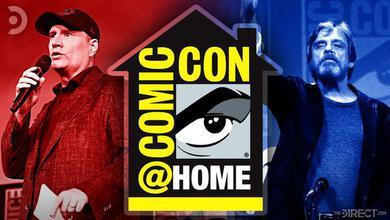 The COVID-19 pandemic has put the entertainment industry on pause. Theater shutdowns have pressured completed films to reschedule their release dates, and projects in the middle of shooting have been forced to postpone production.

States like California have banned events of more than 250 people, meaning the world's entertainment capital could not host popular events like Coachella, E3, and Comic-Con.

While cancellations are expected in the midst of coronavirus, the organizers behind these popular entertainment events have been determined to continue their legacy.

Not even a global pandemic can stop Hall H. Taking to Twitter, the official Comic-Con account cheekily announced that San Diego Comic-Con would take place "at home" this summer, meaning free parking, no lines, and comfy chairs for all. This marks the first time in the international event's 50 year history that it will be held virtually.

Film and television fans rejoice! While theaters are shut down, Comic-Con's virtual continuation gives fans something to look forward to. Despite the uncertainty of Hollywood right now, it is likely that this year's Comic-Con will still debut some variation of new content to quench the taste buds of fandoms everywhere.

Rumors have circulated that The Eternals trailer is ready and waiting, and just yesterday reports came out that WandaVision had wrapped filming. Earlier today reports came out that Temuera Morrison is reprising his role of Boba Fett in season 2 of The Mandalorian. Could we see some early footage from the bounty hunter's sophomore year? Perhaps some set photos from the Scarlet Witch series? The amount of scoops SDCC could provide this year are enough to put Ben & Jerry's out of business.

No one knows what's in store for SDCC on its golden anniversary; however, it's very existence is refreshing. Sure, the convention will be different for those who were planning on attending, but a virtual presentation provides an opportunity for millions around the world who would've been unable to attend in-person. If there's a silver lining that can be drawn in all of this craziness, it's that any footage will be available to view in crisp HD, and fans won't have to break Google with searches for leaked Hall H footage.

San Diego Comic-Con is scheduled to take place virtually sometime in this summer.