DC 'Secret' Mystery Movies Could Be Revealed at FanDome Event

DC Fandome, the new virtual convention for all things DC, is only a couple of months away on August 22nd. Hype is building for the new event with a whole range of DC content set to appear and fans are eagerly anticipating any news, trailers or reveals for their favorite franchises.

While there are other new online conventions emerging for the quarantined world, DC FanDome is set to be the biggest, official online event for DC, particularly as it looks like the brand will be skipping Comic-Con at home. According to the website, the event will be split into hubs featuring panels, fan generated content, a kid-friendly space, comic creators and artists and interactive content.

With Q&A's set to take place across many of DC FanDome's scheduled events, the website (via DC Brasil) is now inviting the public to submit their questions. There's an entire list of categories to choose from, ranging from the Arrowverse to Zack Snyder, which gives a good indicator of some of the content that could appear during the online convention.

But two of the most intriguing topics that have been discovered on the site are for a couple of unnamed projects titled "Secret Movie 1" and "Secret Movie 2". 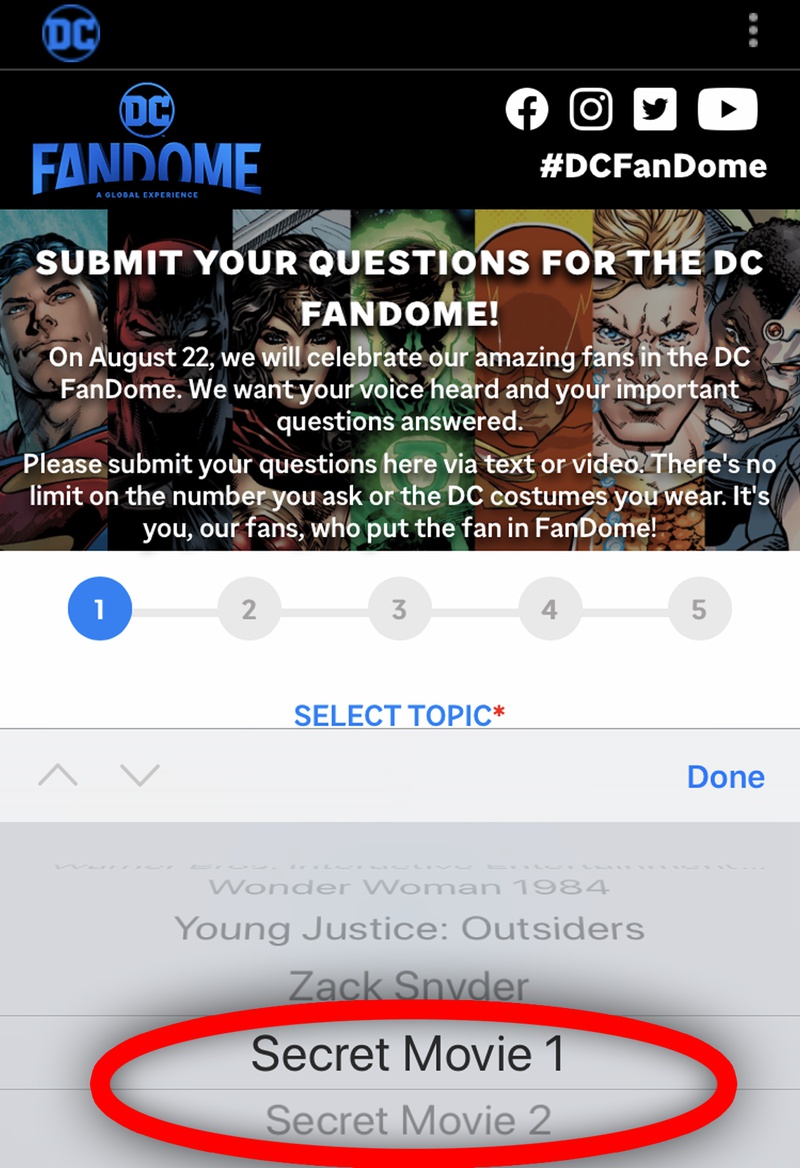 For reference, this option was viewable on the mobile version of the site but couldn't be found on the desktop version at the time of publishing.

Whether this is an error on the part of Warner Bros. on their website or they really are allowing viewers to submit questions for a yet untitled movie, it does signal that some new announcements are in store for DC FanDome. There are a whole range of DC projects in development at the moment, any of which could be dropped at the virtual convention. It could be the upcoming untitled Aquaman sequel or The Flash movie that have been previously announced, or possibly a new property entirely.

The upcoming The Suicide Squad movie is expected to make an appearance at the event and with the impending release of Wonder Woman 1984, it is almost guaranteed to be featured at DC FanDome. Following the hype of the Snyder Cut of Justice League and possible Ayer Cut for Suicide Squad , news about these projects can also be expected. But to find out what these new 'Secret Movies' could be, fans will have to wait until the announcement at DC FanDome in August.