Much of the discussion surrounding Avengers: Endgame's first anniversary last week centered on how fortunate we were that the movie was scheduled to come out last spring and not this one. There have been plenty of speculatory threads and articles all about how that scenario would have played out, and the consensus seems to be that we likely would have had to wait another year or more to see how the Infinity Saga would end. (Can you imagine if we'd had to wait two years or more to see the resolution of Avengers: Infinity War's huge cliffhanger?)

But thankfully, in addition to all of that alternate universe drama - not to mention the hard times we're experiencing in our own universe with the pandemic going on - there was also some fun that was had last week. Various cast and crew members of both Infinity War and Endgame joined Comicbook for a two-night virtual watch party event in celebration of their respective two- and one-year anniversaries. Of course, there were plenty of insights and behind-the-scenes details revealed about both movies, but one thing that was surprisingly absent from the bulk of conversation was how much of the movie correlated to our current pandemic-stricken reality.

I imagine people were simply eager to escape into the world of their favorite superheroes and forget the global crisis for a few hours, but as someone who was watching the film for the first time since its theatrical opening night, the contrast between my pre-COVID-19 vs post-COVID-19 lens of the experience made the film-to-reality parallels really stick out. To me, the beauty of Endgame is that it offers both an escape from reality and some inspiration and comfort in facing it - now more than ever. So let's share the moments that stood out the most in the latter respect.

Because wow, there's a lot to unpack here.

After the dramatic cut to “Five Years Later” twenty minutes into the film, we get a glimpse at what has become of Earth after losing half its population. It was a pretty chilling sight even before this pandemic (I remember getting goosebumps upon seeing some of the shots in the Endgame Super Bowl spot) but there’s an added eeriness to the imagery of empty streets and deserted baseball stadiums now that most of us are social distancing at home and social events all across the world have been canceled for an undetermined amount of time. 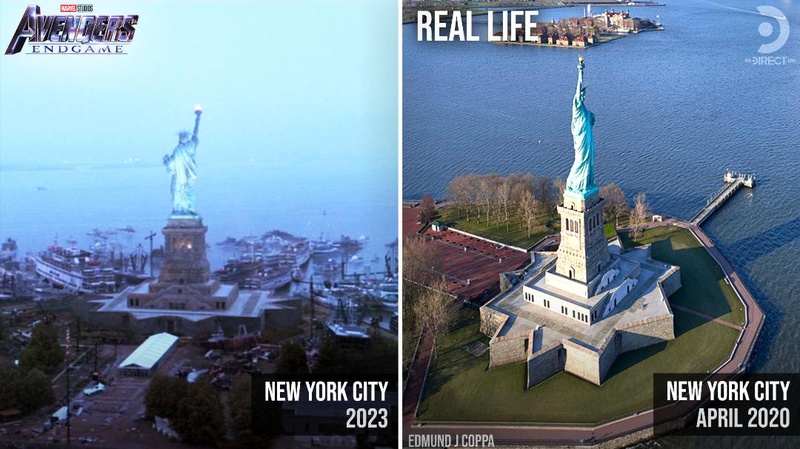 It's kinda of freaky that there are less ships in the harbor in the real-life photo of New York.... 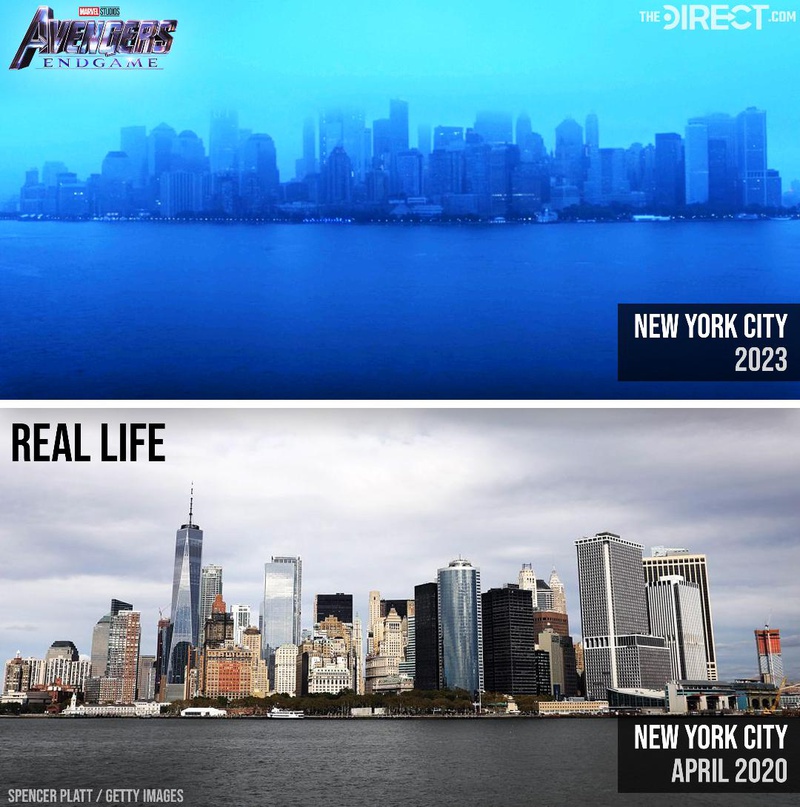 The New York City skyline in the "real life" photo looks rather typical, but the empty water below it feels off. 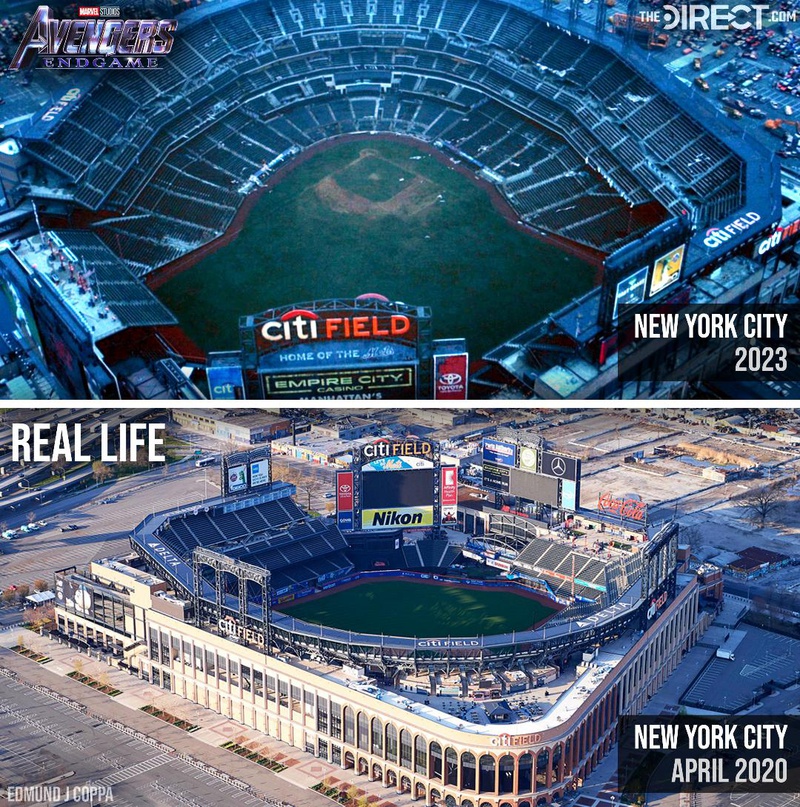 We may not have lost half of our universe, but our baseball stadiums are just as empty as the post-Snap MCU's.

There's not really all that much else to be said about these images, they pretty much speak for themselves. If you want to see what the world looks like now, no need to go outside; just watch certain scenes from the first act of Avengers: Endgame.

There are plenty of Endgame scenes in which the characters discuss the unfortunate state of the world, but one particular interaction hits home in this era of social distancing:

STEVE: “You know, I saw a pod of whales when I was coming over the bridge.”

NATASHA: “In the Hudson?”

NATASHA: “You know, if you’re about to tell me to look on the bright side...um...I’m about to hit you in the head with a peanut butter sandwich.”

While the part about whales in the Hudson River would likely have to be replaced by a comment about the return of fish to water bodies like Venice's Grand Canal, the rest of this exchange feels like it could have been lifted almost verbatim from a typical household pretty much anywhere in the world during this pandemic. Some people, like Steve, have been looking for the beauty and silver linings in the state of the world we're dealing with right now, while others, like Natasha, don't feel up to doing so and might need to deal with their emotions in another manner.

Neither Steve or Natasha is right or wrong in the way they're looking at the situation, and the same goes for all of us dealing with the changes to our lives caused by COVID-19. There are so many different emotions people are experiencing right now, and it's important we let others - especially those we may be living with - know their feelings are valid and that we don't try to force people who are feeling sad or angry to "cheer up" or take the joy away from those who are finding positive sides to the situation (so long as they aren't hurting others).

But these two do have one thing in common in the way they're dealing with the Decimation-caused crisis; like the heroes they are, they're channeling their pain into helping others; Natasha is working with other heroes like Captain Marvel, War Machine, Nebula, and Rocket Raccoon to monitor the lingering effects of the Snap on other countries and planets, while Steve is helping closer to home by leading a support group for survivors. While we may not be able to communicate across galaxies, there are real-life heroes working in hospitals, essential stores, and other key roles to keep society going while much of it is shut down, and there are plenty of ways for those of us who aren't on the frontlines to help out during this crisis. (Just make sure you're taking care of yourself first!)

Captain America delivers an inspiring speech to his fellow Avengers right before they embark on the Time Heist to retrieve the Infinity Stones in hopes of restoring the lives of half the universe. While many Marvel fans have made pandemic-based variations of this speech, focusing on everything from medical professionals and essential business employees heading to work to families attempting to find toilet paper at the local grocery store, there is one line that can be perfectly applied to our current situation with no alterations whatsoever:

Steve Rogers' "Whatever it takes" line is first said in the movie shortly after the Avengers have re-assembled and have prepared to take on the Time Heist mission as a team. Even though some members of the team don't always see eye-to-eye or have fears about embarking on the quest for the stones, they come to realize they're all in it together as a team and all have the same goal...just like our world does in eradicating COVID-19. The mantra "whatever it takes" as used in the film refers to exciting adventures and life-threatening battles, but it's just as applicable to our lives as the world bands together (figuratively, of course - gotta keep social distancing!) to end this pandemic.

And I have to imagine this particular line hits home even harder for those who are considered essential workers and have to face the public every day, going so far as to risk their own lives on a regular basis so they can help society get a handle on this crisis. You are truly the real-life Avengers, and we thank you for your service!

This scene featuring Tony Stark's last message has always been one of my personal favorites from Endgame, and it means so much more now that we’re experiencing this pandemic. While the other scenes on this list have parallels to what we’re currently experiencing, this one shows us what we have to look forward to. We see Clint Barton arrive back on his farm to hug his blipped family and Peter Parker emotionally reuniting with his friend Ned upon returning to school, both of which will likely mirror plenty of real-life scenes that will play out worldwide once we are able to return to work and school and visit our friends and families that aren’t part of our own households. 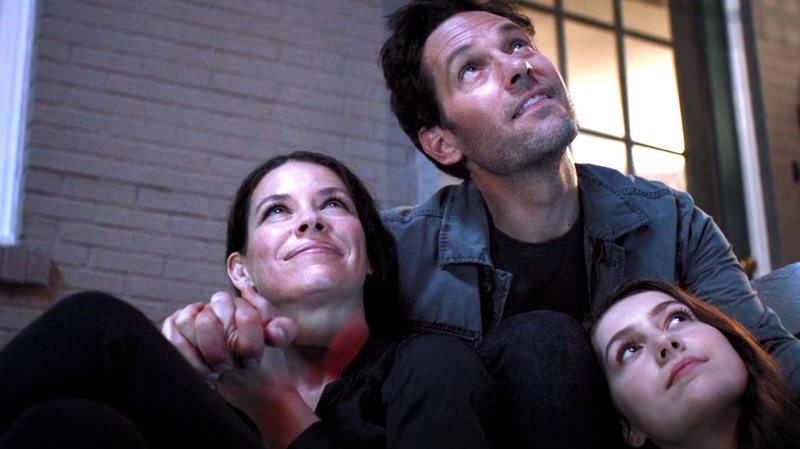 We don’t see any of the characters rushing out to have a giant party in celebration that the battle has been won a la movies like Return of the Jedi (which isn’t a knock on that scene; it’s also awesome). Instead, everyone is just spending some quality time with the people they love most, some watching fireworks from afar, others simply hugging their loved ones as they reunite. This will likely be similar to how a lot of our own first post-pandemic meetings with our friends and families will look; partly because the world won’t go right back to having “normal” large gatherings right away, but also because it seems as though most people miss that sort of face-to-face quality time with the people they love more than anything else we’ve lost during this crisis.

This Endgame scene quickly takes a turn for the bittersweet when Tony Stark’s recording, which he left behind in case he didn’t make it past the mission, begins to play over the montage of reunited characters. So many of us will feel conflicting emotions once the worst of the COVID-19 pandemic is behind us; relief and excitement at the prospect of finally being able to “go back to normal” in some way or another, but at the same time grief for those we have lost during this time or perhaps for the way our world was before this crisis rocked the world. Just like the MCU has been forever changed by the Decimation and later the Blip and the characters are going to have to deal with their new reality, our world will never quite be the same after COVID-19, and we're going to have to deal with it together.

But if Captain America’s assertion of “Whatever It Takes” serves as our motivational mantra during this scary time, maybe this line from Tony at the end of his video message can be our comforting one:

Everything's gonna work out exactly the way it's supposed to. I love you 3000. 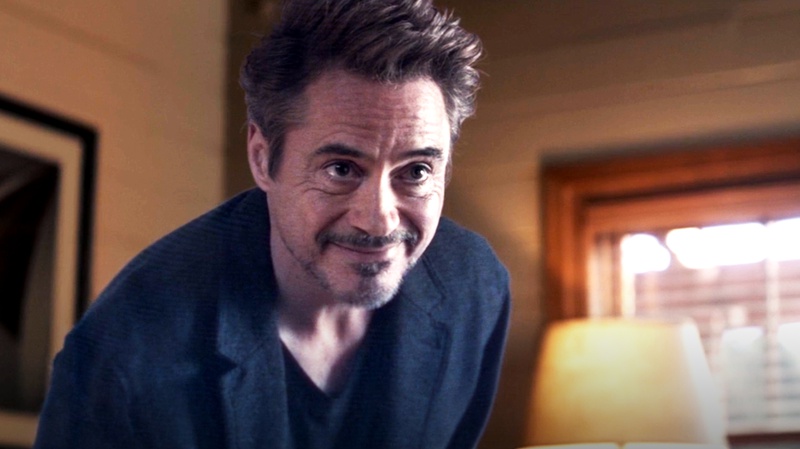