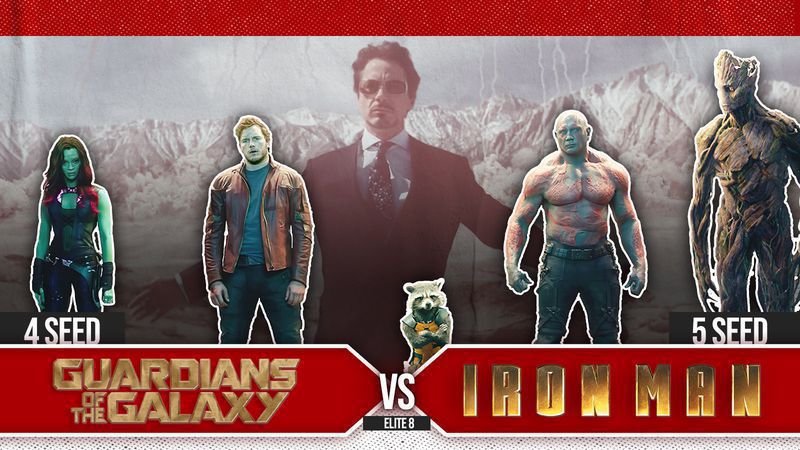 Nine teams entered the MCU Madness Tournament with a first-round bye. Now, because two of them faced each other in the Sweet 16, eight films compete for a chance to move on to the Mount Rushmore of the MCU in the Final Four. From the beginning to the end. From grounded spy thrillers to wacky space adventures. We are going to play the hits. Ladies and Gentleman… the Elite 8.

Our first Elite 8 matchup features arguably the two biggest risks ever taken by Marvel Studios. One movie made with everything on the line and no room for error. The other was made due to the sheer amount of success Marvel Studios was able to build off of that first movie. #5 Iron Man takes on #4 Guardians of the Galaxy.

The movie that started it all. The story of Tony Stark escaping captivity and going on to become the face of the Super Hero world. Robert Downey Jr. becomes an instant classic in the first-ever MCU film.

From the very first scene with Tony Stark having a cocktail in a HUM-V, we immediately begin to fall in love with the genius, billionaire, playboy, philanthropist. Using his big brain to do as much good as he can to right his wrongs and do more than make things that blow up. We have all seen the hero that lets the person underneath become the real mask. But Tony changed everything by being himself and standing in front of the world to say: I..Am…Iron Man.

Right from jump street Kevin Feige and co. started the MCU trend of perfect casting paired with the perfect director. And what RDJ and Jon Favreu were able to do is tell a story that made the man inside the suit and outside the suit equally important. Looking back, this is the tone-setter that introduced the foundation of Marvel’s combination of action, comedy, storytelling and character development. And at the end of it all, our very first post-credit scene opens to door to what is now the Marvel Cinematic Universe.

Why should Iron Man beat Guardians of the Galaxy?

It is hard to imagine, but when this movie was being made it was a massive risk for everyone involved. What would soon become Marvel Studios had one real shot to take a B-List character and build an empire around him. Due to the risk that was taken here with Iron Man, Feige was able to take more risks in the future. And even after all these years and almost two dozen movies later, it is still considered one of the best to ever do it.

After being abducted by aliens as a child, Peter Quill becomes a self-proclaimed legendary space outlaw known as Starlord. After coming together with a group of fellow outlaws, one of the most dynamic, charismatic and downright absurd teams in movie history is born.

We’re the Guardians of the Galaxy, Bitch!

Those outlaws are brought together to join forces under one common goal... money. We are introduced to 5 characters with completely unique backgrounds and skills and by the end of it, it feels like we have known them our whole lives. We watch the Guardians experience individual character arcs that intersect just in time to defeat their foe. All the while being arguably the most charming group of characters we have ever seen.

Many believed when this movie was being made that the MCU was flying high on all of The Avengers money and this was going to be the dud that everyone had been waiting for. To take expectations like that and come out the other end ranked higher than Iron Man? That further cemented the trust Marvel Studios earned to make a great movie out of anything. This was a story outside of the main cast of characters that comes back to be one of the most important in the Infinity Saga. Guardians, Kree, Infinity Stones, and of course…Thanos.

Why should Guardians of the Galaxy beat Iron Man?

If you would have told me that you were going to introduce a space outlaw formerly known as Andy Dwyer, a green-skinned warrior assassin, a former heavyweight champion of the world, a talking raccoon and his tree friend and that I was going to end up caring deeply about each of them, I would have called you crazy. Yet James Gunn did exactly this with this one movie. While every MCU movie has a flavor of comedy and charisma that sets the universe apart, Guardians gives us the next evolution of that style in the greatest way. And it would be a crime not to mention how perfectly this movie uses music to not only help tell the story but also resonate with audiences worldwide.