The 2017 theatrical cut of Justice League is obviously much maligned throughout the DCEU fanbase. So much so, that after months and months of fans campaigning for Warner Bros. to "Release the Snyder Cut" and allow the original director of the film to realize his vision, WB finally caved .

"The Snyder Cut" of Justice League is set to be unleashed upon HBO Max in 2021, but for right now, fans will need to subsist on Zack Snyder's posts about the film on the social media platform Vero.

Taking to Vero users today to briefly respond to some specific questions surrounding his version of the DC superhero movie, Zack Snyder had the following to offer when asked about specific scenes that were present in director Joss Whedon's theatrical cut (via Reddit ): 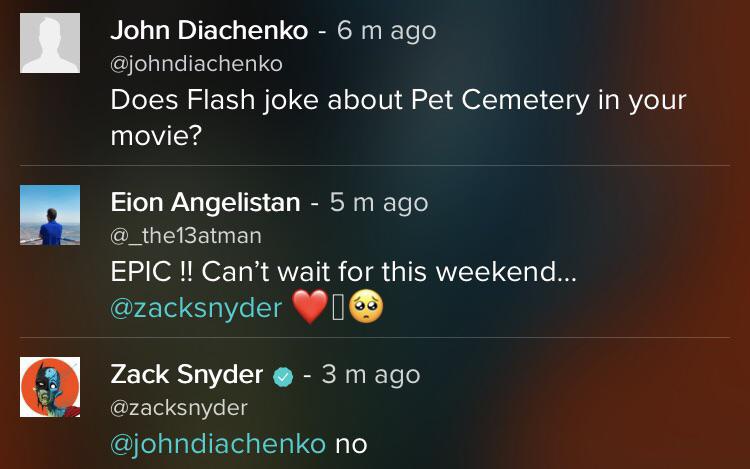 These two moments, which were present in the regular release of Justice League, were certainly divisive among fans, in particular the one mentioned in the first comment above.

For those who may not remember, both lines of dialogue occur in the sequence where a freshly-resurrected Superman goes berserk and attempts to do harm to the other heroes. As the Man of Steel quickly overpowers Batman, he utters the line "Tell me, do you bleed?" mirroring the scene where the Dark Knight says the same thing to Superman in 2016's Batman v. Superman: Dawn of Justice.

It should come as some comfort to those who found fault with those pieces of dialogue to know that they are not present in Snyder's version.

The Snyder Cut is expected to get its first full trailer this weekend during DC FanDome , DC's online, virtual comic con.