The Falcon And The Winter Soldier, WandaVision And Loki Synopses Revealed 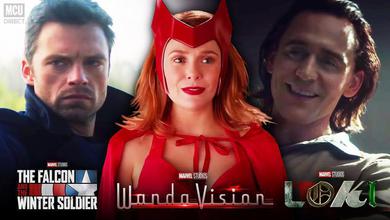 Marvel Studios revealed the first look at The Falcon And The Winter Soldier, WandaVision and Loki at the Super Bowl in the 30-second Disney+ “Big Game” spot. Disney has now released an official synopsis for each series, teasing what fans can expect to see from the Disney+ shows.

The following synopses were officially released by Disney:

THE FALCON AND THE WINTER SOLDIER

Following the events of "Avengers: Endgame", Sam Wilson/Falcon (Anthony Mackie) and Bucky Barnes/Winter Soldier (Sebastian Stan) team up in a global adventure that tests their abilities—and their patience—in Marvel Studios' "The Falcon and The Winter Soldier." The all-new series is directed by Kari Skogland; Malcolm Spellman is the head writer. Debuts on Disney+ this fall.

Marvel Studios' "WandaVision" blends the style of classic sitcoms with the Marvel Cinematic Universe in which Wanda Maximoff (Elizabeth Olsen) and Vision (Paul Bettany)—two super-powered beings living their ideal suburban lives—begin to suspect that everything is not as it seems. The new series is directed by Matt Shakman; Jac Schaeffer is head writer. Debuts on Disney+ this year.

In Marvel Studios' "Loki," the mercurial villain Loki (Tom Hiddleston) resumes his role as the God of Mischief in a new series that takes place after the events of "Avengers: Endgame." Kate Herron directs and Michael Waldron is head writer. Debuts on Disney+ next year—2021.

The Falcon and The Winter Soldier's synopsis teases that Sam Wilson and Bucky Barnes' adventure will take them far beyond America in the series. The Superbowl spot showcased an unknown desert, which featured in a scene where Sam was being attacked during mid-flight.

The synopsis also suggests that this series will test Sam and Bucky's abilities and patience. Wilson can be seen practicing with Captain America's shield in the Super Bowl Spot. Rumors suggest that the U.S. Government will confiscate the shield from Wilson in the series,

Apparently, the government doesn't see Wilson as a worthy successor to Steve Rogers. If true, one can only assume that Sam won't take this betrayal lightly, as he was personally entrusted with the shield by Steve in Marvel Studios' Avengers: Endgame.

Helmut Zemo's return can also be seen in the Superbowl spot, which will clearly test Bucky's patience in the series. Zemo was the former soldier that manipulated Barnes into attacking his friends in Marvel Studios' Captain America: Civil War.

WandaVision's synopsis doesn't reveal too much about the series, but it does tease that fans can expect to see an insane blend between classic sitcoms, like The Dick Van Dyke Show, and the epic action and adventure that audiences have come to expect from Marvel Studios. The synopsis also suggests that not everything is as it seems in the series, possibly indicating that this classic sitcom-like reality is all just an illusion inside Wanda's mind.

The synopsis for Loki, unfortunately, reveals nothing new about the upcoming series. Although, during San Diego Comic-Con 2019, Marvel Studios president Kevin Feige stated that the series will be set in a newly created timeline. This is the direct result of when Loki stole the Tesseract from 2012 during the Time Heist in Avengers: Endgame. Actor Tom Hiddleston also revealed to MTV News that Loki will face off with more formidable opponents in the series.