The DC Extended Universe has used the art of the director's cut in recent weeks to bring excitement to its fans at levels almost never seen before. This has been largely pushed forward by director Zack Snyder, who made the massive announcement that his cut of 2017's Justice League will finally make its way to HBO Max mid-2021.

This cut has been talked about ever since the theatrical release of the original film, for which filming was finished by Joss Whedon after the tragedy that fell upon Snyder. The first new footage was released in a short trailer almost three weeks ago, which is the only new footage from the director's cut released thus far. Thanks to a new social media post, there may be a sign as to when more Snyder Cut action will see the light of day.

In a new post from Vero, via Reddit, director Zack Snyder was asked by a fan if a new teaser for the Snyder Cut of Justice League could be expected before August 22. Snyder teased something potentially coming soon in his response: 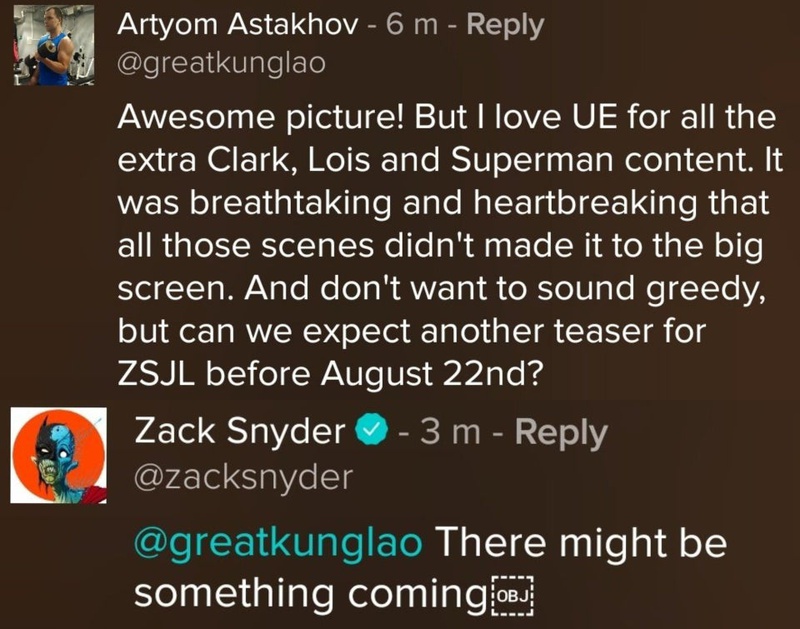 While Snyder didn't give any specific details regarding when exactly the new teaser would arrive, this should keep DC fans on high alert over the next few weeks. After the recent release of the Ultimate Edition of Batman V Superman: Dawn of Justice on HBO Max, chatter about the Snyder cut has been ramped up once again as fans go to HBO Max to enjoy the DCEU's first director's cut.

The Snyder Cut has also gained even more momentum over this past week thanks to the Joss Whedon/Ray Fisher debacle in which Fisher accused Whedon of abusive behavior on the set of Justice League. Whedon's name has been furiously dragged through the mud the last few days, although no specific details of his actions were revealed; the accusations come right in the midst of all the excitement for the Snyder Cut's release.

Fans are hoping to see new footage from Zack Snyder's Justice League at both July's virtual JusticeCon event and August's DC Fandome. The Snyder Cut is set to make its debut on HBO Max sometime in mid-2021.