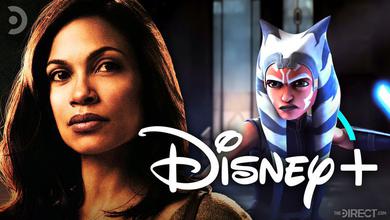 It's been quite the year for Ahsoka Tano. Anakin Skywalker's former Padawan just completed her journey in the milestone seventh and final season of Star Wars: The Clone Wars, which culminated in her escape from Order 66. An animated sequel to the hit series Star Wars Rebels is rumored to drop in the fall and will reportedly feature Ahsoka and Sabine Wren as they search for the missing Ezra Bridger.

For months, it's been heavily rumored that Tano would be making her live-action debut in the second season of The Mandalorian, played by Rosario Dawson, and we shared that the actress had signed a multi-show contract. The fan favorite has come a long way since first hitting the screen, and a recent rumor indicates that her future may be even brighter than we think...

Daniel Ritchman shared via his Patreon that an Ahsoka Tano series of some kind is in development. The medium of the show was not specified, but it is actively in the works for Disney+.

While Ritchman didn't specify the nature of the series, the odds are pretty good that this one will be live-action. Ahsoka's animated journey will continue to be covered in the Rebels sequel, should that rumor pan out, and Dawson's multi-show contract indicates we'll be seeing much more of the former Jedi in live-action.

Dawson's appearance as Tano in The Mandalorian has been said to serve as a backdoor for her to appear in other live-action series, even her own, and a Dave Filoni-run live-action Ahsoka show wouldn't be surprising in the slightest. As always, we'll treat this development as a rumor, and should it pan out fans can likely expect to hear official details following Ahsoka's debut in The Mandalorian.