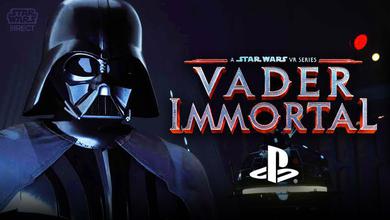 The Force is especially strong on this May the Fourth. In addition to The Rise of Skywalker’s early Disney+, the end of The Clone Wars, and the release of Disney Gallery: The Mandalorian on Disney+, it seems even more Star Wars content is on its way. Fans of "Vader Immortal: A Star Wars VR Series" by ILMxLAB know that this VR experience allowed users to feel what it would be like to wield a lightsaber and confront Vader himself.

The series was divided into three episodes and was set in the time period between Revenge of the Sith and Rogue One: A Star Wars Story. The first installment was released on May 21, 2019 on the Oculus Quest as an exclusive and concluded with the final episode’s release later in the year on November 21. Well, it seems that more fans will soon have the opportunity to visit Mustafar...

As a special announcement for May the Fourth, ILMxLAB announced "Vader Immortal: A Star Wars VR Series" is combining all three episodes of series into one purchase and PlayStation VR this summer. According to Mark Miller, the Executive Creative Producer at ILMxLab, “We are very excited to be partnering with Sony to bring Vader Immortal to PlayStation VR.”

While Miller hasn’t provided an exact release date, all three episodes of the series will be available upon release for PlayStation VR. Also, users will still have access to all lightsaber dojos and to wield the various lightsaber hilts of Darth Maul, Ahsoka Tano, Luke Skywalker, and Kylo Ren.

The release of Vader Immortal on PlayStation VR will allow even more fans the opportunity to not just play as a Star Wars character but feel what it is like to be in the Star Wars universe. If the success of this experience continues, fans may see more exciting stories and experiences from ILMxLAB in the future.