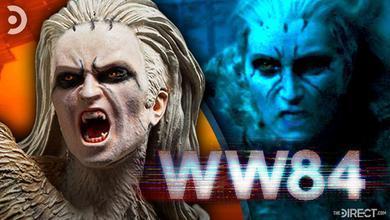 It remains to be seen if Wonder Woman 1984 will actually premiere this October due to the numerous delays brought about by the ongoing health crisis. Still, the Gal Gadot-led sequel made an impression during DC FanDome by revealing new story details as well as a full-blown trailer.

The trailer footage highlights the film's story and exciting action pieces, but the biggest takeaway is the first look at Kristen Wiig's final form as Cheetah. Previous promotional material for Wonder Woman 1984 only showed glimpses of Cheetah, but the trailer outdid all of them by showcasing the standoff between the villain and Wonder Woman wearing the Golden Eagle armor. As expected, this unexpected reveal left fans with exciting reactions on social media.

And now, a collectible figure featuring the final form of the villain has emerged.

The collectible figure managed to highlight the feline villain in a fiery way, showing off her sharp claws and fangs in the process: Pre-order now

A closer look at the figure shows even more cheetah-like features, such as a tail and heavy feline fur. The figure's stance also reveals the superhuman agility and strength of the villain by leaping into battle: Pre-order now

This collectible figure shows off the physical prowess and an impressive comic-accurate look of the villain. The final form of Cheetah was briefly featured during the final moments of the trailer, but there was low lighting during the footage that was shown. No doubt, this collectible figure should provide fans with a closer look at the villain in all her fierce glory.

Based on the film's trailer, it seems that Barbara Minerva will ultimately be swayed by the influence of Pedro Pascal's Maxwell Lord, leading to an eventful showdown between her and Wonder Woman. Wiig's Cheetah should serve as a formidable opponent to Diana since it prompted the latter to don an armor upon facing the villain. If anything, this further elevates the hype for the showdown while also giving Wonder Woman a reason to not take Cheetah lightly.