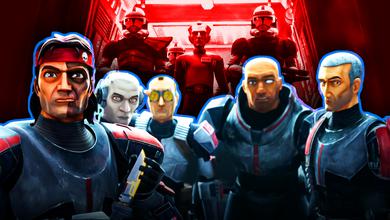 The new 16-episode series appropriately debuted on May the 4th with an action-packed debut titled "Aftermath."

This 70-minute episode revealed Crosshair, one of the members of Clone Force 99, was affected by the inhibitor chip and Order 66 while his brothers were not. This resulted in him turning on the crew when they chose not to follow Grand Moff Tarkin's orders.

"Aftermath" also introduced the character of Omega, a young female clone who escaped Kamino with the four remaining members of Clone Force 99 to find their way in a rapidly changing galaxy.

But, if "Aftermath" set the course for Clone Force 99's journey through the series, its second episode titled "Cut and Run" only offered a peek at what's to come while telling an all-too-familiar story.

Even though Episode 2 was a significantly shorter episode in comparison to the series premiere, its half-hour runtime felt longer.

Instead of crosscutting storylines that jump back and forth between characters and locations, "Cut and Run" took a breath and focused on a single story.

Granted, that's not a bad thing, especially in light of the rapid-fire chain of events from the debut episode. But, unfortunately, it may not have been the best choice.

The storyline for "Cut and Run" is a trope audiences (and possibly Star Wars fans in particular) are all too familiar with. And, while any episode would've struggled to follow "Aftermath," this episode did too little to avoid being labeled as filler.

In addition, Clone Force 99's leader, Hunter, continues to be the primary focus of the show with Omega sharing the spotlight while the other members of the team remain relegated to sidekicks.

This wouldn't be a problem if the show wasn't called The Bad Batch and if it didn't include Echo, a clone whose story fans have been invested in longer than Hunter, Omega, and the rest of the cast.

Considering Echo's history and the fact he had relationships with the clones carrying out Order 66, there should've been more of a reaction from him. The fact that it's easy to forget he's even part of the show at times simply doesn't gel with all that came before in The Clone Wars.

Hopefully, both he and the other clones will get their day further into the sixteen-episode season.

Where "Cut and Run" does succeed is in highlighting the changing state of the galaxy and offering a preview of Imperial threats to come. The show's focus on the transition from Republic to Empire, which fans hoped the series would explore, is, so far, doing just that.

The episode also dropped a few more breadcrumbs about the mystery surrounding Omega.

Hopefully, Filoni and the show's creators have a twist in mind in the tradition of those from The Clone Wars and now The Mandalorian instead of what appears to be the obvious answer. But, for now, only time will tell.

And again, while the show would benefit from its cast receiving equal attention, this episode's emotional element and its focus on a relationship does help give this ragtag crew of mercenaries heart; it continues to sell the fact that Clone Force 99 is the group to tell the story of the rise of the Galactic Empire.

Last but not least, Dee Bradley Baker, who remarkably voices all the clones in The Bad Batch, continues to amaze with his ability to add distinction and personality to each of the clones.

Even if the second episode failed to live up to the hype, the show's animation style and cinematography kept to standard, proving quality Star Wars visuals aren't just for live-action or the big screen.

DID THE BAD BATCH COMPLETE THE MISSION?

Much like The Clone Wars, The Bad Batch continues to serve as a visual narrative of the history of the galaxy through the perspective of the clones. But, this time, the very purpose for which the clones were created no longer exists.

This is why there is such potential for incredible storytelling within this series. The studio has never been better, given what they were able to produce for Season 7 of The Clone Wars.

However, it's still a little too early to tell if that will translate into the season's remaining fourteen episodes, and whether the choice of a filler episode so soon after the series debut will be able to keep the casual audience's attention.

New episodes of Star Wars: The Bad Batch premiere every Friday on Disney+.