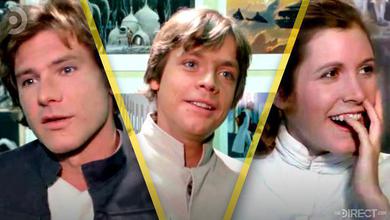 40 years ago, Star Wars: The Empire Strikes Back debuted in theaters and quickly became the fan-favorite of many hardcore fans of the franchise. The well-acclaimed sequel to Star Wars: A New Hope is often regarded as the best of all of the Star Wars films since it's jam-packed with many iconic moments along with delivering one of the shocking twists of the longstanding franchise. The Empire Strikes Back is a unique entry to the Skywalker saga as it proved true to its title with the villain emerging victorious at the end.

To celebrate the 40th anniversary of Star Wars: The Empire Strikes Back, Star Wars officially released an exclusive video to "revisit the production on the film" which showed behind-the-scenes footage and interviews featuring George Lucas, Carrie Fisher, Mark Hamill, Anthony Daniels, Billy Dee Williams, and some of the creative team. You can check out the video below:

Travel back with us as we revisit production on the film with exclusive behind-the-scenes footage and interviews ft. George Lucas, Carrie Fisher, @HamillHimself, @ADaniels3PO, @realbdw, and more of the cast and creative team. #ESB40 pic.twitter.com/cn3zJ6TXpL

The video was a trip back to memory lane as it looked back on the good times of the cast and crew during the production of Empire Strikes Back. In the video, George Lucas described the movie as "a much more dramatic film" since the sequel took to a much more serious tone, which demonstrates the shift of the upbeat tone from Star Wars: A New Hope. Interviews from the cast should bring nostalgia to fans as the franchise's iconic stars took turns in sharing their experience when making the iconic sequel.

The video also managed to highlight the hardworking crew that helped Empire Strikes Back become one of the most beloved films of all time. From Hamill jokingly teasing the romance between Han and Leia in the film to Billy Dee Williams' reflection of Lando Calrissian's debut in the franchise, there are many interesting tidbits from the video that is sure to delight hardcore fans. Fans can watch Empire Strikes Back on Disney+ to join the celebration of the film's 40th anniversary.