It's been a bit of a quiet period for Star Wars recently. After a big May the 4th with confirmations coming from both Lucasfilm and filmmakers alike, the news cycle for the popular franchise has been filled with an onslaught of rumors and reports from several outlets, with actual confirmations from the company few and far between.

Last December, Lucasfilm announced the makings of a new show titled Jedi Temple Challenge , a kids game show that would be premiere this June on Disney+, with Ahmed Best as the host. Though the show was supposed to illustrate "harrowing obstacles and a hero’s triumph over challenges," new information about the project was scarce, which was odd as June is slowly approaching.

As the fandom patiently waited, Ahmed Best gave an update in an insightful interview back in April, when he states the show will bring back the belief in the Force and the mythology surrounding it. Now, a new trailer gives fans an all new look at the series...

A trailer was just released on the Star Wars Facebook page , offering a first look at the Jedi Temple Challenge . Children with the title of Padawan will face various tests and obstacles, with the video focusing on challenging their skills of strength, knowledge, and bravery to determine if they are worthy of becoming Jedi Knights. They will be split into teams, with only one coming out as the victor. The show will premiere on Star Wars Kids instead of Disney+ on June 3rd. The trailer was also uploaded on the official Star Wars Twitter account and can be viewed below:

Knowledge. Strength. Bravery. Young Padawans must test their skills in a series of trials designed to see who is capable of becoming Jedi Knights. Join us for #JediTempleChallenge, premiering next week, 6/3, on Star Wars Kids: https://t.co/ukDNwf7Ckn and https://t.co/s8fIRJ01qc pic.twitter.com/SJ2zFrvvMg

A new official poster for the kids' series has also been revealed: 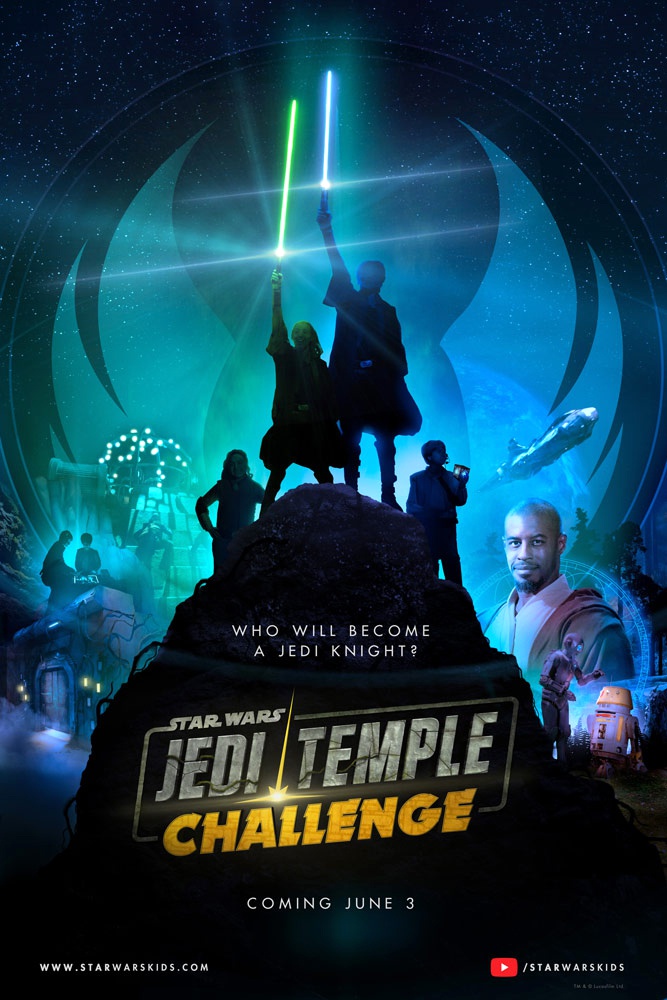 After not seeing many details emerge from Lucasfilm after the show’s announcement back in December, it’s nice to finally see some footage from the Jedi Temple Challenge . Just as Mickey Capoferri, Lucasfilm's senior director of Online Content and Programming, stated in that announcement, the trailer displays the three separate locations where the Padawan's will test their ability in the Force: a forest planet, a Jedi star cruiser, and inside the Jedi temple itself.

The series seems to really be shooting for a Survivor -like show, in terms of the challenges, with a blend of kids and Star Wars, which is a perfect combination to catch the attention of a wider audience. Becoming a Jedi Knight in the franchise is no easy task, and it seems Jedi Temple Challenge will be sticking to that philosophy in the game. Not only is this new challenge expanding the Jedi Training Academy that's continued at Disney's theme-park locations, but it appears to be keeping the spirit of imagination and belief of the attraction while also bringing it right into your living rooms.

It's also great to see Ahmed Best as the host of the show. After the all the hate he received from playing Jar Jar Binks in the prequel trilogy, and the years of depression that followed, it's very welcoming to see the skilled actor get a chance to play a Jedi Knight and be a part of this new era of Star Wars.

It's interesting that the medium of which the series is released has changed from "exclusively on Disney+" to the Star Wars Kids Youtube and website page, but it's a smart move to make it available to everyone instead of limiting it to those specific viewers. Be sure to check out Jedi Temple Challenge next week on Wednesday, June 3rd!