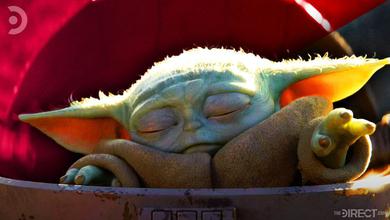 It's 2020, which means we're living in the year of delays. COVID-19 has had an unprecedented effect on the entertainment industry, and specific to Star Wars, has halted the productions of the Cassian Andor and Obi-Wan Kenobi series. Disney recently announced that many of their upcoming theatrical films have each been pushed back a year, including the slate of planned Star Wars films.

Del Rey books have seen delays this year for a variety of reasons, most notably with The High Republic novel Light of the Jedi being pushed from August to January 2021. Chaos Rising, the first book in Timothy Zahn's Thrawn Ascendancy trilogy, was initially set for May before being bumped back to October due to scheduling, and now finally set to land on September 1. A line of books based on The Mandalorian were announced in June, but Del Rey's novel has been bitten by the delay bug...

Del Rey has announced on Twitter that their title in the forthcoming The Mandalorian publishing program has been delayed from December 2020 to Fall 2021:

Quick scheduling update, friends! Del Rey’s Mandalorian novel will be moving to fall 2021. As soon as we have a final date, we’ll let you know. In the meantime, we have some amazing Star Wars novels coming soon that should help tide us all over!

The novel's author, Adam Christopher, also took to Twitter to ease the pain of the delay:

Ah, the wonders of an ever-changing publishing schedule! Fear not, fellow Covert members! THE MANDALORIAN will hit the shelves next year, and you will *not* be disappointed. https://t.co/laHiLs7fVf

It's unfortunate that the novel was delayed, but there's little more to say beyond that. The world of publishing can be crazy and schedules always change, so we'll just have to take this in stride. Pushing the novel back nearly a year is a bit perplexing, but it's safe to say that there will be plenty to hold us over in the meantime.

We're still not sure what specifically this book will entail. The novel is a tie-in to The Mandalorian, so this tale could follow the journey of any character involved, whether it be Din Djarin, Cara Dune, or even Moff Gideon. Christopher's tweet could imply that the Mandalorian Covert will be involved, but it's still too early to tell. Whatever it may be, Fall 2021 will be an exciting time for Star Wars readers.