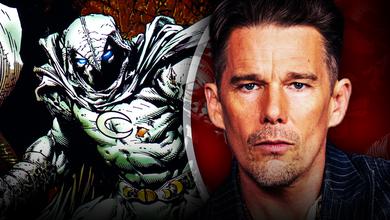 Even though Marvel Studios' new content won't be coming back until just over a month from now, there is some major progress being made behind the scenes on multiple Phase 4 entries. This includes nearly a dozen entries on Disney+ such as Oscar Isaac's Moon Knight, which fans have wanted in the MCU for some time.

With this show not set to come onto Disney+ until some time in 2022, filming is in its earliest stages right now in Budapest.

The first look at locations for this project revealed some kind of major plot moment happening within the Museum of Fine Arts in Budapest, although no specific plot details are known yet.

However, fans now have their first look at an actor involved in those scenes, teasing his first appearance within the MCU...

A NEW LOOK AT MOON KNIGHT

Hawke was shown sporting his long brown hair while dressed in a fully brown outfit. It was also said that Hawke was carrying a walking cane, though it's not visible in the shot.

The full set photo can be viewed below:

ethan hawke on the set of moon knight everybody screamed everybody said something pic.twitter.com/awGNgvPvMz

WHO WILL ETHAN HAWKE PLAY?

With the photo not showing all the details of Ethan Hawke's Marvel costume, it's tough to pin down exactly who he will play opposite Oscar Isaac's Marc Spector. However, there are already some theories floating around regarding his appearance.

One idea is that the role he's playing is Dracula based on the hair and suit, which could fit considering the mythical surroundings of this series as a whole with ancient Egyptian mythology coming into play. This character could even transition into future projects like Blade, should Marvel want Hawke to stick around for a while.

It will likely be some time until Hawke's role is officially revealed with so much time before the series makes its debut. However, these pictures set the stage for something very exciting within the MCU. That excitement could ramp up even more once fans get their first look at Isaac's in character.

Moon Knight is currently filming and will release on Disney+ in 2022.