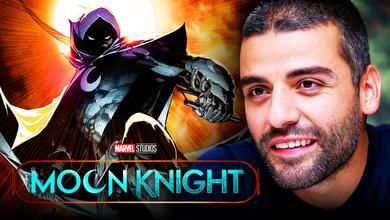 For as jam-packed of a year as Marvel Studios is having on screen with Phase 4 of the MCU, behind the camera promises to be just as busy. A combined dozen new movies and Disney+ shows are in the works for a 2022 release, including multiple sequels and more than a handful of characters coming to life for the first time.

One of the most highly anticipated new heroes is coming in the Disney+ series Moon Knight, which will dive fully into the supernatural realm of the Marvel Cinematic Universe by showcasing a hero unlike any others in the franchise to date. Star Wars alum Oscar Isaac will bring the complex personas of Marc Spector to the streaming world, taking his skill-set from a galaxy far, far away into the gritty streets of Jewish America.

Moon Knight was previously reported to be set to begin production in March 2021 in Budapest, Hungary. It's not confirmed whether filming has started, but fans are hopeful that exterior filming in the Hungarian capital could lead to set photos that provide the first look at Isaac suited up as his MCU hero.

ISAAC SUITING UP FOR THE MCU

Even though Disney is the only entity that has never officially confirmed that Isaac is playing the titular role, the writing seems to be on the wall.

Isaac is set to be the focal point of this new Disney+ series as he stars alongside huge personalities like Ethan Hawke in his undisclosed villainous role. Additionally, May Calamawy is reportedly playing a key character in the series. Moon Knight is set to tackle a number of unique plot points the MCU has never seen before. The project is set for a deep dive into Jewish culture and a hard look at mental illness, specifically with Marc Spector's Dissociative Identity Disorder.

Wit Moon Knight being likely at least a year away, the next few months of 2021 will hold plenty of work for Isaac and his coworkers as they ramp up production on Isaac's MCU debut. There are still no signs pointing to what specific plot will be utilized, but that only adds to the mystery and intrigue behind the enigmatic anti-hero.

Moon Knight is likely set to begin shooting in the next few weeks before it releases on Disney+ in 2022.