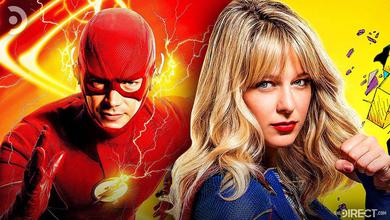 DC FanDome is rapidly approaching, with new promotional material coming seemingly by the day. In the past week alone, news has been released regarding timing details for the event, names of celebrities that will be in attendance, and even TikTok videos from some of the biggest stars in the DC film and TV world.

Nearly every upcoming project over the next few years from DC will be highlighted at the event, including blockbuster movies and popular TV shows. Even more material has just been added to that collection, this time promoting the ever-expansive Arrowverse.

In multiple posts from the CW Network's various Twitter pages, three brand new posters featuring different heroes from the Arrowverse have been released eleven days ahead of DC FanDome. The three heroes are featured in front of multiple classic comic panels from each of their characters' history. All three can be seen below:

All three shows have built up quite the following over the last few years after Arrow got the ball rolling back in 2012. The Flash is going into its seventh season, Supergirl into its sixth, and Black Lightning into its fourth.

All three shows should have plenty of material to show fans before their upcoming new seasons on the CW, and all three actors have been very active in helping to promote their series alongside the major DCEU blockbuster movies. The highly interconnected Arrowverse, consisting of seven different shows in total, has been one of the CW Network's biggest hits and continues to go strong into 2020 and beyond.

DC FanDome is set to begin at 1PM PST on Saturday, August 22.