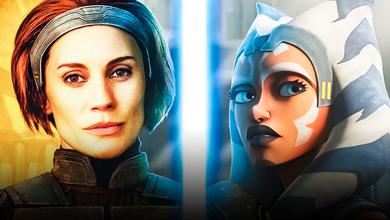 The Mandalorian Season 2 is poised to expand Star Wars lore even further, especially after the confirmed appearances of Boba Fett and Bo-Katan as well as the looming inclusion of Ahsoka Tano. With so much to unpack, it's clear that The Mandalorian will only get better during the next wave of episodes, and this bodes well for the galaxy far, far away.

Before her live-action debut, Bo-Katan was one of the main subjects of rumors online, with some even speculating that a Disney+ spinoff show might very well be in the works for the famous Mandalorian. Not only that, Katee Sackhoff, the actress who portrays Bo-Katan in both live-action and animated format, was visibly excited regarding her involvement with the hit Star Wars show.

From that point on, Sackhoff has been offering clues about the future of her Star Wars character. And now, another tidbit about Bo-Katan was revealed by the actress in a recent interview.

While speaking with Deadline, Bo-Katan actress Katee Sackhoff opened up about the key moment where her character asks Pedro Pascal's Mando about his quest to find the Jedi. The actress revealed that "there is some sort of history" with Bo-Katan and the Jedi while also teasing that what Bo-Katan specifically means by that "is not for anyone to know yet:"

“To say that she had a good relationship with the Jedi is a bit of an overstatement. I think that there is some sort of history there [with the Jedi]. What Bo-Katan specifically means by that is not for anyone to know yet.”

Moreover, Sackhoff also shared insight about the importance of the Darksaber, hinting that "there's so much lore about it."

"For Bo-Katan, the darksaber represents so much, there’s so much lore about it, but at the same time, it’s in her mind and based on history; it’s the way to bring together the people of Mandalore and the way to rule and respect that is by earning it."

Bo-Katan had a prominent role during Star Wars: The Clone Wars and a notable guest appearance from Star Wars: Rebels, but it's clear that there is a looming mystery surrounding the character's past in-between those animated series', as well as during the events of the original trilogy of the Skywalker Saga.

Based on what Sackhoff teased, it's possible that The Mandalorian could provide more details about Bo-Katan's history with the Jedi, potentially showcasing the Mandalorian's role during the fight against the Empire. Earlier rumors suggest that a spinoff show revolving around Bo-Katan and Cara Dune could happen, and this could lay the groundwork for that series to explore more of the character's past with the Jedi.

In addition, the Darksaber's role in the narrative of The Mandalorian is all but confirmed to be addressed during the latter part of the season. Based on Sackhoff's remarks, it's clear that Bo-Katan will play a heavy role in that plot point. It's likely that the endgame of The Mandalorian might potentially lead to bringing together the people of Mandalore, with Din and Bo-Katan at the forefront.

Given that, the hype surrounding the next batch of episodes of Season 2 is at an all-time high, and fans will tune in to find out what's next for the galaxy's famous runaway duo.