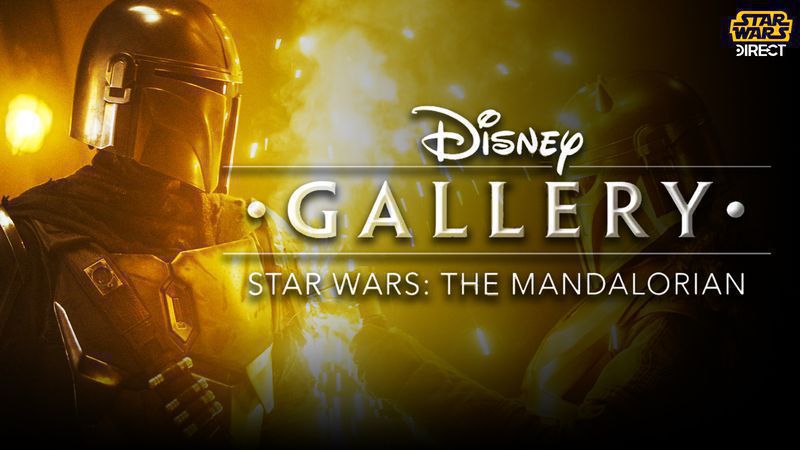 The first season of The Mandalorian was a huge success for the launch of Disney+ back in November of 2019. Having new episodes come out weekly instead of all at once kept the show in the mainstream news for an extended period of time, and the headlines keep rolling in. Back in February, Lucasfilm and ILM released a short behind-the-scenes look at the production of the visual effects from Season 1. Additionally, reports about The Mandalorian's second season have been exponential, including news that Rosario Dawson will guest star as Ahsoka Tano, both Michael Biehn and Bill Burr's Season 1 character might make an appearance, and that the series will showcase the unexpected return of Ming-Na Wen as Fennec Shand. As fans wait for more confirmation and first-looks from The Mandalorian Season 2, which is set to stream this October, it looks as though Disney+ is here to hold them over until then.

This morning Lucasfilm made public, via the Star Wars Twitter page, the upcoming release of an eight-part documentary series focused on the production of The Mandalorian. The show is titled Disney Gallery: The Mandalorian, and the first episode will be available to stream on Disney+ Monday, May 4th, followed with new chapters every Friday.

Pull back the curtain on #TheMandalorian. Disney Gallery: The Mandalorian, an eight-episode documentary series, starts streaming on May the 4th, only on #DisneyPlus. pic.twitter.com/tHmFGmc2AA

UPDATE: Disney has shared more details regarding the new program on starwars.com...

In Disney Gallery: The Mandalorian, executive producer Jon Favreau invites the cast and crew to share an unprecedented look at the making of the series that quickly became a pop culture phenomenon after premiering last November. Each chapter explores a different facet of the first live-action Star Wars television show through interviews, never-before-seen footage, and roundtable conversations hosted by Favreau himself.

Jon Favreau, renowned director and creator of The Mandalorian, had this to say about what the series will offer to fans of the show:

“Disney Gallery: The Mandalorian is an opportunity for fans of the show to take a look inside and get to see a different perspective, and perhaps a greater understanding, of how The Mandalorian came together and some of the incredibly talented contributors throughout Season One. We had a great experience making the show and we’re looking forward to sharing it with you.”

While it's clear that The Mandalorian will be the centerpiece of this season, there are a variety of topics that the series will explore, including "the filmmaking process, the legacy of George Lucas’s Star Wars, how the cast brought the characters to life...plus the creative influences, the iconic score, and connections to Star Wars characters and props from across the galaxy."

Another surprising tidbit from this piece is that the series finale of The Clone Wars will move from the show's normal Friday release to a Monday, May 4th release, in order to be in conjunction with both Star Wars Day and the first episode of Disney Gallery: The Mandalorian.

Considering the current state of the world due to COVID-19 and everyone quarantining at home, this news should excite many Star Wars fans. With the technological and visual achievements of both The Jungle Book and The Lion King, as well as what was seen in the ILM behind-the-scenes video, Jon Favreau clearly has a knack for progressing production technologies and inventing new ways to tell stories on screen. So getting the chance to go behind the curtain and see how the teams over at Lucasfilm and ILM put the pieces together is truly a special opportunity. Some of the best parts about the prequel films were the "making of" documentaries that came with the home media. And seeing as the title is "Disney Gallery:" The Mandalorian, it's very likely that this will be just the first season in a new series on Disney+, taking fans beyond the screen for many of their original shows or films released on the streaming platform.

Disney and Lucasfilm are also clearly establishing a connection between this series, Star Wars Day (or May the Fourth), and the Season 7 finale of Star Wars: The Clone Wars. Now that both the first episode of Disney Gallery: The Mandalorian and the final episode of The Clone Wars are releasing on the same day, fans are in for a packed and emotional May the Fourth. The possibility of Star Wars Celebration in Anaheim actually happening this year continues to decrease with concerns about the coronavirus and the public's health. So this move by Disney to gift the Star Wars community with more content on a day where everyone celebrates the franchise anyway is a brilliant decision that fans will eagerly wait for. Even though it's still about half a month away, there's no doubt that the Force will be with everyone on May 4th as one chapter closes and another one begins.