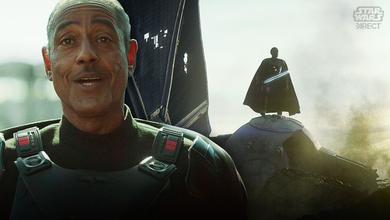 The world was first introduced to the mysterious Moff Gideon in the back end of the penultimate episode of The Mandalorian's first season. We learned about him just through the way he arrived in style in his nifty TIE Fighter, his behavior as he willingly terminated his allies to corner his enemies, his knowledge of our heroes' names and pasts, and his majestic attire topped off with a classy cape. For reasons still unknown, Gideon will stop at nothing to capture Baby Yoda. The threat he poses to Din Djarin and the Child increased drastically when he popped out of his crashed TIE fighter with the darksaber in hand. This shocking moment to end the season left us with many questions and some grim implications. We still know little about Moff Gideon, but actor Giancarlo Esposito has offered some thoughts on the nature of the villain.

In an interview with Variety discussing another popular series in Better Call Saul, Giancarlo Esposito touched on the way Moff Gideon operates:

Moff is very different from Gus Fring. He wields his own darksaber. He does his own dirty work and is certainly willing to. He’s much more volatile, he’s much more of the warrior and that could tell us some things about him next season.

We really only had one episode with the character, but Moff Gideon made a statement in his brief time on Navaro. The most interesting part of Esposito's comments is the claim that the character does his own dirty work. The Mando's encounter with Baby Yoda only happened because Gideon instructed The Client to hire bounty hunters to capture the little being, clearly hoping to remain in the shadows. His underling's failure to obtain the asset evidently forced the Moff to step in and finish the job himself. Unlike previous Moffs in Star Wars, Gideon actively participated in fighting the heroes, engaging in a shootout and attacking them head-on in his fancy TIE fighter.

The character's possesion of the darksaber speaks volumes. When we last saw the weapon, it was in the hands of Bo-Katan Kryze, who was leading a Mandalorian rebellion against the Empire. If the sword is now in the hands of an Imperial, one described as a warrior, one could guess that Gideon won the weapon in combat. Now that The Child has slipped through his fingers yet again, we can expect Gideon to have a very active role in the upcoming season of The Mandalorian. And if the implications of his ownership of the darksaber are anything to go by, he's going to prove to be a more than capable foe for Din Djarin and Baby Yoda. For our new favorite tag-team, challenging times lie ahead.