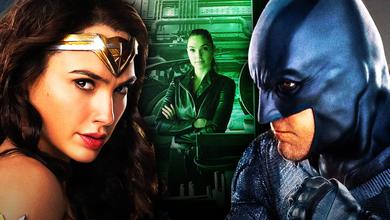 There has been quite a bit of news floating around the internet as of late, regarding the upcoming "Snyder Cut" of the DC superhero team-up film, Justice League.

Most fans know the story by now: Zack Snyder was deep into directing Justice League for a 2017 release when he was forced to exit the project due to a personal tragedy. Joss Whedon took over the production and, working with Warner Bros, ended up reshooting the bulk of the movie.

The end result was not exactly what fans were expecting to say the least.

Now, Zack Snyder has been permitted to go back in and release his original version of JL using the footage that was initially shot in 2016, along with some newly filmed elements.

Fabian Wagner, who served as cinematographer during Zack Snyder's time on Justice League has been sharing behind the scenes photos of the 2016 shoot on his Instagram account. He has shared the following image of Wonder Woman actress, Gal Gadot standing in front of the Batmobile:

Gal and the Batmobile just before a take. I always use my beloved Fuji X100F to take reference pictures (we were shooting 35mm so I would grade my ref pics straight away and send them to our dailies colourist)

It's certainly an eye-catching shot that has been posted by Wagner. It's clear that this isn't a shot from the film but more of a peek behind the scenes.

It also appears to be shot in some part of Bruce Wayne's famous underground headquarters, the Batcave. Alternatively, it's possible that this scene is meant to take place in the hanger for Bruce's large "Flying Fox" aircraft, that audiences saw in the 2017 theatrical cut of Justice League.

Zack Snyder's Justice League aka, the "Snyder Cut" is due to release on HBO Max in early 2021.