Unbeknown to the fandom, Zack Snyder had been teasing the introduction of Martian Manhunter since his first DCEU flick. Harry Lennix's General Swanwick led the defense against the alien threats of Man of Steel and Batman v Superman: Dawn of Justice before he was ultimately revealed to be Martian Manhunter in Zack Snyder's Justice League.

Having acted in the shadows throughout most of Snyder's DCEU tenure, the final moments of his Justice League cut saw Martian Manhunter reveal himself to Ben Affleck's Bruce Wayne, setting himself up to join the team and assist in the fight against Darkseid in the canceled sequel.

While Snyder clearly had grand plans for Martian Manhunter in both the second and third installments of his Justice League saga, his departure from DC brought those to an abrupt end. So, this left his short cameo as the one-and-only look at the hero's DCEU design, until now.

Iron Studios debuted an official figure of Martian Manhunter from Zack Snyder's Justice League at CCXP 2022 after initially revealing it at SDCC of the same year. 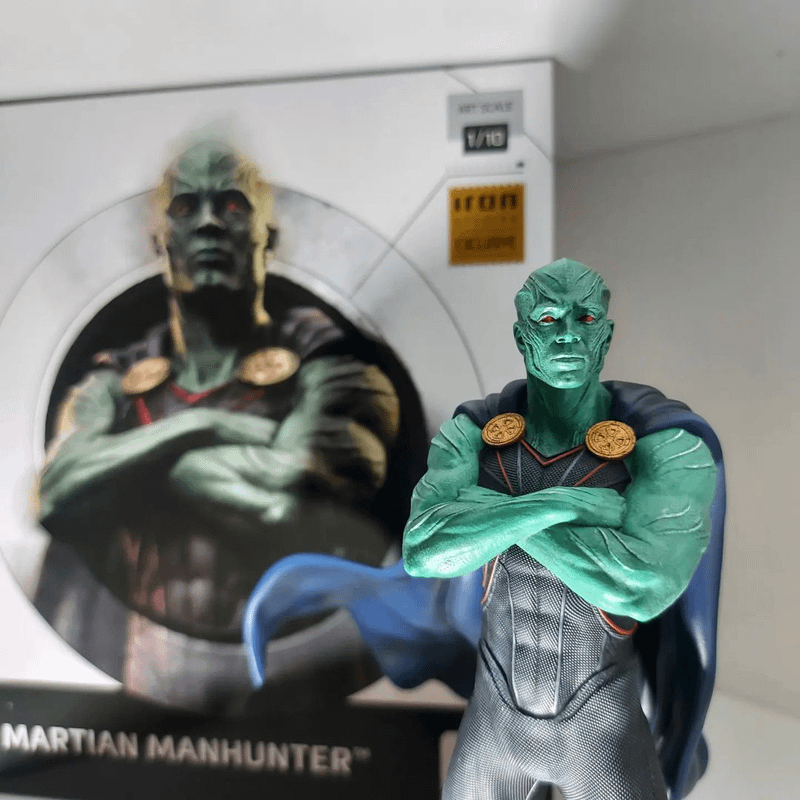 Harry Lennix only appeared as the Justice League veteran for a few short minutes at the end of the Snyder Cut to tease the sequel's Darkseid encounter.

Iron Studios' highly-detailed figure offers a close-up look at the costume and face design of Martian Manhunter without the sunset lighting of his Snyder Cut scene.

Martian Manhunter's base for the figure appears to be a slab of Bruce Wayne's patio tiling from which he meets the Dark Knight in the movie.

Just as happened in the Zack Snyder's Justice League scene, his navy cape can be seen blowing in the wind, allowing it to be viewed in all its glory.

The figure was developed on a 1/10 scale and remains exclusive to 2022's Brazilian CCXP convention.

The Missed Opportunity Of Martian Manhunter

Thanks to the famous Justice League animated series of the early 2000s, Martian Manhunter is known by most as a core member of DC's premier superhero team. So, much like Green Lantern, many were shocked when he was absent from the 2017 superhero team-up, or at least the Joss Whedon cut that initially released.

Nonetheless, Zack Snyder clearly recognized the significant importance of the character after building up him in the background across two films before a dramatic reveal in his Justice League flick. This arguably came to be the most anticipated moment for fans to finally see when the Snyder Cut came to fruition.

Had the Snyderverse continued past the Justice League calamity, Martian Manhunter likely would have had a pivotal part to play in guiding the team into battle against Darkseid. Perhaps this slate even could have seen Harry Lennix's martian hero receive his own solo outing - the first-ever for the character.

The opportunities for Lennix's Martian Manhunter into the DCEU were truly endless, but unfortunately were quickly left behind when Snyder's franchise plans were abandoned.

Going forward, whenever the martian hero comes into play under James Gunn's new DCU reboot, there may well be a new actor in the role. However, as the DC Studios CEO has confirmed that he will not completely abandon every element of the SnyderVerse, Lennix's return may not be off the table.