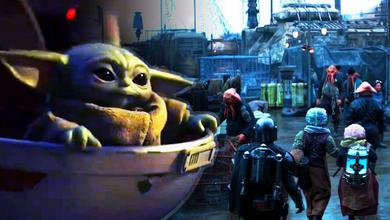 After a long wait, Star Wars fans were rewarded for their patience when the trailer for The Mandalorian Season 2 released. The trailer had plenty of new footage from the upcoming season, with hidden details such as a possible appearance of Boba Fett's jetpack sneaking in.

In addition to the trailer, merchandise provided a new look at Din Djarin's Beskar armor in all its glory. Season 2 will also retain the chapter-like structure of the first season, continuing with 'Chapter 9' for the upcoming premiere.

Whilst Disney+ is gearing up for the next season, the previous season of The Mandalorian has received Emmy buzz through several nominations, including for Best Drama Series. The show ended up taking home a few awards in the end, including well-deserved Emmys for Stunt Coordination and Outstanding Music Composition for a Series (Original Dramatic Score).

A new TV spot now gives a bit more footage to tide fans over in the meantime...

The brief footage provides a quick close-up glimpse of Baby Yoda following Din Djarin along in his pod:

While this TV spot does not reveal too much, it does reinforce that The Mandalorian will center around Din Djarin and The Child searching for his species. With so many additional characters joining the series, including Ahsoka Tano and Boba Fett, some may have been worried that the show would become too crowded and lose focus. It appears that Baby Yoda will still very much be the focus of the series, as the pair chart a course across the galaxy to find where the Child came from.

This footage also conveys the continued nature of the series; Baby Yoda doesn't look like he's aged a day (or however aging works in their species). Lucasfilm seems to be using the same animatronic this time round, likely to cut costs and because they don't really need to. This reinforces that the show will pick up soon after where the previous season left off, propelling fans straight back into the action.

Fans can see even more of Baby Yoda when the second season of The Mandalorian releases on October 30, 2020.