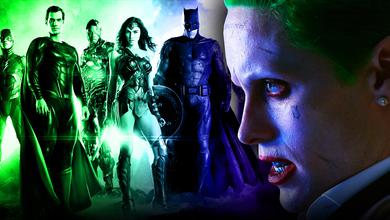 Ever since Zack Snyder's Justice League was announced for a 2021 release on HBO Max, there's been a steady flow of information from the director but just as much confusion as well. After months of speculation, fans now know the Snyder Cut is set for a March 18 release and will exist in a singular 4-hour format, including Jared Leto's Joker from 2016's Suicide Squad.

However, a recent tweet from Snyder showing a blurry image of Jared Leto's Joker, followed by newly released images of the character, led to a new barrage of questions, particularly since this Joker looks different from the character moviegoers saw in David Ayer's 2016 film.

So why such a drastic difference for Leto's Joker?

ZACK SNYDER'S JOKER IS UP FOR INTERPRETATION

In an interview with Vanity Fair, Snyder said:

The new photos of the Joker for Zack Snyder's Justice League show Leto sans-tattoos sporting long, dark hair, a hospital gown and mask, and a bulletproof vest covered in law enforcement badges — a far cry from the last time we saw Leto as the Joker in the Suicide Squad with his short, bright green hair and facial tattoos.

But from these comments, it doesn't seem like Snyder is concerned about connective storytelling.

CONTINUITY IS NOT THE GOAL

Snyder's comment about water under the bridge says just as much about his relationship with Warner Bros. than it does the Joker. What came before in the DCEU is irrelevant to the story he's setting out to tell.

In a way, he and the studios are on the same page in treating this highly-anticipated cut as a true standalone project that's more about his vision for the characters and their story than actual continuity.

Zack Snyder's Justice League is set to debut on HBO Max on March 18.