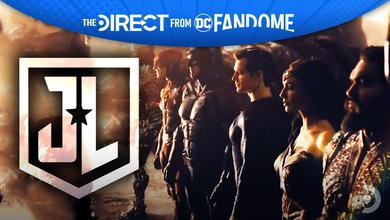 DC FanDome Part 2 is now underway, bringing interesting tidbits and details from upcoming DC films and television series. After revealing a plethora of information at the previous DC FanDome panel, it was unexpected that Zack Snyder's Justice League would receive even more news from the second event.

The first DC FanDome panel for the Snyder Cut brought many new details, including the confirmation that the project would be released as a 4-part miniseries. The panel also dropped the first official trailer for the film, after getting small glimpses from Zack Snyder in the lead up to the reveal.

What was not confirmed at the panel was the miniseries' official title, which Snyder is supposedly still negotiating behind the scenes. Snyder also stated that the series would feature over 2000 visual effects shots.

Junkie XL is replacing previous Justice League composer Danny Elfman, and he has unveiled an all-new theme for the mini-series...

In a new video from the second DC FanDome event, Junkie XL, who is scoring Zack Snyder's Justice League, released a snippet of the new theme for the upcoming miniseries:

Before previewing the brief audio clip, Junkie XL described this section of the theme as being part of an "action bit". This description is quite apt, given how heroic and bombastic the theme is.

While using similar horns and strings to the theatrical Justice League theme, Junkie XL's rendition varies greatly in regards to its tone. Whereas the Elfman theme used frequent choirs and almost staccato melodies, Junkie XL's take swells much more and features much smoother violins. The theme almost echoes themes of the past, particularly animated themes like those of Batman: The Animated Series and the animated Justice League series.

There are many different places where this new theme could arrive in the film, though it is likely that this will play some time in the final battle. The theme almost sounds like it is a grand culmination, so it is likely that the theme will progress throughout the miniseries to get to this point.

Zack Snyder's Justice League will be released on HBO Max in 2021.