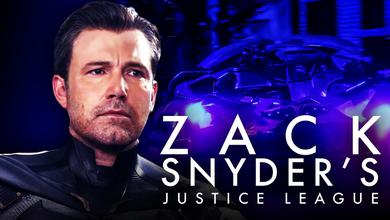 The Snyder Cut of Justice League is inching closer to making its official debut on HBO Max, which will come in just over a month. Hoping to make a huge splash in the streaming world by getting a one-day head start on Marvel Studios' The Falcon and the Winter Soldier, director Zack Snyder is aiming to put a tumultuous year for this film behind him and show his true vision to the world.

Snyder has been diligently teasing what's coming in this movie for most of the past year, sharing various images from behind the scenes and discussing new characters and storylines that will give more depth to this story within the DC Extended Universe. Thanks to the movie's reported four-hour runtime, there will be ample opportunity to throw almost everything but the kitchen sink into this new version of the movie (Of course, unless Ben Affleck's Batman throws a sink again the way he did in Batman v Superman).

Even with the extra fluff, the Snyder Cut will still center around DC Comics' core team of heroes. This continues to be shown with Snyder's latest tease.

Zack Snyder recently took to Vero to share a new behind-the-scenes image from the Snyder Cut of Justice League. The black & white image shows Affleck's Bruce Wayne and Jeremy Irons' Alfred having a discussion alongside the Batmobile.

The image also includes the caption "Excited also for you all to see this version. #justiceisgray."

The content of the image itself doesn't give away too much groundbreaking information considering how heavily involved Ben Affleck's Bruce Wayne is in the plot of this adventure. With such a long runtime, Alfred and the Batmobile are guaranteed to play an important role alongside the Caped Crusader, no matter how much the plot of this movie varies from the original 2017 cut.

The interesting piece to notice in this picture is the hashtag, which could potentially indicate some black & white or gray footage coming in the Snyder Cut. Zack Snyder's second trailer for the movie used this color scheme exclusively, and he has even teased that his ideal version of the movie is in black & white.

This color scheme will certainly be something to take note of when the film releases, along with the hordes of adjustments Snyder made to make his vision a reality. The Snyder Cut of Justice League will debut on HBO Max on March 18, 2021.