Star Wars will embrace a new avenue of storytelling in the form of several live-action Disney+ series. The Mandalorian successfully launched the new branch of Star Wars content, with a plethora of Emmy nominations and a much-anticipated season 2 . One of the exciting Star Wars projects that will join The Mandalorian on Disney+ is Cassian Andor .

Plenty remains unknown about Cassian Andor, but previous rumors could shed some light on the series. The show will reportedly include characters from 2016's Rogue One while also introducing new ones in the mix. On top of that, Grand Moff Tarkin will also be involved in some fashion , and it has been reported that the series will have a tone similar to The Empire Strikes Back .

At this point, the series is still poised to debut sometime next year , but the production delays of the show could ultimately derail those plans. And now, a new update has emerged straight from the lead star of the series. 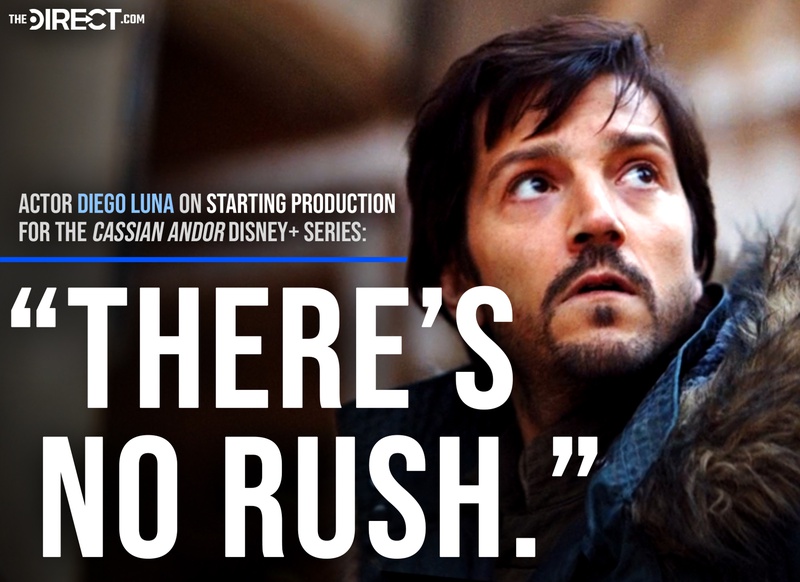 While speaking with the Guardian , Cassian Andor actor Diego Luna shared how the pandemic has changed his perspective when it comes to the production delays that the show has experienced. Luna admitted that the "pandemic brought to my attention that there are priorities" while also pointing out that they "have to be wise on when and how to go back:"

“Shooting is starting around the world, so slowly we’re going back, but there’s no rush. To me, what this pandemic brought to my attention is that there [are] priorities. We have to be cautious and we have to be wise on when and how to go back. And the how is the most important, because if we go back to be who we were, we’ve wasted our opportunity, we wasted a major opportunity of rethinking and reinventing much of the stuff we believed was crucial and essential that clearly is not.”

There is no doubt that the ongoing health crisis has changed the perception of many celebrities, and it seems that Luna is among those who reflected on its impact. Luna's comments indicate that the health of everyone is his utmost priority while also hinting that a plan is currently in the works for the show to get back to filming. It was previously rumored that production for both Obi-Wan Kenobi and Cassian Andor will overlap, but the continued delays and extensive planning of health protocols could come into play in terms of mapping out a viable timeline.

The pandemic had a massive effect on the entertainment industry, and it's more than just shifting release dates of movies and numerous production delays. Employees are getting laid off , and a wide array of movie theaters are being closed down. That said, Luna's strong sentiments about resuming production demonstrate his concerns with his fellow workers, and it is likely that the actor is involved when it comes to finding out the best time and way for work to resume.

The leaked synopsis of Cassian Andor mentioned that the titular character will look to restore hope to the galaxy by going on daring missions. Based on Luna's recent remarks, it seems that the actor is following the footsteps of his Star Wars persona in terms of providing a silver lining to those who are direly affected amid the pandemic.