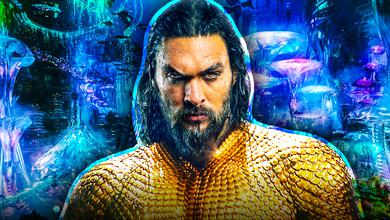 News about Warner Bros. upcoming slate of films from The Suicide Squad to The Batman has been steady as filming begins and release dates approach.

But when it comes to the sequel film for 2018's Aquaman starring Jason Momoa, news and announcements have been few and far between.

This is surprising considering Aquaman still holds the title of the highest-grossing DCEU movie, and since Shazam! Fury of the Gods received its title months ago despite having a later release date.

But now, it seems that fans are getting answers and a confirmed title.

On Instagram, returning director James Wan shared the sequel's official title — Aquaman and the Lost Kingdom — which is slated to release on December 16, 2022.

Wan shared the following title from a production meeting screen, coupled with the caption: "The tide is rising."

While very little is known about the film's story, Jason Momoa collaborated on the film's story treatment with James Wan and returning writer David Leslie Johnson-McGoldrick.

In addition, the Aquaman comic — Aquaman: Kingdom Lost — bears a strong similarity to Wan's newly revealed title and involves Aquaman's estranged wife Mera being cursed to live on land. But an attempt to break the curse results in the destruction of Atlantis.

This film is an interesting position in comparison to other Warner Bros. DC films which could be why fans are just now learning the title.

After all, Momoa's Arthur Curry was part of Zack Snyder's Justice League and the studio's original plans for the DCEU which have since been scrapped. And while this is also true of The Flash, that particular film is relying on a multiversal element that includes Michael Keaton's Batman.

Aquaman doesn't have that luxury.

In addition, James Wan's planned spin-off film The Trench, which likely played a part in the director's original vision for the future of Arthur Curry and his world, was recently canceled by the studio.

But now that there's a title and filming is expected to begin this summer, the project appears to have found its determined course.

And if the comics are contributing the story along with input from Momoa, Aquaman and the Lost Kingdom will no doubt have fans' attention.

Aquaman and the Lost Kingdom is set to release on December 16, 2022.