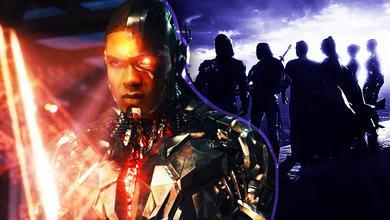 Most DC fans know the story by now: Zack Snyder was a good ways into production on his Justice League before a tragedy occurred in Snyder's personal life and resulted in Joss Whedon taking over directing duties on the film.

The finished product was, by all accounts, dramatically different from what Zack Snyder had originally envisioned for the DC film and wasn't exactly well-received by the fanbase.

Now, Snyder and Warner Bros are hard at work assembling the "Snyder Cut" of Justice League to deliver to fans the film they've been wanting to see for almost three years.

Ray Fisher, who plays Victor Stone/Cyborg in the film ,has also had his own troubles with the Whedon production, having made allegations of misconduct from the director that occurred when they were shooting.

Ray Fisher has taken to Twitter to share what looks to be a new still from the Zack Snyder cut of Justice League. He's captioned the post: "Remember. #UsUnited"

It's a bit unclear as to what Fisher means by the caption "Remember #UsUnited." It could have something to do with his much publicized battles with Warner Bros. over his claims of mistreatment.

Whatever the case may be, the screencap in question shows Ezra Miller's Flash standing next to Cyborg as he projects some sort of hologram from the node in his cybernetic forehead.