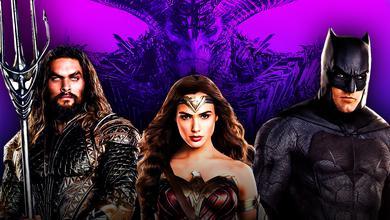 The original 2017 cut of Justice League has been heavily criticized by DC fans over the years since its release for a number of things — notably the storyline, misplaced humor, and poor CGI quality.

As most are aware, the production of the film was messy, to say the least. What was originally planned as a two-part movie was transformed into one. Zack Snyder was forced to depart as director during post-production and was replaced by The Avengers' Joss Whedon, and multiple hours of footage was scrapped.

Naturally with a director swap during post-production, the film had some serious editing and CGI issues. Upon release, the film quickly spawned a series of viral memes for its various CGI mishaps including the famous attempt to remove Henry Cavill's mustache which he donned during the reshoots under Whedon.

However, another notable area in which the film's post-production was considered to be greatly lacking, was in the design of the main antagonist, Steppenwolf. The villain was designed almost entirely through CGI and all around the appearance was seen as bland and lackluster by many.

After a long social media campaign, Snyder has finally been given the chance to return to his film as his cut finally got the production green light last year. One of the director's first priorities upon getting back into the editing studio, was to update the look of Steppenwolf and his armor, a process which has now been showcased in a series of concept images.

Jerad Marantz, designer on Zack Snyder's Justice League, has shared new looks at the concept art process for Steppenwolf's upgraded armor design in the re-release on his Instagram.

The designer commented on the process of creating the new and improved armor design saying it "took quite a bit of time to figure out how to do the armor." Marantz went on to provide a closer look at the new armor design.

Steppenwolf's improved armor showcases a significant difference from the original 2017 look which was criticized by many fans for its bland aesthetic.

A NIGHT AND DAY DIFFERENCE

It's clear to say, the new look for Steppenwolf has been much better received than the original, marking a substantial upgrade in design. The new armor shown on the villain appears to sport significantly more detail than the previous, generally creating a much more intimidating look for the character.

As has previously been discussed, Steppenwolf won't be the only villain of the film as the four-hour epic is said to feature appearances from Darkseid, Jared Leto's Joker, Lex Luther, and Granny Goodness.

While the film will feature a multitude of villains, Steppenwolf will naturally still serve as the primary antagonist of the film, as the rest were mainly included as set-up from a future that is unlikely ever to be seen.