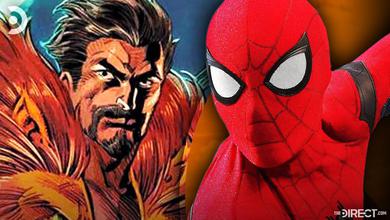 Kraven the Hunter is one of many Spider-Man related films being developed at Sony, with a script being written by Richard Wenk. Wenk has stated that the film will draw inspiration from the popular comic book storyline Kraven's Last Hunt, and will therefore include Spider-Man in some capacity. Antoine Fuqua, director of The Equalizer film series, was previously being sought after to lead the project.

Rumors also circulated about the character showing up in the Marvel Cinematic Universe, with Marvel Studios supposedly looking for a "Joel Kinnaman-type" to play Kraven. It is unknown whether this version of the character will be the same one that appears in the Kraven the Hunter film, or if the character will be recast to keep the universes separate. Michael Keaton's brief appearance at the end of the Morbius trailer could suggest that crossover is a possibility, although it is unknown whether he is reprising his role as the Vulture

A new director is now seemingly being eyed by the studio to helm the Kraven the Hunter project...

In an exclusive report from Deadline, Triple Frontier director J.C. Chandor is reportedly being eyed to direct the Kraven the Hunter film at Sony.

Like other Spider-Man related Sony projects like Venom and Morbius, Matt Tolmach and Avi Arad will be producing the film.

From a previous interest in Antoine Fuqua to now eyeing J.C. Chandor, it is clear that Sony Pictures is looking for a director that can craft a compelling character whilst being able to pull off impressive and tense action setpieces.

J.C. Chandor is best known for his work on the Netflix film Triple Frontier, a film that uses its star-studded cast to keep the film grounded and character-driven. With Kraven headlining his own movie, it is crucial that audiences are able to get on board with the character.

Triple Frontier is also an action heavy, militaristic film, which will be sure to inform a lot of the action sequences featured in the Kraven the Hunter film. Triple Frontier demonstrates that Chandor is capable of portraying scale in an engaging and exciting way, so he should fit right at home directing big blockbuster superhero action.

Ultimately, this directorial choice shows that Sony is really putting all their stock into ensuring that their upcoming Spidey flicks are the best that they can be. By also locking in Olivia Wilde to direct Spider-Woman, Sony may have an upcoming lineup that rivals even Marvel Studios' efforts.

Kraven the Hunter has yet to receive a release date, but more news about the film will surely be coming soon.