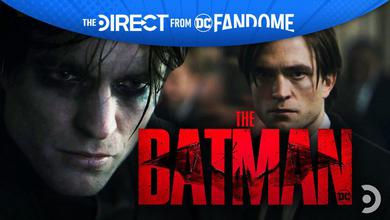 Combining the A-List forces of director Matt Reeves and actor Robert Pattinson has laid the groundwork for an extremely gritty take on the Batman.

Speculation on this movie's plot has run wild, with a substantial ensemble from the Dark Knight's rogues gallery set to play a role.

Aside from a brief official look at Pattinson suited up, most details have been kept close to the vest.

The Batman has its first official images.

Taking to the Warner Bros. Pictures twitter, @wbpictures tweeted out three official snapshots from the upcoming reboot. Within those photos we see Pattinson as Bruce Wayne, the Batcave, and a brooding shot of a cowl-less Batman.

If you're excited about these, wait till you see what we have for you in #TheBatman panel at #DCFanDome starting at 5:30 PST. pic.twitter.com/hzSm4zV7i0

How amazing does Bob Pattinson look as Bruce Wayne?

These images match the ones that were leaked earlier, but getting official confirmation makes it that much sweeter. Despite being a handsome lad, most discussion around Pattinson after he was cast revolved solely around his jawline. Above all else, fans wanted to make sure the former Twilight star's chin would look good in a cowl.

These still images focus more on the whole face of Bruce Wayne rather than his vigilantic alias. For anyone who was hesitant about Pattinson's ability to tackle both sides of the caped crusader, these snapshots should put some of those fears to rest.

Pattinson's visage clearly shows there's more behind the face of Wayne Enterprises. The third image shows that in spades, as an unmasked Batman complete with eye black sports shaggy hair and pained eyes.

It was reported earlier that this Batman would be in his sophomore season, and Pattinson's young look and tormented expressions clearly show that.

The Batman panel at DC FanDome is scheduled for 8:30 PM EST.