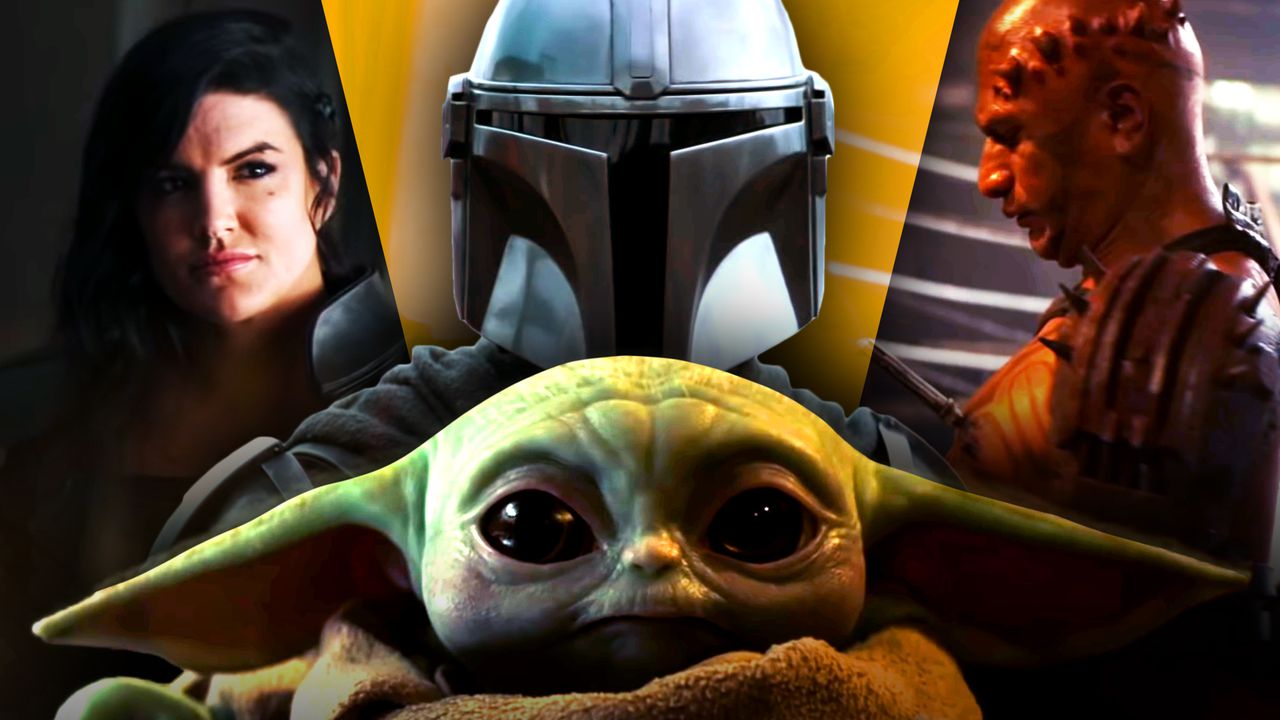 It’s happening. The Mandalorian season 2 is coming in October! It’s been a long ten month wait, but the Emmy award-winning Star Wars series looks set to top its first season with a fresh batch episodes full of new characters, planets, and plenty of Baby Yoda.

The Mandalorian remains one of the biggest flagship successes on Disney+, and eight new episodes will be hitting the streaming service this year. But, it’s been a while, so The Direct is here to bring you up to speed on all the latest The Mandalorian season two news, as well as everything you may have forgotten from season one.

For anyone who hasn’t seen the first season of The Mandalorian, here’s what you need to know. On the Star Wars timeline, The Mandalorian takes place after Episode VI: Return of the Jedi and before Episode VII: The Force Awakens, so basically post-Empire but pre-First Order.

The lead character is, naturally, the Mandalorian, aka Din Djarin, who travels the galaxy kicking butt and taking bounties so that he can upgrade his armor to the maximum level. That is, until he meets a bounty he can’t deliver: The Child. While Mando and the Child bond, the entire galaxy comes after them, including big bad Moff Gideon, who is keeping alive the remnants of the Empire.

So, where did everyone end up at the end of season one?

The Mandalorian and The Child escaped Nevarro and the clutches of the empire after the heroic sacrifice of IG-11. Before this, the Mandalorian Armorer told Din Djarin that The Child was a foundling, and by the creed, it is in his duty of care. He decides to seek out Baby Yoda’s origins and they take off in the Razor Crest.

Greef Karga and Cara Dune choose to remain on Nevarro to make sure the remaining Stormtroopers have been dealt with. Greef assures the Mandalorian that he is welcome back to the bounty hunters guild, and also tries to recruit Cara Dune.

Moff Gideon was last seen crashing and burning in his TIE fighter after a battle with the Mandalorian. However, it seems he may possess some force powers of his own as he climbs from the wreckage wielding a black lightsaber, otherwise known as the Darksaber.

So, what does all this mean for the next season?

The Mandalorian’s second season will premiere on Disney+ on October 30, with new episodes released weekly. If past schedules are to be believed, episodes should drop around midnight PST or 3 am EST, but check back closer to the premiere for Disney’s full episode schedule and release times.

There will be eight episodes in season two and the titles will continue the chapter naming convention from season one, although the full titles haven't been revealed yet. So far, a new logo, poster, and images for season 2 have been released, and you can find The Direct's full breakdown of the trailer here.

Some new faces will be joining the crew this season on The Mandalorian. First up, as seen in the trailer, is Sasha Banks’ mysterious hooded character. At this point in time there’s no confirmation on who this is, but popular theories point to her being a Jedi Knight in hiding, or maybe even Star Wars Rebels character Sabine Wren.

Other popular Star Wars Rebels faces are also rumored to be appearing in The Mandalorian season 2. The most hyped is definitely Ahsoka Tano, played by Rosario Dawson. Ahsoka is another Jedi in hiding during this time period of the Star Wars timeline and she might just be the perfect mentor to a young Baby Yoda.

Katee Sackhoff is another new cast member who is said to be reprising her Rebels character Bo-Katan Kryze, a fellow Mandalorian. Ahsoka’s long time companion Captain Rex, one of the last Clone Troopers, may also be appearing. These characters definitely add to the theory that Star Wars is working to build a live action shared universe, and bringing popular animated characters to the screen is the first step.

Speaking of popular characters, the original Mandalorian is said to be coming back this season. Temuera Morrison, who originally portrayed Jango Fett, is said to be returning to the Star Wars universe in the role of Boba Fett. Whether this means the character of Boba is returning or be it someone wearing his iconic armor is undetermined. But, as the original face of the clones, Morrison has a number of character options open to him, including Captain Rex or any members of the Bad Batch.

Adding to the mystery of the season is Timothy Olyphant’s secret character. Initial reports pointed to Olyphant playing Cobb Vanth, a sheriff of a Tattooine-based town. What complicates things is that in Star Wars lore, Vanth is also the new owner of Boba Fett’s recovered armor. So whether it will be Morrison or Olyphant wearing the helmet in season two is a big question that needs to be answered. But, it sounds like Boba Fett will be appearing one way or another.

Katee Sackhoff said she'd like to explore Bo-Katan's leadership role and whether she thinks she's the right person to lead in 'The Mandalorian.'
A new behind-the-scenes featurette for 'The Mandalorian' was officially revealed.
Two new pieces of concept art from 'The Mandalorian' showcase Idris Elba and the late Chadwick Boseman as Star Wars characters.
See All The Mandalorian News, Rumors and Leaks on DirectFact

There have also been a few changes behind the camera coming into The Mandalorian season 2. Now that the majority of directors behind season one have moved on to Star Wars projects of their own (such as Deborah Chow directing the Obi-Wan Kenobi series and Taika Waititi getting his own Star Wars movie), many of the coveted directing slots have been filled by new faces.

This season, The Mandalorian creator, producer, and writer, Jon Favreau, and cast member Carl Weathers (Greef Karga), will be stepping behind the camera for an episode. Returning season one directors Dave Filoni, Rick Famuyiwa, and Bryce Dallas Howard are also all back for an episode each, which leaves space for two newcomers. Taking the chairs will be Alita Battle Angel director Robert Rodriguez and Ant-Man director Peyton Reed. Behind the scenes insight has shown that the directors of The Mandalorian all work closely together on the entire season, so some new voices are sure to shake things up for season 2.

The Mandalorian was lucky enough to have wrapped production earlier this year, thus avoiding the worldwide production shutdown due to COVID-19. The show's heavy VFX schedule managed to continue with work from home arrangements, meaning the release date for season two has remained on track.

Plot details for The Mandalorian are thin, but here’s what we know. Continuing from last season, the Mandalorian is searching the galaxy for the mysterious Jedi order and hopefully finding a home for his young charge, The Child. Lead actor Pedro Pascal stated that season two starts ‘very directly’ after the events of season one, so there won't be any significant time jumps.

In pursuit of the duo is Moff Gideon who, as the original patron behind The Child’s bounty, wants what he paid for. Why Gideon is after Baby Yoda is a mystery so far, but actor Giancarlo Esposito has teased that we’ll learn a lot more about his character this season. Something else to expect in season 2 is a show-down between Gideon and the Mandalorian. Gideon made it clear he knew the Mandalorian personally at the end of last season, so it’s likely the two have a backstory that will be revealed in upcoming episodes.

Shots from the trailer include a variety of new planets that the Razor Crest will be visiting, so it looks like the Mandalorian will be searching far and wide for clues about the Child’s origins. One such planet is Tattooine, which we all know is the home of a few famous Jedi. Regardless of whether Mando picks up any new information about the Jedi here, it’s likely he’ll run into the returned Boba Fett on Tattooine.

Now that Game of Thrones is over, something needs to step in to become the new water-cooler talk. And even with Jon Favreau publicly comparing The Mandalorian to Game of Thrones, it’s time to break out the fan theories. With such a long history and a large galaxy of possibilities, there are infinite, exciting crossover opportunities that The Mandalorian could deliver.

Some of the top rumors going around the internet are centered around the true nature of Moff Gideon and his darksaber. It’s been suspected for some time that Gideon has been seeking the Child because of his own force-sensitive nature, or maybe lack thereof. There’s also plenty of explaining to do about the Darksaber and how exactly Gideon acquired it from its last owner, Bo-Katan.

X-Wing sightings in the recent trailer have also led to speculation that Mando could come in contact with the Rebellion. It’s clear that, despite the Emperor having been defeated, the Empire is anything but when The Mandalorian takes place. With Gideon and others continuing to lead Imperial forces, its only natural that the Rebel side comes into play as well. Possibly Mando and the Child will have an impact on the makings of the New Republic, but it’s also likely that the rebels could serve as a crossover point for the other new Star Wars Rebels character into the world of The Mandalorian.

Speaking of the Star Wars Rebels characters, how exactly will they play into the next season? So far, Disney is playing its cards close to the chest and not discussing any of the new cast appearances. Rumors go so far as to suggest that characters like Ahoksa will be getting their own spin-off shows. But, whether The Mandalorian will serve as a jumping off point for an entirely live-action Rebels cast is yet to be seen. However, with the timelines matching up, there’s a good chance that some familiar faces from the Star Wars franchise will be appearing in season two.

To read more about season two, The Direct recently broke down some of our top predictions for The Mandalorian. Keep checking back each week after October 30 for our coverage of the new episodes.