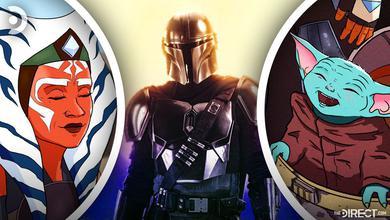 If some fans were skeptical about Star Wars' future on Disney+, it's safe to say many of their worries were put at ease when The Mandalorian premiered this past November. The show opened up a new world of storytelling, combining vast worlds, an unfamiliar time period, and unique characters. Flash-forward to now, where fans are eagerly calling for the first look at Season 2, dropping this October.

The lack of footage from the upcoming installment hasn't stopped numerous outlets, including The Direct, from speculating and offering predictions that continue the story of Din Djarin and the Child. Those theories, to no surprise, have received an added boost from the surplus of rumors and teases regarding the second season.

A month ago, one of The Direct's writers/content creators, Tom Drew, used his artistic abilities to bring to life a variety of Marvel Cinematic Universe Phase 4 predictions through illustration. We've decided to use this same concept and apply it to The Mandalorian Season 2 predictions. The list below was inspired by some of our ideas from previous articles, with a bit of imagination scattered throughout.

Ahsoka and The Child Link Through the Force 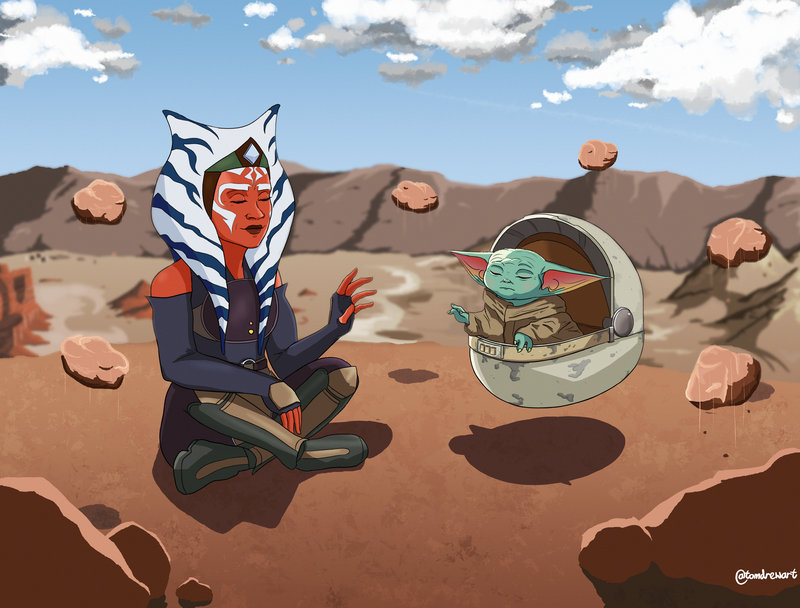 Just when Ahsoka Tano made her triumphant return alongside the final season of Star Wars: The Clone Wars this year, shocking news released stating the character would make a guest appearance in The Mandalorian Season 2, with Rosario Dawson starring. This report sent shock waves across the fandom, sparking endless speculation of what Ahsoka's role could be in both the space-western and future Disney+ shows.

Our theories have led us to think of many different scenarios. However, if the former Jedi is indeed making a small cameo in the next phase of Mando's perilous adventures, it's hard to imagine there won't be some interaction between Ahsoka and the Child, a.k.a. Baby Yoda.

Will the two be connected in the Force? Is Ahsoka aware of Yoda’s species, or the Child’s innate power? Those questions, and others like it, are at the heart of this first illustration.

Time and time again, The Mandalorian demonstrated Baby Yoda’s natural ability to wield the mystical energy field. This drawing is just an example of how they could meditate and dwell in the Force together. It’s a hypothetical scene that parallels Rey’s introduction to the balance that binds the universe together in The Last Jedi. 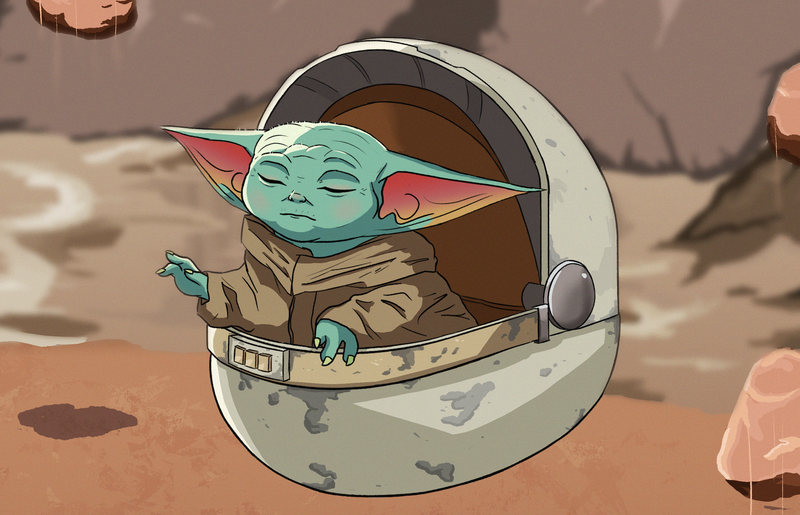 In this story, Ahsoka helps train the green alien to understand his capabilities, and utilizes the Force as a way to look into Baby Yoda’s mind in search of answers to his ambiguous origins. The floating rocks signify the energy between the pair and the rough terrain surrounding them, akin to Luke’s Dagobah training in The Empire Strikes Back.

The designs for both characters are largely based on their previous appearances. The Child’s look and floating crib come straight from Season 1, while Ahsoka’s takes inspiration from her more mature outfit in Star Wars Rebels.

With the displays of Force powers immersed in The Mandalorian’s first chapters, there’s no doubt Jon Favreau and Dave Filoni will continue this trend for the upcoming season, especially if everyone’s favorite Togruta is brought into the fold. 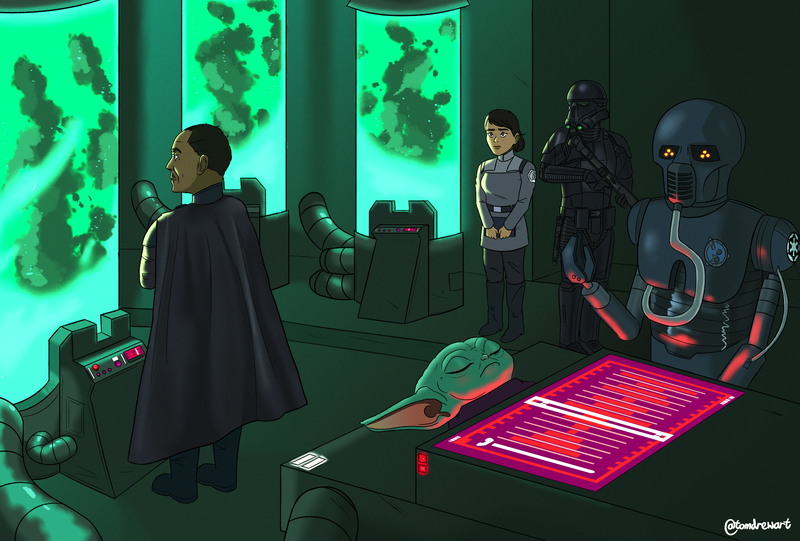 Giancarlo Esposito has said plenty to hype up The Mandalorian’s next installments, specifically when it comes to his character, Moff Gideon, and the mysterious villain’s disposition. It was his most recent comments, though, that really feeds in to this prediction.

Esposito very subtly hinted at Gideon’s potential as a Force-user in a recent interview, posing questions about his background and motivations. His words open up a whole new world of conjecture for Star Wars fans. Could it be that Gideon is hell-bent on retrieving the Child because he is using its powers to become Force-sensitive himself?

This might be a far-fetched idea, but there is a small tease in the first season’s third chapter that makes this concept realistic. In it, audiences receive a closer look at Dr. Pershing’s uniform, which possesses a symbol similar to that seen from the Kaminoans in Attack of the Clones. This same insignia can be seen on the science officer in our illustration: 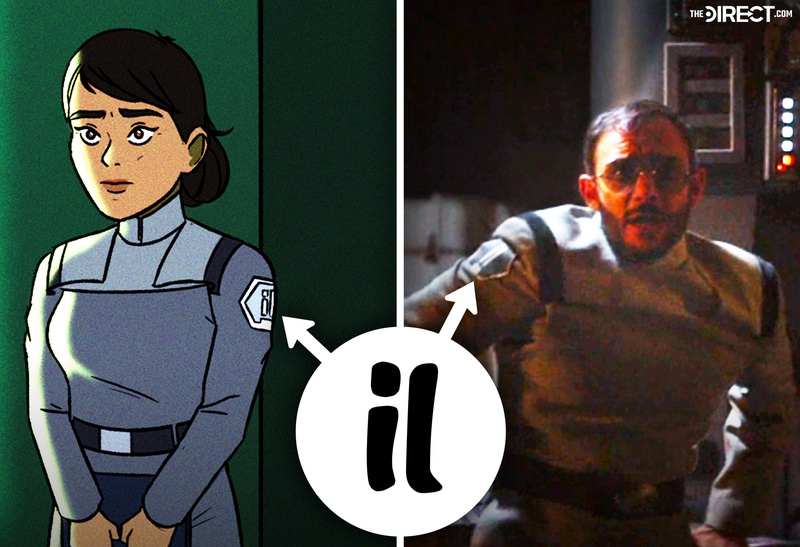 As most know, the Kaminoans were responsible for creating the Grand Army of the Republic, made up of clones from Jango Fett’s genetic material. Because of these various clues, this drawing visualizes a hidden bunker on an unknown planet, where Gideon is using this cloning technology to replicate the Child’s DNA and midichlorians.

This situation could serve as a flashback or present-day scene where Moff Gideon has recaptured Baby Yoda. With a Death trooper guarding the room, a science officer briefs Moff on their latest developments. Gideon studies the work being done inside the cloning chamber (also seen in Attack of the Clones and The Clone Wars) while a medical droid tends to the Child, who is unconscious in the same device seen in Chapter Three’s “The Sin.”

As previously mentioned, the chilling antagonist may be using this technology to gain Force powers of his own, hoping to become as dominant of a ruler as Darth Vader or Emperor Palpatine once were. On the other hand, he could be trying to use the DNA to create other Force-sensitives with the intent of creating an army to regain Imperial rule across the galaxy.

Nevertheless, slight references to Kamino will surely be welcomed by all as the series expands into the interconnected Star Wars universe.

Moff Gideon vs. The Three Mandalorians 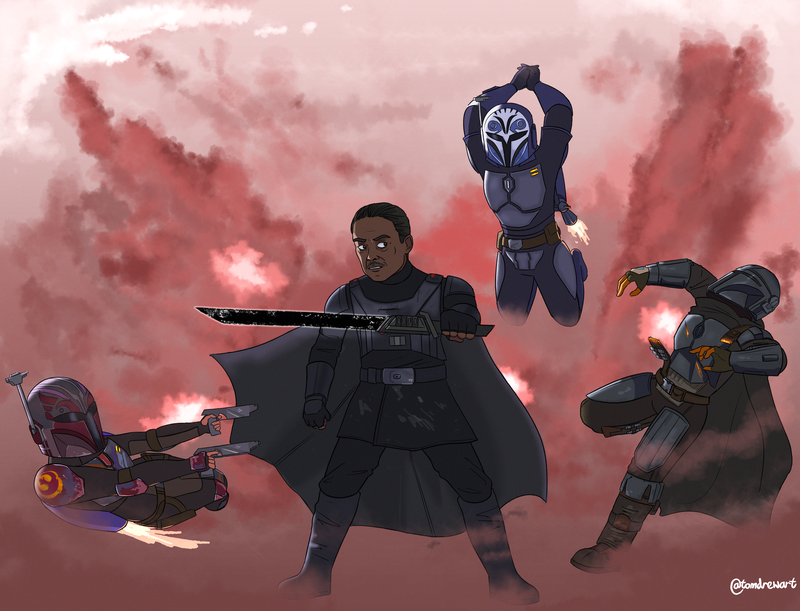 Following in the footsteps of its predecessor, this illustration exhibits Moff Gideon putting the Darksaber to work against some familiar heroes. Once again, Esposito came in clutch in another interview, stating how he likes to “go at it” when fighting with the sword, which has led to broken props on multiple occasions.

Exactly who is he battling in this drawing? Din Djarin was an obvious choice for this altercation, as Gideon will want a couple more rounds with the Mandalorian after that Season 1 finale. The other two warriors are none other than Sabine Wren and Bo-Katan Kryze, who have been heavily rumored to make brief cameos in the upcoming season. 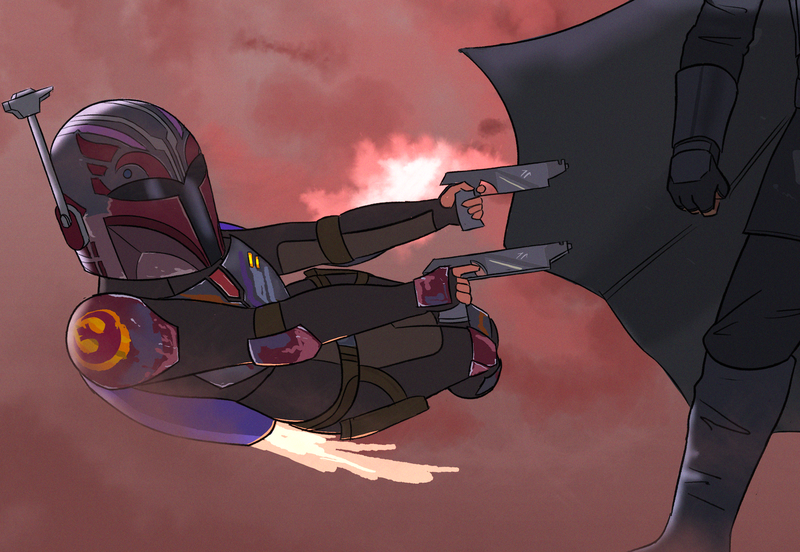 In the graphic, Mando gets a little in over his head against Gideon, and just when hope seems lost, Wren and Bo-Katan swoop in with their jetpacks and go toe-to-toe with the Darksaber-wielding Imperial. Sabine still holds the same two blaster pistols audiences saw in Star Wars Rebels, and keeps her distance from her adversary while firing at him. 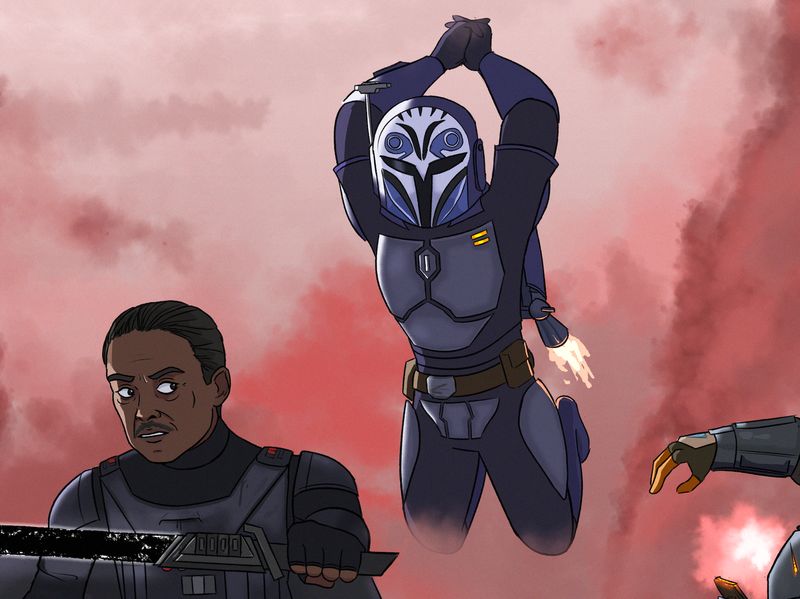 Bo-Katan opts to use her fists as she comes in from behind her rival. This personal attack highlights the notion that the two have crossed paths before, since Bo-Katan was the last person to have been in possession of the Darksaber before The Mandalorian’s finale. It’s probable that Gideon acquired the saber during the Great Purge, but nothing is certain as of yet.

We know Season 2’s action was helmed by Extraction director Sam Hargrave, so you can expect the Darksaber will be front-and-center come October. 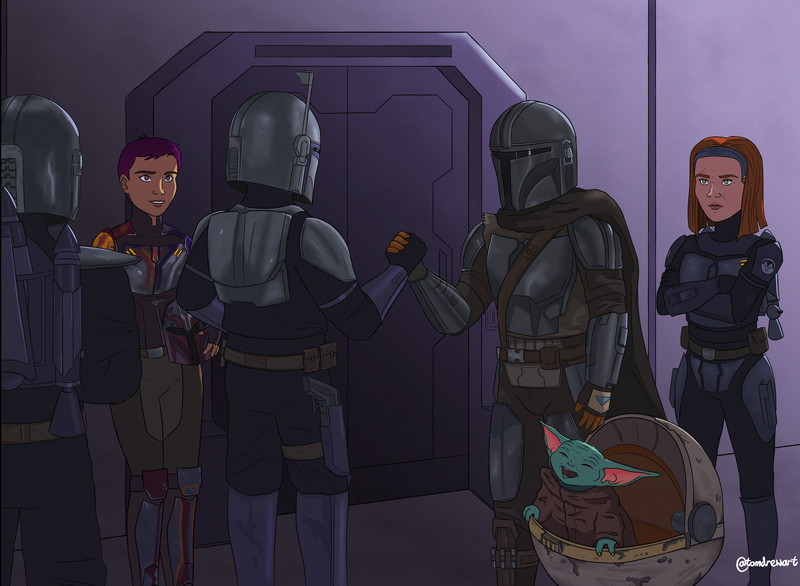 If Sabine and Bo-Katan make appearances in future episodes, it’s not too far off to suggest that even more Mandalorians will be present along with them. The Mandalorian established very early on with the Tribe that Djarin wasn’t alone in his journey, but most were killed by the Imperial remnant after they exposed themselves.

Still, their Covert might not have been the only one in existence amongst the stars, and perhaps Sabine and Bo-Katan are aware of several clans in hiding, hoping to one day lead a revolution to retake their homeworld.

It’s likely that, at the very least, Mando knows Bo-Katan by name, since she’s been a prominent figure for Mandalore since the Clone Wars (as well as her sister, Duchess Satine). Therefore, their first interaction with each other, if it’s their first, would be one of honor for Din.

After that meeting with Bo-Katan and Wren, this illustration focuses on the pair introducing Djarin to a hidden Covert just like his own on Nevarro. They explain the current state of Mandalore during this time and how other Mandalorians have joined their cause to restore the planet and its people. After this bit of exposition, they welcome Mando as one of their own. 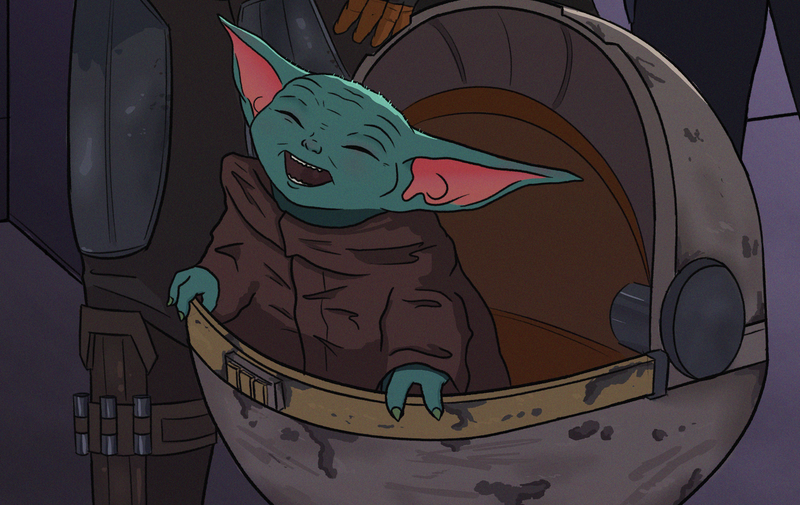 Baby Yoda celebrates in true Baby Yoda-fashion, giggling and smiling not only because his stepfather has united with another clan, but he now has more friends to play with. Just imagine the paint job Sabine is going to give to that crib of his. 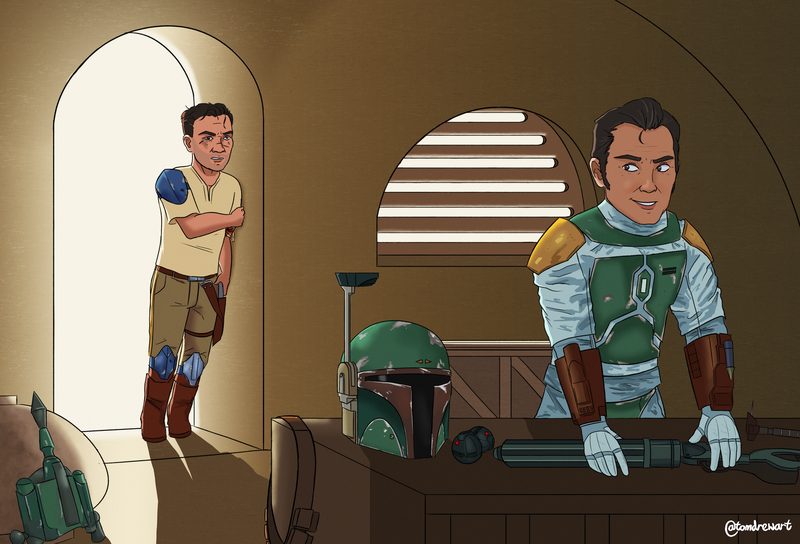 The final illustration revolves around another rumor from the grapevine. Back in May, it was reported that Justified’s own Timothy Olyphant would don the notorious armor of Boba Fett in The Mandalorian Season 2 as Freetown’s sheriff, Cobb Vanth.

Vanth made his entrance in the novel Aftermath, by Chuck Wendig. Formerly a slave, Vanth freed himself around the time of the Battle of Endor. Once he seized Mandalorian armor from some Jawas, he appointed himself as the mayor/sheriff of a Tatooine settlement called Freetown.

Because Boba Fett assumedly died during a confrontation with the Sarlacc in the Great Pit of Carkoon, many speculated that Vanth’s Mandalorian armor was in fact Fett’s, since he retrieved it around the same time as the event’s of Return of the Jedi. With this in mind, in addition to the report that Temuera Morrison was returning to play Boba Fett and Captain Rex in the same season, could the bounty hunter have survived his tussle with the carnivore and finally come to reclaim his lost possessions?

That’s exactly what encompasses the art above. Presuming Fett climbed out of the pit, he would go on a dangerous trek of survival in the scorching desert of Tatooine, a planet who’s grappling with power struggles after the destruction of both the Empire and Jabba the Hutt. This explains why we’ve made the bounty hunter look beaten, ragged, and like he’s looking for some vengeance. 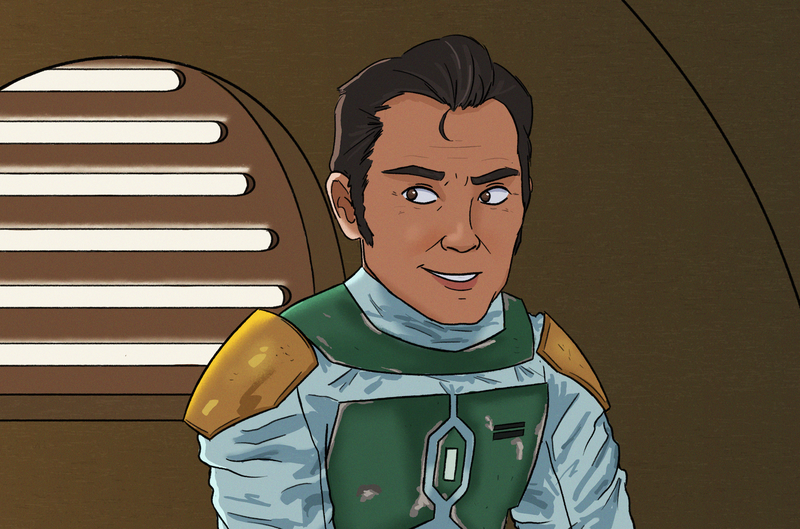 Boba would certainly try to find his missing property and a way off that old rock, leading him straight into Cobb Vanth. The sheriff has a hatred for the crime syndicates and dedicates his life to ridding their evil from Freetown and Tatooine, so he probably has no patience for bounty hunter’s either. He’s shown here wearing Fett’s armor, jetpack, and blaster right on hand, plus a bit of that Timothy Olyphant charm.

Both are known for their gun-slinging ways, so tensions will undoubtedly be high as these two cross paths.

Make sure to comment your own thoughts and predictions for the The Mandalorian's next season. And let us know what you think of the illustrated theories cataloged here. Speaking of illustrations, take a look at Tom Drew's website, Instagram, and Twitter for more of his artwork! The fantastic drawings above are just a snippet of his creative ability.