The future of Marvel Studios' Phase 4 is relatively unclear. While we know the movies and shows that Phase 4 will comprise of, there's been very few details shared about what we can expect from the MCU going forward beyond plot details. Part of this is, of course, due to the studio's tendency to maintain secrecy, but it hasn't been helped by their inability to make any substantial progress with filming due to COVID-19 .

This has left Marvel fans to speculate. Casting information, plot rumors, off-hand director comments; any little tidbit is fair game for dissection and analysis in this time of uncertainty. Sometimes it can be difficult to visualize these predictions, as there is only so much one can glean from shaky set footage.

Because of this, I’ve decided to come up with a few predictions for what we could expect from Phase 4 of the MCU and illustrate them! These range from predictions that will almost certainly happen in some form, to complete long shots that would have to take an absolute miracle to actually come to fruition.

5. Shang-Chi and the Legend of the Ten Rings 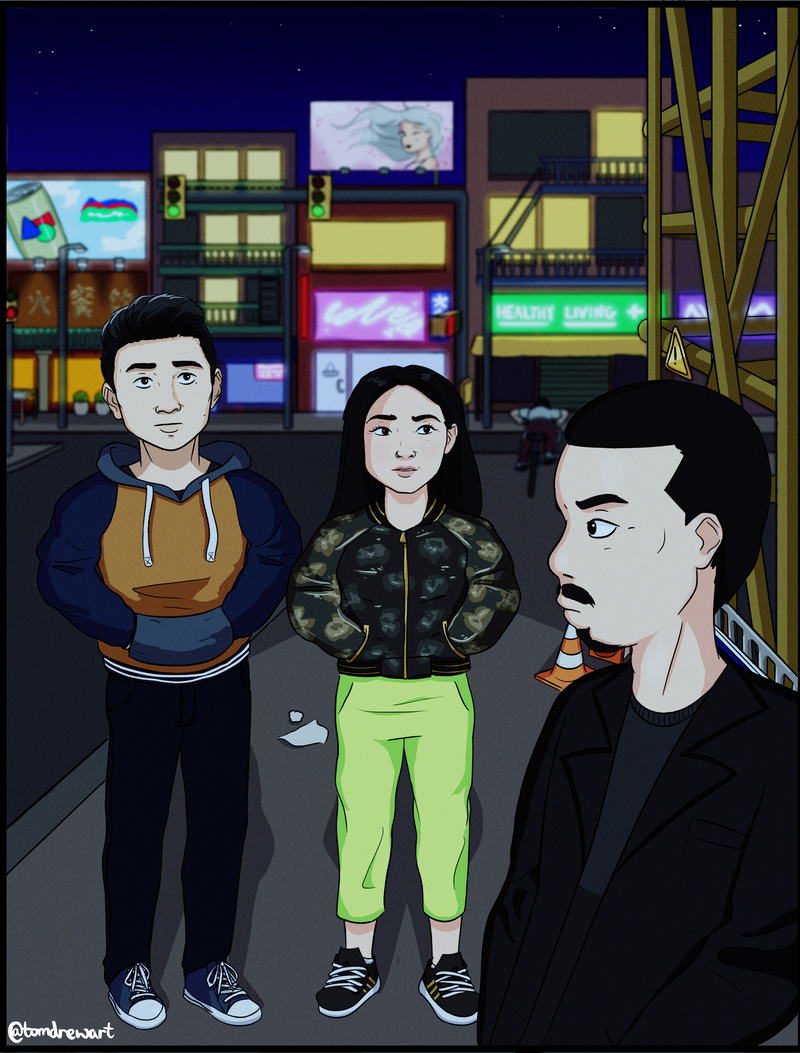 Shang-Chi and the Legend of the Ten Rings is one of the more unique films in the Phase 4 lineup, being Marvel's take on a kung-fu film and the first MCU film to have an Asian lead. Unfortunately, its filming was cut short due to lockdown and quarantining efforts, meaning there is very little official information to go off of.

Despite setbacks, some set footage did emerge from the film prior to Shang-Chi ’s production shutting down. The short video seemed to display Shang-Chi and Awkwafina’s character approaching some sort of club, potentially run by The Ten Rings. A bodyguard also imposingly blocks the entrance to the building, which looks to still be under construction judging by the infrastructure next to it.

This illustration is based on this footage, depicting an alternate angle of what can be seen in the video. Shang-Chi and Awkwafina (who I am now predicting will be playing a fictionalized version of herself) eye up the building and strategize a means of getting into the building. Visual cues in the footage point to this scene taking place in either a Chinese territory or a Chinatown district of a major city. Therefore, a variety of signifiers of these locales have been included in the background of the illustration, such as neon signs, a Chinese restaurant and various storefronts.

The bodyguard, meanwhile, suspiciously watches the two from the sidelines. Marvel is known for their humor, so it's possible there will be a fun interaction involving the duo attempting to enter the club, only to be refused by the bodyguard. This would undoubtedly be followed by Shang-Chi planting a swift karate chop to the bodyguard, quickly eliminating him and granting them access.

It is also notable that the film may be taking place in the year 2020, as suggested by several rumors and graffiti seen in the set footage. This would place the events of Shang-Chi two years after the events of Avengers: Infinity War , which could give us more insight into the state of the world following The Snap. 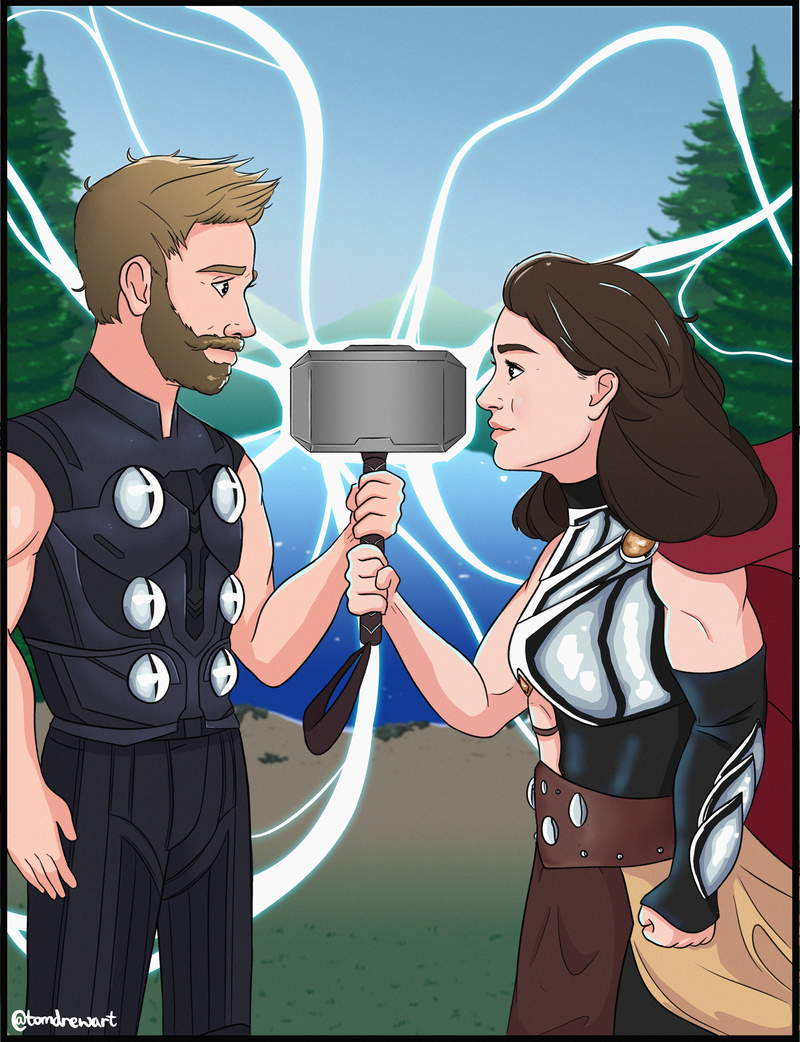 Jane Foster's reappearance in Avengers: Endgame was certainly a surprise to Marvel fans, especially given that Natalie Portman reprised the role by providing new voiceover lines. So when the actress formally attended last year's San Diego Comic-Con in conjunction with the announcement of Thor: Love and Thunder, excitement mounted over the prospects of a more involved role for Jane Foster in the MCU.

The illustration visualizes what a female Thor incarnation of Jane Foster could look like, taking inspiration from the design seen in writer Jason Aaron and artist Russell Dauterman's run on The Mighty Thor . Pictured above are Jane Foster and Thor sharing the power of Mjolnir near a mountain lake in New Asgard. The two share a longing gaze at one another, hinting at a potential rekindling of their romance that is suggested by the film's subtitle.

Portman being passed the hammer at Comic-Con seems to be symbolic of how Jane will acquire 'The Mighty Thor' mantle in Thor: Love and Thunder. Perhaps Jane Foster will stumble upon Mjolnir somehow, only for Thor to officially pass down or share the mantle as the film progresses.

How Jane Foster will actually come across Mjolnir is also another question entirely, due to Captain America taking it with him to return the Infinity Stones. Steve may just leave the hammer with Jane as an "I'm sorry" gift for the awkward re-transfer of the Aether, creating a situation for Mjolnir to deem Jane worthy.

3. The Falcon and The Winter Soldier 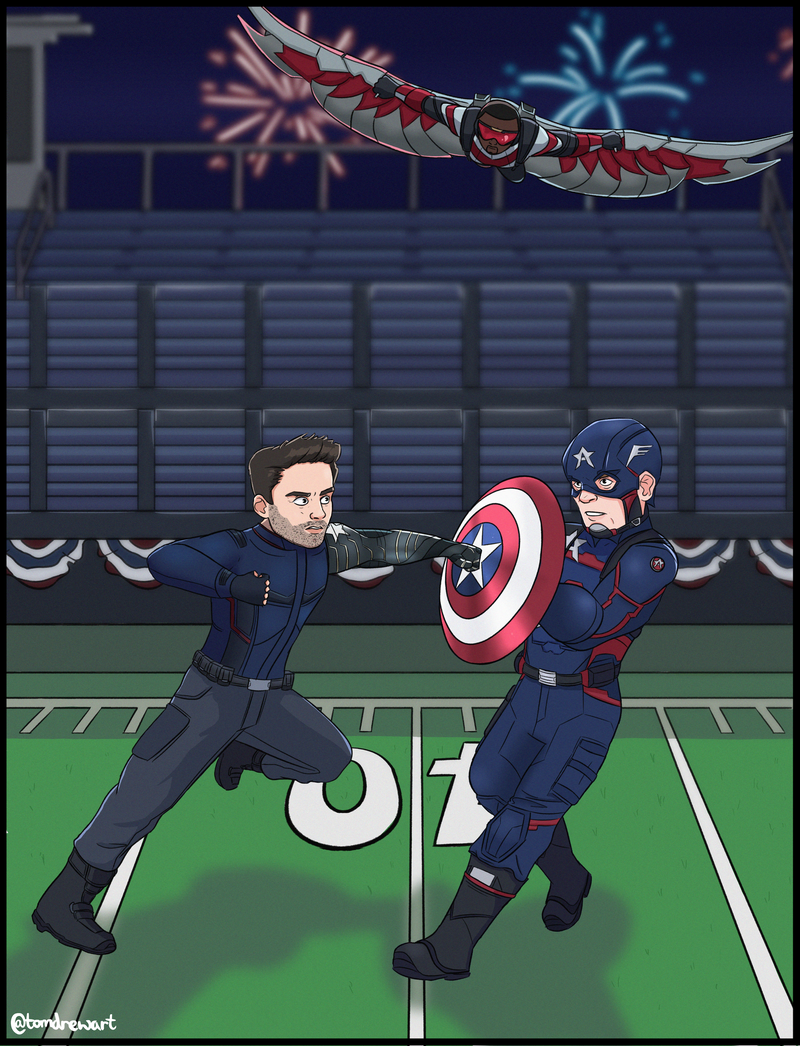 The Falcon and the Winter Soldier is another Marvel property that has been directly affected by production shutdowns, although we have been given some glimpses at what we can expect from the series.

The original Disney+ teaser for Marvel’s lineup of series featured a very brief clip of Wyatt Russell’s U.S. Agent running onto a football field. The footage seems to imply an inaugural celebration of this new, government-regulated version of Captain America. Although Anthony Mackie doubled down that he would be retaining the Falcon moniker for the time being, you can bet that him and Bucky won't be too happy with a phony besmirching Cap’s good reputation.

In this illustration, Falcon and The Winter Soldier take it upon themselves to intervene. The football field has been cleared of its attendees for the three combatants to throw down. Bucky goes in for a more direct mode of attack, paying homage to a move that the character performed in Captain America: The Winter Soldier . Sam, on the other hand, keeps to the skies, providing aerial and moral support.

Zemo's inclusion in the series definitely suggests that he will be orchestrating a larger ideological scheme based on deception. The football match seems to be a high profile event, with military personnel even in attendance. There is a good chance that this event will be televised, giving Zemo the perfect opportunity to skew public perception against Sam and Bucky.

2. Doctor Strange in the Multiverse of Madness

Doctor Strange in the Multiverse of Madness' s introduction of the concept of the multiverse leaves a multitude of options open.

In this illustration, Doctor Strange and Scarlet Witch navigate the multiverse, whilst constantly being pursued by an unstoppable, monstrous force. Simultaneously, the unstable nature of the multiverse causes the two to flit between alternate versions of themselves. This results in Doctor Strange donning the Mark 50 suit from Infinity War, as seen in concept art and set photos , and a more villanous version of Wanda emerging.

Although previous director Scott Derrickson has since left the project , it's likely that a lot of the abstract imagery from Doctor Strange will carry over to its sequel. This is especially true in representing such an abstract concept as the multiverse; therefore, pieces of shattered glass have been used to 'reflect' the alternate versions of these characters. Intersecting and contrasting colors in the background also convey the multiverse's ever-changing nature.

Doctor Strange 2 was also originally billed as being the MCU's first foray into horror. Whilst the film will seemingly no longer go head-first into the genre, it is likely that some of the spookier elements will be retained given current director Sam Raimi's previous work on The Evil Dead franchise. This has been displayed in the artwork through the inclusion of vicious creatures chasing our heroes through the multiverse.

Also making a return are Doctor Strange’s iconic yellow gloves, which have been lost ever since they showed up briefly in Thor: Ragnarok. I’m predicting we’ll have a fun scene where he rediscovers them laying around in the rubble of the Sanctum. I’m calling it.

You can also view the still versions of this artwork here or here ! 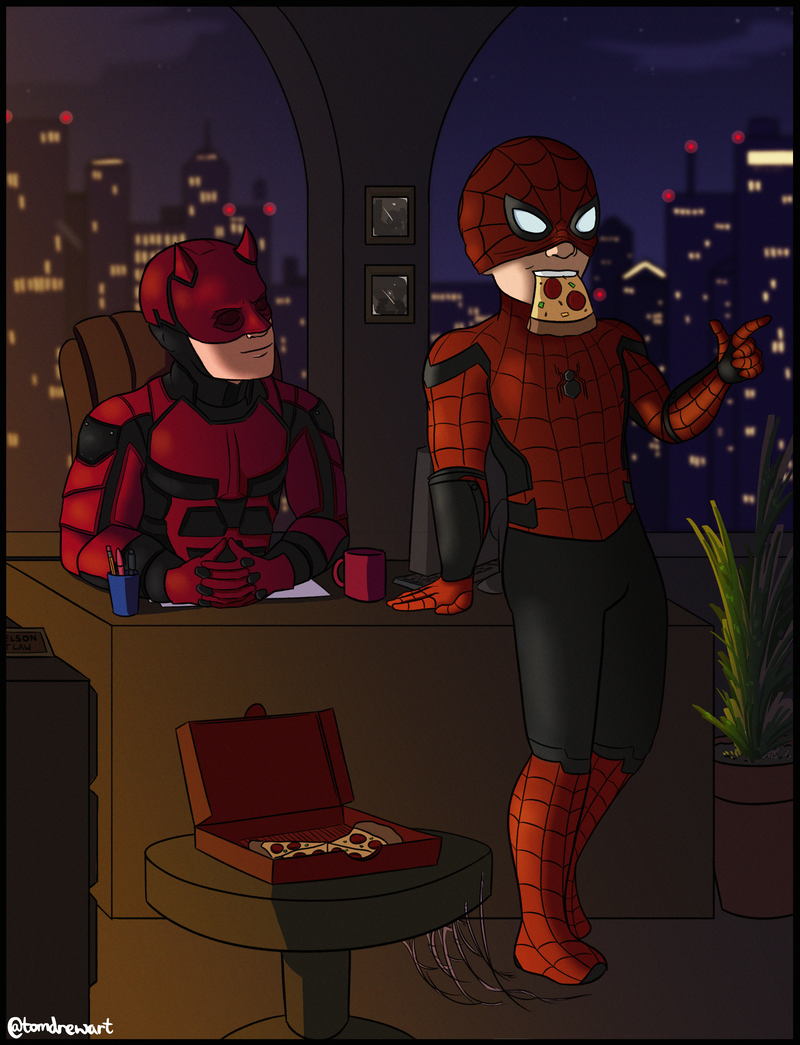 Very little is known about the state of Peter Parker in the upcoming Spider-Man 3 . Far From Home left the webslinger’s identity in flux after it was revealed by Mysterio and The Daily Bugle’s own J. Jonah Jameson. Because of this, Peter may need some extra help from a certain someone to sort this situation out, specifically someone who is familiar with legal semantics.

That individual is Matt Murdock AKA Daredevil, a character that was previously seen in the Netflix series of the same name and has been much requested by fans for a formal appearance in the wider MCU. Whether Charlie Cox returns to reprise the role or a new actor is cast entirely, the Devil of Hell’s Kitchen could prove to be a great legal (and crime fighting) asset in Peter’s arsenal.

In the illustration above, Spider-Man and Daredevil put their heads together to brainstorm a game plan for Peter's situation. The two return to Matt's legal office for their meeting, being a safe place for Peter to operate amidst the presumed manhunt following his identity reveal. Spidey, being Spidey, obviously has to pick up an NYC pizza to feast upon during this discussion-- crime fighting doesn't operate on an empty stomach!

Whilst the rights to Daredevil do not officially return to Marvel Studios for another six months or so, Spider-Man 3 's delay could potentially allow for The Man Without Fear to make a small appearance to help the webslinger out.

In case you missed it, we shared this WandaVision artwork a few weeks ago. This illustration combines the aesthetics and concept of The Brady Bunch with the Marvel Cinematic Universe. WandaVision has clear inspiration from a variety of classic television sitcoms, having many visual cues and references to sitcoms such as Leave it to Beaver and Full House in the Disney+ Marvel trailer.

The inclusion of Wanda and Vision's children, Speed and Wiccan, has also been hinted at in this trailer, but it remains to be seen whether we'll see them grow up throughout the series.

Also incorporated is Vision’s family from Tom King’s comic book run on "The Vision", in which the android builds a family for himself in order to establish some sort of suburban normality. Tom King himself indicated that the show would take inspiration from his comic book run, so there’s always a possibility that Virginia, Vin and Viv (and Sparky!) could appear in WandaVision .

Although its completely up in the air whether any of these predictions will be correct, hopefully they provided a clearer idea of potential ways the MCU could take its next few projects.

Let us know which of these illustrations was your favorite and if you have any burning predictions for upcoming Marvel films. Who knows, maybe they'll get turned into artwork for a future article!

Speaking of the artwork, I make loads of geeky drawings over on my Instagram , Twitter and my website so feel free to check those out if you liked what you've seen!

Black Adam Suffers from Worst DCEU Performance Ever In Final Market Opening
Tags: Shang-Chi and the Legend of the Ten Rings / Thor: Love and Thunder / The Falcon and the Winter Soldier / Doctor Strange In the Multiverse Of Madness / Spider-Man: No Way Home / WandaVision / MCU Phase 4 /