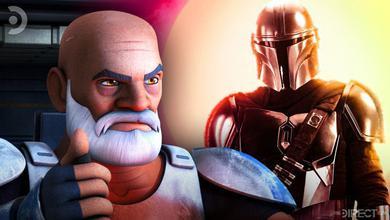 The Mandalorian is sure to dominate the Fall of 2020 when Mando and the Child return to Disney+, but the news surrounding its second season is already dominating the internet. With reports of iconic characters like Ahsoka Tano to guest star in the second season, along with some heavy-hitter actors and directors, the second season already has fan expectations at an all-time high. Then, news broke that perhaps the galaxy's most iconic bounty hunter in Boba Fett would be featured in a small role for season two, portrayed by experienced Star Wars actor Temuera Morrison. That bit of news surely could not be topped, but then again, never say never. In a new rumor, there are whispers that Morrison could be doing double-duty, also portraying an iconic Clone Wars character in The Mandalorian's next season.

Diving deeper into the report of Boba Fett appearing in The Mandalorian season two, Nerdist shared the thought that Temuera Morrison would not be limited to solely portraying the iconic bounty hunter. In fact, Morrison could also be portraying an iconic Clone Wars character:

"And while the report doesn’t mention it, we think it’s highly probable Morrison won’t just play Boba Fett. Reliable sources agree. I mean, how could Ahsoka appear on The Mandalorian without Captain Rex?

Those reliable sources in agreement come in the form of Jordan Maison, Editor-in-Chief of Cinelinx, who has heard similar whispers regarding Temuera Morrison doing double duty in season two:

Boba Fett isn’t the only role Temuera Morrison will play in the show....#StarWars

If there's no C-3PO without R2-D2, then you cannot have Ahsoka Tano without Captain Rex. The iconic character, introduced in The Clone Wars film and animated series, has been a staple alongside Ashoka, who we know will appear in live-action in The Mandalorian's second season, and possibly further into the future. Rex, a Commander within the 501st legion, served in the Clone Wars under the command of Ahsoka Tano and was successfully given his free will in the aftermath of Order 66 thanks to her.

The two are a bonded duo, and if Ahsoka is set to appear in live-action form, it makes sense to have Captain Rex alongside her in some capacity. Given that he is a clone of Jango Fett (whom Temuera Morrison portrayed in Attack of the Clones), having Morrison do double-duty makes even more sense. Did Dave Filoni, an executive producer on the Disney+ show, give us a tease way back with his new Twitter header? If he did, then season two will surely blow fans' minds as the expectations are ramping up to be.