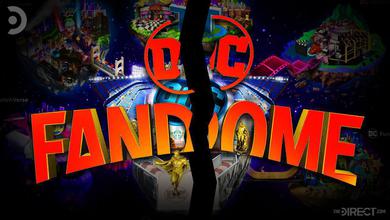 The future of the DCEU will be known during the much-anticipated DC FanDome event this week. At this point, it is expected that major reveals about DC entertainment will surface during the event. The virtual affair will gather every DC property across various forms of media which include films, TV shows, comics, and video games.

Anticipation is high for DC FanDome ever since its announcement, and the hype further elevated due to the string of teasers that were released in the past few days. It has been confirmed that the online event will feature a plethora of guest stars while its jam-packed schedule promises a unique experience to fans.

Unfortunately, a slight change of plan about the proceedings of DC FanDome has recently surfaced.

Deadline shared in a report that DC FanDome "has now expanded into two global events" which is now set to feature DC FanDome: Hall of Heroes on August 22 and DC FanDome: Explore the Multiverse on September 12.

"DC FanDome: Hall of Heroes: On Saturday, August 22, at 10:00 am PDT, fans will be transported into the DC FanDome: Hall of Heroes, an epic world designed personally by Jim Lee featuring special programming, panels and exclusive reveals from a wide variety of films, TV series, games, comics and more. The superpowered eight-hour show will be available for fans around the world to watch exclusively 3 times in the 24-hour period."

Meanwhile, Explore the Multiverse will provide fans the chance to "create their own timeline" by utilizing the Official DC FanDome Online Scheduler Tool from the convention's website:

"DC FanDome: Explore the Multiverse: On Saturday, September 12, at 10:00am PDT, fans will be able to create their own timeline! The great thing about this event is that it will be on demand, giving you the ability to curate your own unique experience via our Official DC FanDome Online Scheduler Tool. A lot of the content you were super excited to see from our multiple islands will now be housed here, and will be available for you to watch throughout the 24-hour period. Fans can now choose their own adventure and will have more time to immerse themselves in all the hours of curated programming — at their own pace and on their own schedule. DC Kids FanDome will also launch on Saturday, September 12, at its own kid-friendly companion site at DCKidsFanDome.com."

In a separate report, IGN has shared a snippet of the official press release of DC about the major schedule change:

"We heard the fans. DC FanDome, a first-of-its kind, virtual experience for DC superfans around the world, was a lot to handle in one day! It turned out to be so massive that with so many hours of programming, not even The Flash could get through it in 24 hours!"

Still, all content from both major events will still be available in nine languages.

The updated schedule of panels for this Saturday has also been released (Times in ET):

BAWSE Females of Color Within the DC Universe - Panel - 3:40 pm

CNN Heroes: Real-Life Heroes in the Age of Coronavirus - 6:30 pm

Tomorrow's Super Heroes with Jim Lee brought to you by Gold House - 7:25 pm

On the surface, this recent development about DC FanDome just goes to show how massive this online convention will be. Even if this change of plan will slightly change the expectation of fans when it comes to experiencing a 24-hour nonstop extravaganza, the compressed eight-hour show still has the means of providing a wide array of surprises and reveals. It's worth pointing out that Hall of Heroes includes major panels such as Wonder Woman 1984, The Suicide Squad, and The Batman, so it's a safe bet that every reveal will go as planned.

Splitting DC FanDome into two separate global events makes sense since it guarantees that fans will not be overwhelmed by the amount of major reveals that will arrive during the event. Based on the original schedule, there are some panels that overlapped with one another, but that will all change given this recent confirmation.

The press release from DC seems to acknowledge the fact that the original schedule "was a lot to handle" for fans, and this major change goes to show that they are keen on listening to their feedback. After all, it's clear in the marketing of DC FanDome that this is a fan-driven event.

To recap, Hall of Heroes will set the stage for the major announcements about DC entertainment while Explore the Multiverse will lean towards a more customizable experience for fans. All things considered, it seems that DC planned a perfect balance between content and experience, and a peak of what's in store will be revealed during the first half of DC FanDome this Saturday, August 22.