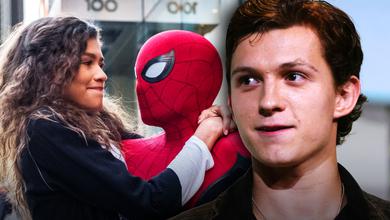 The Marvel Cinematic Universe is back to being as busy as ever while working to launch the beginning of Phase 4, starting with WandaVision on Disney+. With multiple other new series deep into both filming and production, the movie side is just as busy as ever, too, with eight new big-screen adventures set to release over the next two years.

Marvel Studios has already completed filming multiple movies such as Black Widow, Shang-Chi and the Legend of the Ten Rings, and Eternals, which are all in various stages of post-production. This doesn't even include one of the most highly-discussed films of the last few weeks: Spider-Man 3.

Now, a new set video has just released, teasing some of the first exciting action from the set of the next Spidey film...

A new video from Twitter user @chrjstopherpine revealed a new look into the set of Spider-Man 3, featuring stuntwork by lead actors Tom Holland and Zendaya. The video shows Spider-Man and MJ (dressed in what appears to be her costume from the ending of Far From Home) jumping from a ledge about 50 feet in the air while attached to a rope, and a camera is right in front of them capturing the action.

With the widespread grassy area surrounding Holland and Zendaya, there is no way to tell exactly what sort of plot details are involved with this shot, although it’s as exciting as ever to see the two back in action. Holland in particular has made a name for himself as one of the most physically gifted actors in the MCU by doing most of his own stuntwork the last five years, and with so much crazy action expected for Spider-Man 3, he will undoubtedly have his work cut out for him.

There are still no specific plot details confirmed for Spider-Man 3, but the casting announcements for Benedict Cumberbatch as Doctor Strange and Jaime Foxx as Electro are sure to make it one of the most insane solo movies in the web-slinger’s long movie history.

The new movie is currently in the early stages of shooting in anticipation of release on December 17, 2021.