Hawkeye: Hailee Steinfeld Rumored to Be Signed on for Disney+ Show as Kate Bishop 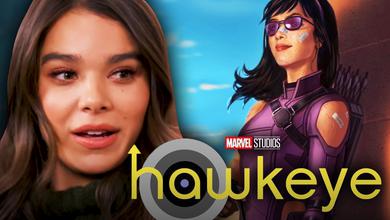 Many Marvel Studios productions and projects have been put on hold and delayed due to the ongoing coronavirus pandemic, and the upcoming Hawkeye Disney+ series hasn't been an exception. It's barely gotten its feet off the ground, but recent news and rumors of casting of ongoing characters and several directors taking the helm have been promising.

Now, it seems as though the archer-centric show has found its co-lead in the form of a long-rumored actress...

An exclusive report from The Illuminerdi reported that Hailee Steinfeld has now signed on to join the cast in Hawkeye as Kate Bishop, a co-lead character alongside Jeremy Renner's titular archer.

Moreover, production on Hawkeye is supposedly starting this October in Atlanta, Georgia.

As aforementioned, Hailee Steinfeld has been eyed for the role of Kate Bishop since late 2019, shortly after Hawkeye was officially announced at last year's San Diego Comic-Con. However, complications arose due to her contract with Apple TV+, Apple's own streaming service. If this rumor is believed to be true though, then Steinfeld may have either found a loophole in the contract or obtained approval from Apple to pursue other streaming projects.

Hopefully this casting is secure, because if Hawkeye is also starting production this October, that leaves under three months for the co-lead to be set, prepped, and ready when cameras start rolling. As is, Hawkeye is slated for a 2022 release, so two years should be more than enough time for filming and post-production—if everything else Marvel Studios has on the docket goes according to plan. The franchise is gearing up to resume production on multiple projects, such as Shang-Chi and the Legend of the Ten Rings, so that light at the end of the tunnel is growing brighter.

Either way, this casting is still merely a rumor, and definitely not a given. Fans should be on the lookout for (hopefully) an official announcement from Marvel Studios or Steinfeld herself.