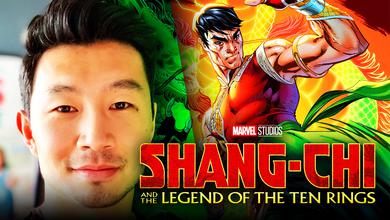 Marvel Studios is currently revamping the promotional tour to prep for its long-awaited theatrical release slate for Phase 4 which has faced constant delays for over a year. While the only movie with any material released thus far is Scarlett Johansson’s Black Widow, three more blockbusters will make a splash in theaters before 2021 comes to a close.

Included in this bunch is the first new solo franchise in Phase 4, Shang-Chi and the Legend of the Ten Rings, coming as the MCU’s first-ever September release. Labor Day weekend will introduce Simu Liu’s Master of Martial Arts in a story unlike any the MCU has seen before, pitting the newcomer against a hoard of adversaries before he faces Tony Leung’s real Mandarin.

Due to a lack of footage from the movie, fans have had to rely on leaked plot details and images on social media for intimate details about it. Thankfully, social media has just provided the best look yet at the lead hero...

Twitter user @thattreycarvel shared an image showing a Marvel Legends figurine of Shang-Chi from Shang-Chi and the Legend of the Ten Rings. These shots show off Simu Lui’s dark red costume with black lines adding to the design.

All the leaked images can be seen in the below:

GIVE US THE TRAILER, MARVEL!

Marvel Studios’ costume design has always been on point, whether they come in real life or in post-production. This one is no different, making Simu Liu look absolutely incredible in his full hero get-up.

The big mystery now is finding out how Shang-Chi finds his way into the costume and how it plays into his hero’s journey. This is one of many mysteries over which Marvel is letting fans stew with the movie only five months away from releasing.

While this leak is obviously an exciting look at Shang-Chi, fans continue to wait patiently (or impatiently) for the first official pictures and images from the second movie of Phase 4. Even with a marketing campaign that’s been thrown completely off its axis due to the state of the world, the film inches closer to its release date with not even so much as a tease so far.

Shang-Chi and the Legend of the Ten Rings will debut in theaters on September 3, 2021.