With Avengers: The Kang Dynasty and Avengers: Secret Wars unveiled as the climax of the MCU's Multiverse Saga, fans are well aware of where this current era of the franchise is heading. As the threat of Kang the Conqueror begins to emerge across multiple projects, one can only wonder what nefarious plan he has in mind.

During the Infinity Saga, Thanos made his plan of assembling the Infinity Gauntlet instantly apparent, with Avengers: Infinity War eventually unveiling his ultimate plan to wipe out half of all life in the universe. For now, all that has been revealed about Kang's plan comes with his many Variants' goal of Multiversal domination.

Phase 4 may have started off rather disconnected, leading to controversy among fans, but the pieces of a larger puzzle are gradually weaving together. Now, following rumors of one connecting thread that the MCU has so far only teased, Shang-Chi's post-credit scene may have become more important to Avengers 5.

The Illuminerdi previously reported that a series of mystical weapons - including Ms. Marvel's Bangle and Shang-Chi's Ten Rings - will serve as the interconnecting MacGuffins of the Multiverse Saga, just as the Infinity Stones did during the last era of MCU storytelling.

According to the site's sources, the ancient weapons will somehow be connected to each other, having been left by an alien race some time ago. Although the insiders were unable to determine which race this could be, they listed off the Kree, Celestials, and Makluans as a few possibilities.

With these weapons from completely different franchises expected to be pivotal to the Multiverse Saga, one can only imagine they will tie to the big bad of the next Avengers blockbusters: Kang the Conqueror. But how exactly could the time-traveling foe connect to these various weapons?

During the post-credits scene of Shang-Chi and the Legend of the Ten Rings, Sorcerer Supreme Wong revealed to the new hero that, when he first used them, the Ten Rings sent out a signal into the universe, presumably to their point of origin, wherever that may be.

After studying the powerful weapons, Bruce Banner concluded that the rings are not vibranium and are far older than the 1000 years the Mandarin had them. Meanwhile, Carol Danvers stated that the weapons are not Chiutrai in nature and are unlike any alien tech she has ever seen:

Wong: They don't match any artifacts in our codex. What do you think?

Banner: Um, I'm not sure. They're not vibranium. Chiutari?

Danvers: Not like any alien tech I've seen. How long did your dad have them before he gave them to you.

Banner: Their thermoluminescence indicates they're older than that by a lot.

So, Shang-Chi's Rings, and by extension perhaps Ms. Marvel's Bangle too, don't appear to be magical, scientific, or familiarly alien, but one thing is for certain, they have been on Earth for a long time. This leaves many open questions surrounding the origin of these objects, particularly after Ms. Marvel gave some clues.

Flashbacks to The Partition revealed Kamala Khan's grandmother Aisha found the Bangle in a Ten Rings temple, suggesting the Mandarin's organization may have been studying other objects of this nature. As this was found on a blue arm, many had speculated the artifact to be Kree, but there's one problem with that.

With Captain Marvel being Kree herself, one would imagine her to be familiar with the Ten Rings' design if they came from her homeworld. The Makluans, who created the rings in the comics, were a popular theory among many, but their green, dragon-like nature doesn't exactly link up with the blue arm.

How the MCU is Secretly Teasing Kang the Conqueror

Having looked at some options for where these ancient artifacts may have come from, one has to consider how they fit into the puzzle of the Multiverse Saga. Did these weapons and objects belong to Kang all along? Or will he be on the hunt for them as part of his nefarious plan?

With Kang the Conqueror being the ultimate threat of the saga that these artifacts are supposedly at the center of, one has to imagine him to be connected. But since the Infinity Saga already had Thanos collecting these central MacGuffins, Kang likely won't be on the hunt for these weapons as his primary motivation.

As these artifacts are known to have been on Earth for thousands of years, perhaps Kang, or one of his Variants, was the one to leave them there in the first place. After all, there is precedent for the time traveler spending time in the early days of humanity thanks to the Rama-Tut incarnation of the character.

Nathaniel Richards has gone by many names over the years, from Iron Lad to Kang the Conqueror, but Rama-Tut was among the most intriguing. Having originated on Earth-6311, Richards took a time travel trip to the Ancient Egypt of Earth-616 but had become blind in the process.

Using weapons and drones aboard his time ship, the Kang Variant was able to conquer Egypt and appoint himself as Pharaoh under the name Rama-Tut, as well as restore his vision with a radioactive herb. Rama-Tut had conflicts with many time-traveling modern heroes including the Avengers and Fantastic Four.

Had all this played out in the MCU and Kang the Conqueror have spent some time in Ancient Egypt, it stands to reason he may have left some of his advanced creations in the past, either accidentally or on purpose. Much like the Bangle and Ten Rings, these could then have surfaced over the course of thousands of years.

There already exists some basis to speculate that Rama-Tut exists in the MCU thanks to the Egyptian-focused Moon Knight. During Marc Spector's fight with a thug, the back of his opponent's jacket shows a headpiece that resembles that of Rama-Tut's, with Kang's famous purple and green colors even present. 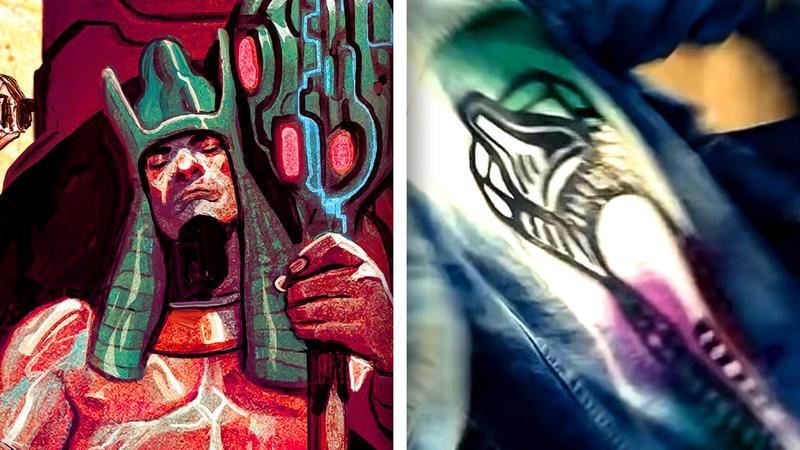 New Rockstars were able to confirm with the Moon Knight team that this design was an intentional reference to Rama-Tut. At one point in the season, Arthur Harrow mentions that the goddess Ammit once had an Avatar who betrayed her, which some speculated may have been Rama-Tut, aka Kang the Conqueror.

With the MCU establishing artifacts that have ties to ancient history, two projects come to mind as having clear potential to further unravel that mystery - Eternals and Moon Knight. An unconfirmed follow-up to either Phase 4 entry has plenty of opportunity to utilize their historical-focussed plots to pull in the likes of Rama-Tut.

With two of these ancient artifacts - that may have once belonged to Kang - having already been introduced in Phase 4, one can only imagine there are more to come, especially for these to be so central to the Multiverse Saga. Some may well even have appeared already, and fans just don't know it yet.

The Wrecking Crew recently debuted in She-Hulk as a group of thugs serving an as-yet unrevealed boss, but questions still surround the origin of their weapons. The villainous team each came accompanied by a glowing mystical weapon in a similar style to that of the Bangle and the Ten Rings.

The crew's debut originally saw She-Hulk ask them if they "[robbed] an Asgardian construction worker," to which one answered, "yeah," but that didn't appear to be a serious answer. Perhaps these weapons are part of this same ancient class of artifacts with that reveal still to come later.

Eternals could have revealed another of these objects with the Ebony Blade - a sword connected to Dane Whitman's family lineage that gives the beholder the powers of the Black Knight. As this ancient blade spans generations, perhaps this has also been around long enough to come from this same class. 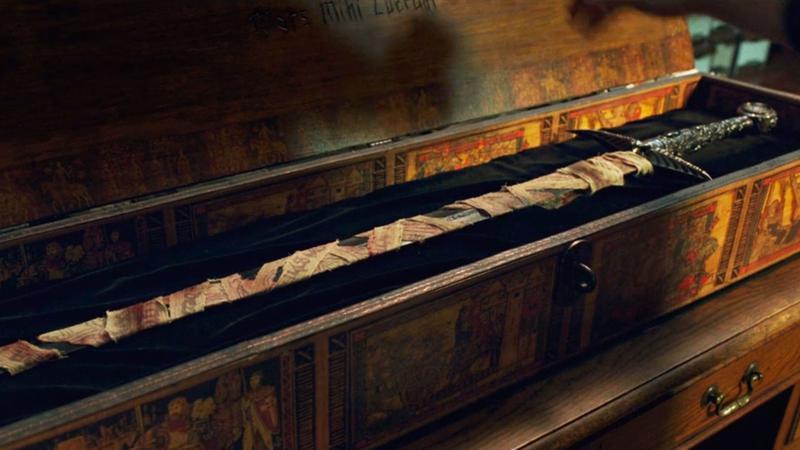 Whether these weapons were originally connected to this overarching story or not, they could still evolve into it. After all, the Tesseract and Loki's Scepter originally had no ties to the Infinity Stones, having been retconned into the story later on, so perhaps the same may be done here with the Multiverse Saga.

When WIll the Multiverse Saga's Big Mystery Unravel?

In terms of trying to determine when the connections between these artifacts will eventually be unraveled, that leaves a much tougher question. Perhaps The Marvels will bring some answers as Captain Marvel gets up close with Kamala Khan's Bangle having already closely studied the Ten Rings.

Or, with Kang possibly at the center of these connections, some insight could come in Ant-Man and the Wasp: Quantumania or Loki Season 2, both of which he is expected to appear in. Perhaps Rama-Tut could even come into play in Fantastic Four or Moon Knight Season 2 ahead of Avengers 5.

But with these objects appearing to stem from the ancient history of humanity, Eternals 2 may be the most logical place to pull on this thread. Granted, Marvel Studios has yet to announce the sequel still, but it could still enter production just in time to arrive in 2025 in the midst of The Kang Dynasty and Secret Wars.

Whatever the case, all ought to be revealed by the time the Multiverse Saga's climactic Avengers blockbusters roll around. Whether they came from Kang the Conqueror himself, the aliens who will inevitably serve him against Earth's Mightiest Heroes, or something different altogether, answers are on the horizon.