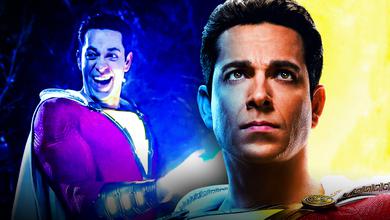 Despite the complications COVID-19 posed for film schedules and shoots, the DCEU shows no signs of slowing down. In addition to Zack Snyder's cut of Justice League coming to HBO Max on March 18 and James Gunn's The Suicide Squad slated for an August 6 release, fans are also anticipating the announced sequel to 2019's Shazam!

Titled Shazam: Fury of the Gods, the sequel will see the return of director David Sandberg and Zachary Levi as the adult hero personality to Asher Angel's Billy Batson, as well as his newfound family with their own adult superhero personas.

And while both Sandberg and actor Ross Bulter have implied the sequel would be filming soon, the current global situation and its impact on Hollywood have left fans in the dark as to when.

In a recent appearance on The Carlos Watson Show, actress Meagan Good, who plays the superhero version of Faithe Herman's Darla Dudley, confirmed that Shazam!: Fury of the Gods is set to begin filming in May.

Meagan Good has confirmed that ‘SHAZAM: FURY OF THE GODS’ begins filming in May! pic.twitter.com/D1QWVBnQUs

TIME IS OF THE ESSENCE WHEN FILMING SHAZAM: FURY OF THE GODS

Like most films during these unprecedented times, Shazam!: Fury of the Gods has been pushed back several times but currently holds a June 2, 2023 release date. And in order to meet that date, filming needs to begin as soon as possible. But, unlike other films in the DCEU, this Shazam! sequel has another reason to race the clock.

The Shazam! films are unique in that they have a cast of kids. And, as Zachary Levi said in an interview back in 2020, "We gotta get to it fast, the kids are growing fast."

This is especially critical now that Billy Batson's brothers and sisters now have superhero alter egos, meaning the kids could have more screen time than they did in the original film.

In addition, fans are beginning to hear more about the plot of the upcoming film now that it's approaching the start of filming, such as rumors suggesting three evil sisters will share the villain role for the film and that there will be ties to Black Adam.

If filming does indeed start in May, it's safe to say fans should hear something more concrete about this sequel and its progress in the coming weeks.