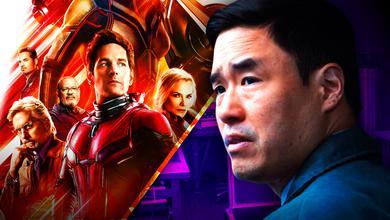 From Captain Marvel's Monica Rambeau to Thor's Darcy Lewis, WandaVision has brought together an ensemble cast from all corners of the MCU. One of the best additions to the team has been Randall Park's Jimmy Woo. Last seen in Ant-Man and the Wasp as Scott Lang's parole officer, Jimmy has moved on to work as an agent of SWORD at the Westview bubble.

Now that Ant-Man and the Wasp: Quantumania is on the slate, questions have been raised about whether Jimmy would return for another Ant-Man movie (and another magic trick). But Randall Park isn't so sure...

In an interview with Extra, Randall Park was asked whether Jimmy Woo might make an appearance in Ant-Man and the Wasp: Quantumania. Park was unsure, saying:

"I don't know. I haven't gotten the call. If I do get the call, I'm on it. If I don't get the call, that's fine too because I'm in Westview New Jersey right now. You know, gotta focus on one case at a time."

Jimmy Woo was a scene-stealer in Ant-Man and the Wasp, so it would be great to see him interact with Scott Lang again. Similar to Kat Dennings and her role in Thor: Love and Thunder, Park is still unsure if he'll return to his home franchise; although, it sounds like Park would be keen to come back for another Ant-Man if Marvel does come calling.

With production for WandaVision well and truly wrapped up, Park should hopefully be free for an Ant-Man 3 appearance if he does get the call. As the film reportedly begins filming in Spring 2021, Park should be expecting a ring in the next month if Jimmy Woo has a chance at coming back in Quantumania.

Jimmy's latest appearance in Episodes 4 and 5 of WandaVision has earned huge praise from fans. In fact, he's been such a hit that there have even been calls for Jimmy to get his own Marvel spin-off show on Disney+. Writer and director Stephen Ford is apparently developing an X-Files-style pitch for a Jimmy Woo series at the moment. So, whether he returns in Ant-Man 3 or not, WandaVision might not be the end of the road for Jimmy in the MCU.

Ant-Man and the Wasp: Quantumania is rumored to release some time in 2022.