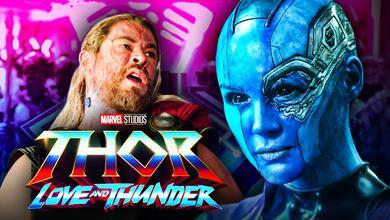 Marvel Studios is continuing the legacy of Norse and Asgardian mythology in a big way with Phase 4. This is highlighted by the current Disney+ run for Tom Hiddleston's Loki on Disney+ before 2022 brings Chris Hemsworth's fourth solo theatrical movie in Thor: Love and Thunder.

Next year's summer blockbuster will continue a trend that sees the MCU's solo movies featuring a host of the franchise's biggest heroes, similarly to 2016's Captain America: Civil War and 2022's Doctor Strange in the Multiverse of Madness.

This is the same situation in Love and Thunder, which will not only feature returning heroes like Jane Foster and Lady Sif, but also the entire Guardians of the Galaxy team after they left Earth with Thor in Avengers: Endgame. Even after forming a fun dynamic in their own solo movies, they will be taken to new levels of insanity under the direction of Taika Waititi.

For one particular member of the Guardians, this means exploring a side of her hero that's barely been shown in past outings.

A NEW "BONKERS" NEBULA IN LOVE AND THUNDER

Nebula actress Karen Gillan spoke with Collider about her experience with director Taika Waititi on 2022's Thor: Love and Thunder.

In the interview, Gillan spoke about Waititi "[bringing] out the bonkers side" to the troubled daughter of Thanos, continuing to say that the cast and characters in the movie are "just really, really funny and bonkers and wild."

Clarifying her comments, she explained that Nebula isn't necessarily "finding herself funny or being funny," but rather that fans "will find her funny" with her classic "seriousness" and "the pure aggression" that comes with this hero:

“I don’t know if it’s personal [levity]. Like I don’t think she's finding herself funny or being funny, but in her seriousness I think we will find her funny, and just the pure aggression that we’ve tapped into.”

Nebula has classically been one of the more stoic and grounded heroes within the MCU, which makes sense considering her deeply troubled past that included constant torture from Thanos. Now that she's free from her father's tyrannical grasp and surrounded by her adopted family after Avengers: Endgame, her slate for redemption and evolution is wide open.

Cue up her next appearance in the Chris Hemsworth-starring Thor: Love and Thunder, which will quite possibly be one of the wildest cosmic adventures the MCU has ever attempted.

While the Guardians' role in Thor's fourth solo outing will likely not be too extensive, their relationship with the God of Thunder through their galactic travels will have to be explored after leaving Earth together. Throw in the fact that Taika Waititi is directing this new film, and even Nebula is due for inclusion in some expectedly comedic events.

Nebula has found a way to bring humor through those surrounding her with her hard-nosed demeanor in past films, although with the weight of the universe off her shoulders, she should be able to let loose and be more of herself this time around. With Chris Hemworth's role getting funnier with each MCU appearance, and his rivalry with Star-Lord sure to come into play, Gillan should also have the chance to shine in her own right in the comedy department.