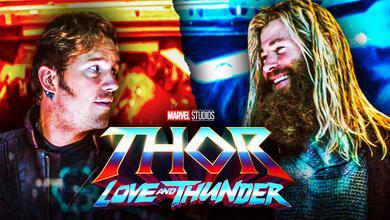 While many of Marvel Studios’ movies are rightfully focused on Earth-bound heroes, the end of the Infinity Saga helped set the stage for the franchise’s intergalactic expansions. This is fully continuing with 2023’s Guardians of the Galaxy Vol. 3, but it will also come into play one year earlier with Chris Hemsworth’s Thor: Love and Thunder.

The core heroes of these two solo stories are set to team up in Thor’s fourth solo outing, picking right up from where they left off in 2019’s Avengers: Endgame. That blockbuster outing finished with the God of Thunder hitching a ride on the Guardians’ Benetar while he argued with Chris Pratt’s Star-Lord about who was really in charge of the next mission.

Fans gravitated toward this rivalry in that film and Avengers: Infinity War, which is seemingly set to continue going forward…

MCU star Chris Pratt spoke with Yahoo Entertainment about his upcoming appearance in 2022’s Thor: Love and Thunder. Specifically, he touched on the budding rivalry between his Star-Lord and Chris Hemsworth’s Thor.

Pratt reflected on it being “something [they] found in the Avengers” and commented on how “people seemed to like it.”

He continued to praise Thor: Ragnarok director/writer Taika Waititi for having “a vision for it” and revealed that Love and Thunder “picks up on that same vein” when both heroes return:

“HE’S TRYING TO COPY ME”

The rivalry between Star-Lord and Thor came to life almost instantly upon their initial meeting in 2018’s Avengers: Infinity War. Nearly the very moment in which Thor began interacting with the Guardians, it became clear that jealousy and even a bit of content were brewing between two-thirds of the MCU’s Holy Chris Trinity.

While Peter Quill was lost in The Snap, the two picked up right where they left off after five years with their verbal sparring over who was really in charge. Fans immediately wanted more, especially with the high likelihood that this wouldn’t be the last they’d be seen together.

While it’s unclear how big the Guardians’ role in Thor: Love and Thunder will be, this rivalry appears to be alive and well after they depart Earth. This only adds to the epic cosmic action set to arrive in the MCU’s first fourth solo movie for any hero to date, and the excitement is building with filming having officially completed.