The DCEU is currently ramping up to release an all-new slate of films starting at the end of 2020, which the studio is hoping will start to put the franchise back on the map in a more positive light. One of the most highly-anticipated of these new films is The Suicide Squad , the sequel/reboot of David Ayer's Suicide Squad set to release in the summer of 2021. The new film is being helmed by one of the most open and fan-friendly directors in all of Hollywood, and he even put out a new social media blast concerning one of fans' biggest questions about the new film.

In a new blast on Instagram live via Reddit , The Suicide Squad director James Gunn was asked by a fan exactly why the movie's title included "The" in it and if it would ever be changed. Gunn replied with this message: "I brought it up kiddingly once and Warners and the producers liked it. There's not much chance of it changing, but you never know." 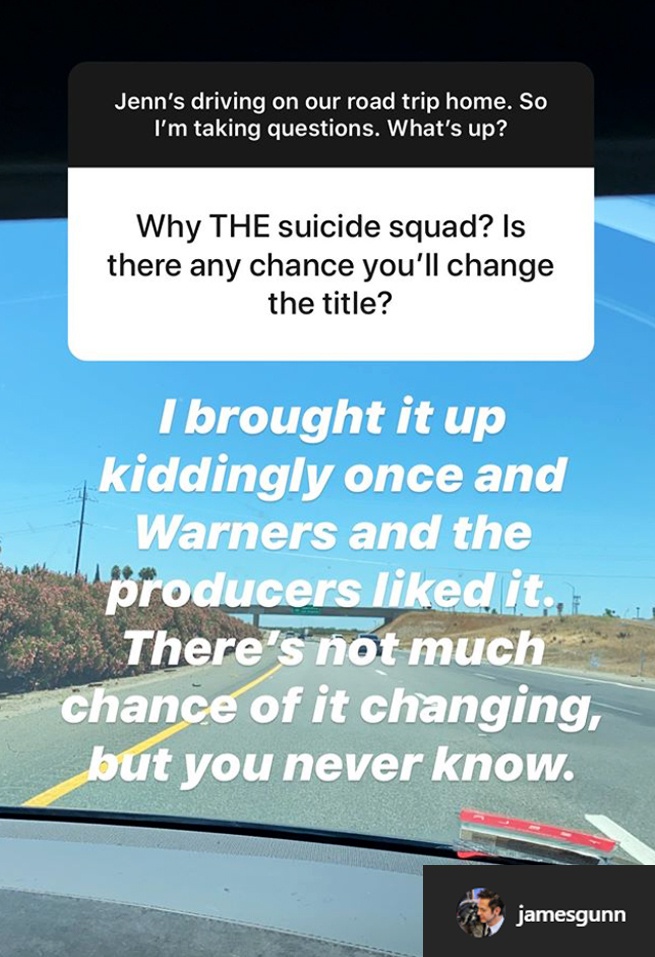 It seems like it will always be a mystery as to why the new film's title ended up as The Suicide Squad , which makes it difficult to know how exactly the new film will differentiate itself from the original . While a few of the first film's cast members are coming back, there are more than a handful of new actors and characters joining the party as well. Gunn has been both very open about some of the new characters coming in his film while at the same time being as coy as always by not revealing any plot details.

It would most likely come as a shock if the film's title were changed before its release considering how steady both Gunn and Warner Bros usually hold on their decision. The mystery of the new film's plot in relation to David Ayer's original film will likely remain one of the biggest mysteries in Hollywood for the better part of the 2020 before promotional material and more press releases start coming out for fans.

The Suicide Squad has completed principal photography and is currently in post-production. James Gunn and his team are preparing for the film's ultimate release in theaters on August 6, 2021.