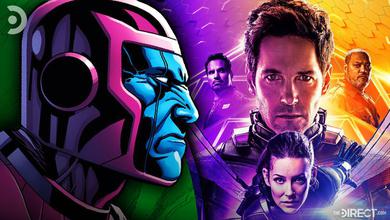 News has broken that Lovecraft County's Jonathan Majors has been cast for a leading role in Ant-Man 3. It's being reported that Majors "is likely to play the super-villain Kang the Conqueror." Many fans have speculated, since Avengers: Endgame, that after Thanos, Kang would be the most likely candidate as the next saga-spanning villain. However, it already seems like some casual fans are confused (and maybe even concerned) as to why Kang will be appearing in Ant-Man 3 (of all movies) first.

Let's break down why it is more than appropriate for Kang the Conqueror to appear in Ant-Man 3, how this appearance involves the Young Avengers, the possibility of Kang appearing in Loki, how Jonathan Majors' casting could have even wider ramifications for the MCU, and more...

Who Is Kang the Conqueror

He has had many titles: Rama-Tut, The Scarlet Centurion, Immortus, and Iron Lad, but he is most known as the one true ruler of timelines and realities - Kang the Conqueror.

In the comics, Kang the Conqueror is a frequent adversary of The Avengers, having fought the team countless times in the past, present, and future, while even battling a team of younger heroes calling themselves the Young Avengers at one point. Kang's favorite hobby is his namesake - taking over other less advanced timelines and realities for his ever expanding empire that spans the multiverse.

Before declaring himself Kang, he was born in the 31st century on an alternate version of Earth. There, he was a scholar who discovered time-travel technology originating from Victor von Doom. He used his technology to travel to ancient Egypt on Earth-616 (the prime timeline) and rose to power as Pharaoh Rama-Tut.

For a time, Kang even played the part of a super-villain called Scarlet Centurion with a suit resembling Doctor Doom. But, it wasn't until he traveled to the further off future of the 40th Century where he found his true calling. Seeing the might and destruction of this future's technology, he decided to use it to conquer all he saw and named himself Kang.

Importance of Scott Lang and Ant-Man

While Tony Stark was indeed the inventor of time travel in Avengers: Endgame, constructing a more refined and functional Quantum Tunnel than what Scott Lang had in the back of Luis' van, Stark is not the one to originally propose using the Quantum Realm as a means of time travel.

The original proposer of time travel in the MCU is Scott Lang.

And so, it is only logical that a villain such as Kang whose entire shtick is time travel would want to confront the two people primarily responsible for it in this timeline. Not to mention that due to Lang's and Pym's actions and contributions to its creation, several alternate timelines were created throughout the events of Endgame.

It had been previously rumored that Marvel Studios had been casting an actor to play a myserious "Benefactor" character. It's very possible that this could be Kang himself. When Kang eventually became a legendary figure in his time, he was actually called the Benefactor. He even had an alter ego that he would use in order to establish a business empire to gain power and influence in the 21st century. And so, Sonny Burch's employer who was briefly mentioned during Ant-Man and the Wasp could very well be this alter ego of Kang pursuing Hank Pym's life work.

The most exciting connection that Scott Lang would actually share with Kang is through his daughter, Cassie Lang, who experienced a significant growth spurt during the five year time skip in Avengers: Endgame. This has led to the conclusion from fans that Marvel Studios is preparing Cassie Lang to join the family business with one of her first enemies being Kang himself.

Formation of the Young Avengers

Technically speaking, Kang is the one that formed the Young Avengers team in the first place - at least, such was a past version of himself attempting to avoid a future of villainy and conquest by calling himself Iron Lad. To be clear, in the comics, Iron Lad has...absolutely zero relation to Tony Stark, he just decided to base his costume and title on him.

Shortly after forming the original Young Avengers, which was comprised of Kate Bishop, Patriot, Hulkling, Wiccan, and Cassandra "Cassie" Lang, the future Kang appeared in order to stop Iron Lad from drastically changing the future and preventing Kang's existence. In the end, Kang prevents Iron Lad from changing his fate and the timeline is restored.

Even after their leader, Iron Lad, is gone, the Young Avengers persist as a team, gaining new members. In fact, many of these characters are already rumored to appear before Ant-Man 3 even begins production. It has been rumored for ages that Wiccan and Speed would appear as Wanda's twin sons in WandaVision, alongside Hulkling seeking refuge at S.W.O.R.D. "in order to remain safely on Earth."

Two of the newer members on the team, Miss America and Kid Loki, have also been rumored to appear in the MCU in upcoming. Miss America Chavez herself will actually play quite a substantial role in Doctor Strange in the Multiverse of Madness, and one Loki casting rumor sounded suspiciously like a role for Kid Loki.

Of course, finally, there's Cassie Lang, who, in the comics, eventually gained the ability to naturally grow and shrink through repeated exposure to Pym Particles, becoming the hero Stature. So, by the time Ant-Man 3 actually releases, most of the Young Avengers members could already be lined up to appear and ready to face off against Kang.

Considering that Ant-Man 3 isn't planning to begin production until sometime in 2021, Jonathan Majors has been cast well in advance of his expected appearance. So much so that it's suspicious and could very well mean that Ant-Man 3 isn't the first place that audiences will see this actor in the MCU.

It was actually rumored since February that Kang the Conqueror would be introduced in Loki for quite obvious reasons. The show revolves around an alternate timeline version of Loki, the ones audiences saw abscond with the Tesseract in Avengers: Endgame. Presumably, after he escapes Asgardian justice, he's captured and imprisoned by the Time Variance Authority.

In the comics, the TVA is responsible for governing the ever expanding multiverse, including alternate timelines, and helping maintain them. Due to their government overseeing these multiverses, they often butt heads with Kang the Conqueror, who essentially rules over everything else the TVA doesn't control.

However, there is a version of Kang that is far less villainous and who works for the good of the TVA, going by the name of Immortus. Immortus is appointed to help work for the Time Keepers - beings made by the TVA who are meant to act as, essentially, the last group out the door before the end of the time and the universe itself. Audiences could see a more neutral or even good-natured version of Kang before we see the worst of him in Ant-Man 3.

In the comics, it isn't made entirely definitive who Kang's ancestor may be, since this can change depending on the comic writers and Marvel itself. It's most often considered that Kang is the descendant of Reed Richards with his actual name being Nathaniel Richards. Kang himself has also believed that, at one point, Richard's arch-nemesis, Victor Von Doom, was his ancestor instead.

To clear up confusion that could be caused from fans looking at pictures of Kang online, it's important to note that Kang's skin is not blue. The blue that we see is just a skin tight futuristic mask that forms over his face. With Jonathan Major being a black actor to portray Kang, it is entirely likely that Reed Richards and Sue Storm could be, at the very least, an interracial couple, and so fans should expect either Richards or Sue Storm to be portrayed by a black actor or actress. The same is possible for Doctor Doom's casting as well.

It's possible that Marvel Studios could go an entirely different direction and make Kang the descendant of someone not even hinted at in the comics. Considering one of his former identities was Iron Lad, Kevin Feige could very well make Morgan Stark, and therefore Tony Stark, Kang's ancestors. What doesn't quite work about this idea is that Morgan is still far too young to be involved in heroics, and it would be quite tiresome for Tony to indirectly be responsible for the creation of yet another villain.

One last potential curve ball that Marvel Studios could throw is having Riri Williams be Kang's descendant, who is already rumored to have her own Disney+ show in development. This connection would tie-in Iron Lad persona from the comics (who was never related to Iron Man in the first place), while also throwing off comic fans. It would also act as a transition into the new generation of heroes taking center stage, while still paying tribute to the heroes of the past.

Kang is one of the biggest villains the Avengers has ever faced, and so his appearance in Ant-Man 3 will not be belittling his character in anyway as it is already rumored that Marvel is turning it up to 11 for the Ant-Man threequel. In fact, Kang may not even debut in Ant-Man 3 and could very well first appear in other shows or movies, such as Loki or maybe even the Doctor Strange sequel being that the film deals heavily with the multiverse.

What we do know is that Scott Lang, Hank Pym, and now Kang the Conqueror are all set to appear in Ant-Man 3. It now seems obvious that Lang and Pym's contributions to the creation of time travel in Endgame have put them directly in Kang's line of sight for messing with time. Messing with time has actually happened in two movies so far in the MCU, Doctor Strange and Avengers: Endgame. Both times, the audiences were given ominous warnings about the dangers of messing with it from Mordo and Tony.

To paraphrase both characters: When messing with time, the bill always comes due with time messing back.