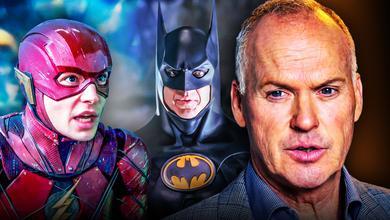 Warner Bros. is deep into its next stage of projects with filming taking place in numerous cities all over the world.

Included in this group of blockbuster movies is Ezra Miller's long-awaited solo movie The Flash, which is preparing for its theatrical release near the end of 2022. Cameras have been rolling for the last couple of months, although the crew bringing it to life is doing its best to keep as much as they possibly can under wraps.

Not only will this movie feature Ben Affleck's Batman and Sasha Calle's newly-introduced Supergirl alongside Barry Allen, but the hype is also building for the return of Michael Keaton's Bruce Wayne, who first graced theaters over three decades ago. While he will play at least some kind of role introducing the DCEU's Multiverse, it hasn't been clear to this point how big his role will be in the movie as a whole.

Thanks to a new YouTube video, fans have new information in this regard that could be huge for all parties involved.

YouTuber John Campea revealed on The John Campea Show that Michael Keaton's role in The Flash is significantly larger than initially expected.

Campea has spoken for months on the assumption that Keaton's return as Batman would be something of a cameo role in the 2022 solo movie, but his inside source said this is not the case. He will reportedly be fully suited up in the Caped Crusader's costume with Campea giving the following quote on the extent of his role:

"His role is at least as big as Sean Connery’s was in Indiana Jones and the Last Crusade. It’s that big."

When Keaton's casting was first reported, his role was described to be similar to that of Samuel L. Jackson as the Marvel Cinematic Universe's Nick Fury. His character is expected to fill a mentor role for Ezra Miller's Barry Allen, with the potential for the elder Bruce Wayne to appear in multiple DC movies in the future.

NO HOLDING BACK ON 1989 BATMAN

With so much of the movie still left to film, it's difficult to decipher how much screen time Michael Keaton's Dark Knight will see in his first DCEU outing. This is particularly the case when not only considering how many other heroes are in this story but also the fact that Keaton's inclusion wasn't made official until just a couple of weeks before principal photography began.

This report from Campea could change that way of thinking entirely, even for a movie star as famous and accomplished as Michael Keaton.

Looking at Indiana Jones and the Last Crusade, Sean Connery played one of the more important supporting roles as Indy's father alongside leading man Harrison Ford. Should Keaton's role truly compare to Connery's as he stars next to Ezra Miller, fans should expect to see him on screen for a substantial amount of time.

With most of the story details still being kept a secret, it's hard to pinpoint exactly what Keaton's Batman will actually be doing in this movie alongside the Flash, Supergirl, and the DCEU's Bruce Wayne played by Ben Affleck. No matter how those specifics shape up, Warner Bros. clearly has plans for one of the most revered superhero portrayals in DC history.

The Flash is currently filming and will release in theaters on November 4, 2022.