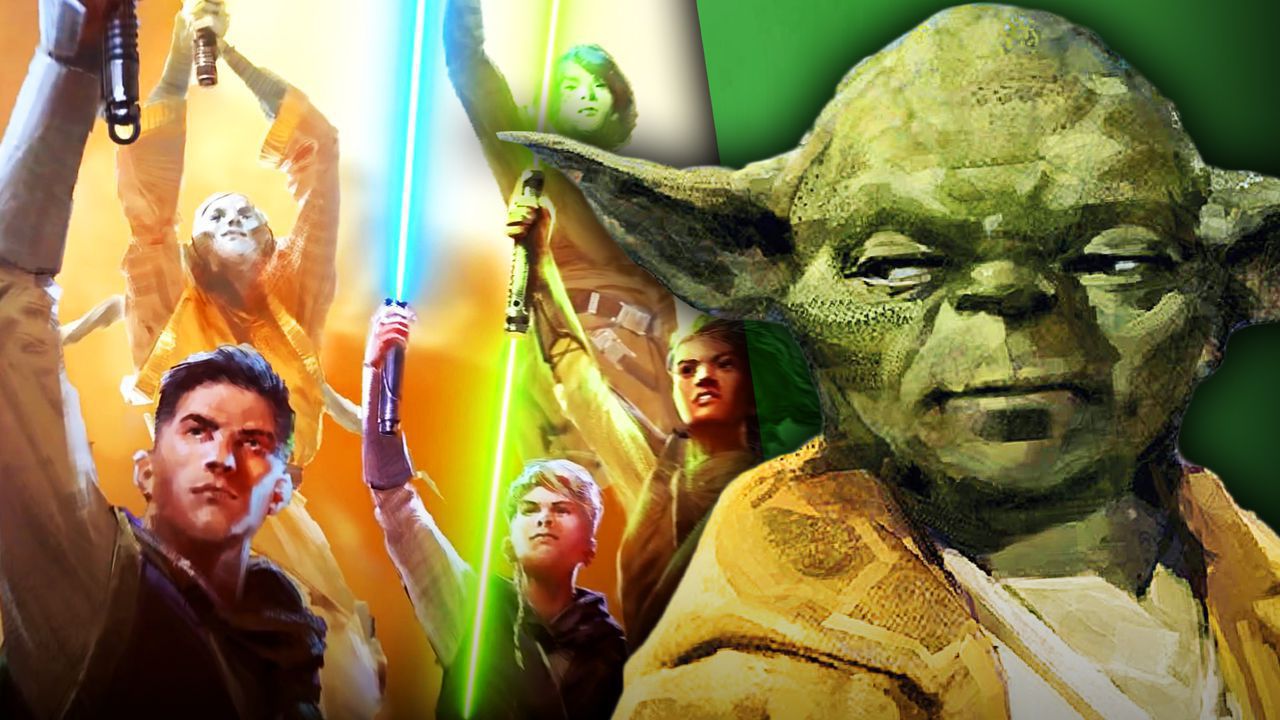 The future of the Star Wars franchise will expand in exciting ways under the realm of publishing due to the upcoming debut of Star Wars: The High Republic. The set of prequel stories will be set 200 years before the events of Star Wars: The Phantom Menace, exploring the golden age of the Jedi.

Unfortunately, the debut of The High Republic was delayed to 2021, but this didn't stop Lucasfilm Publishing from providing fans with more details about the much-anticipated novel. The High Republic has been confirmed to feature connections to the recently-concluded Sequel Trilogy, while the inclusion of Master Yoda presents an opportunity to both reference the prequels and original trilogy.

While speaking with The Hollywood Reporter, Star Wars: The High Republic - Light of the Jedi author Charles Soule shared interesting tidbits about his novel, and how it kicks off a new wave of stories under the golden age of Jedi. Soule described Light of the Jedi as "a disaster movie" and that it's going to be a "mystery:"

Soule pointed out that Light of the Jedi "will finally open the doors" to the Star Wars: The High Republic while also describing that "it's an amazing new time period" for Star Wars:

"Can’t it be both? Light of the Jedi will finally open the doors to the Star Wars: The High Republic for Star Wars fans – it’s the first huge piece of the actual story my High Republic collaborators and I have been building for years. A lot of the teases and such that have been released so far are focused on the character designs or the state of the galaxy…but I can tell you that we’ve all spent most of our time on the story itself. Light of the Jedi, Into the Dark, Test of Courage, the Marvel and IDW comic series… they’re really what The High Republic is. It’s an amazing new time period for Star Wars, but it’s the story that will get fans hooked.

And so, having the responsibility of introducing that story with the first novel out of the gate… I’m thrilled that I got the opportunity, and I took it very seriously. The scope of Light of the Jedi, and the fact that so much is sort of keyed to it… I’m obviously aware of all of that, and knew it when I took the job. Is it a little intimidating? Sure. But I really think it inspired me to work at my highest level. I’m very proud of the book, and I can’t wait to see what people think."

Interestingly, Soule shared how the concept of The High Republic was built, and he acknowledged that the intent of doing so is to create a "massive new chapter in Star Wars history:"

"The High Republic was an idea that emerged from some massive story retreats that took place at Skywalker Ranch with the five writers, Lucasfilm Story Group, editors, and execs in the early days of what we then called “Project Luminous”. Our mandate was always to create a massive new chapter in Star Wars history, able to be told across multiple publishers and mediums, with something for everyone… from casual fans to the sort of person who knows Jabba the Hutt’s uncle’s name — that would be Ziro.

We needed to make something authentically Star Wars but also brand new and fresh. It was a challenge. We had a lot of ideas on the table, and ended up settling on The High Republic era in part because it allowed us our own corner of the galaxy, where we could use established continuity to some degree if we needed or wanted to, but could also do entirely new things. The elements of the story include bits from literally everyone’s pitches, which is a good thing – from characters to vehicles to creatures, we all were able to contribute our own ideas.

As far as, was there discussion of other approaches – absolutely! We talked about everything. Nothing was off the table. It was a blast. But I’m not going to lay any of that out here – we’re keeping a lot of those ideas in our back pockets for future storytelling in the publishing space, whether in The High Republic or elsewhere."

Soule also touched upon the structure of Light of the Jedi, describing it as a way "to explore genre in a way we hadn’t directly seen in the franchise:"

"My personal mandate for Light of the Jedi was to explore genre in a way we hadn’t directly seen in the franchise – to bring the concepts of Star Wars to places that would feel fresh and cool. It’s a disaster movie; it’s a mystery; it’s a race-against-time-team-on-a-mission story.

I also wanted to try some new things within my own novel-writing style — experiments with pace and tension and intercutting and the way secrets get revealed. The structure of the novel is unusual, in some ways, but I got that from the Star Wars films, really. If you break down Star Wars: The Empire Strikes Back, the timeline doesn’t make a lot of sense — but it still works. Light of the Jedi has some of that going on. It’s elastic — the story can stretch and pull as needed, and then at the end, it all snaps together for what I hope is one hell of a punch.

The Light of the Jedi author also revealed how the interconnected storytelling will work for The High Republic, teasing that "there are certain key events that happen at the “same time” across the storytelling:"

"One of the primary concepts of The High Republic initiative is the idea that there are certain key events that happen at the “same time” across the storytelling. It’s a lot like the way the destruction of the first Death Star in Star Wars: A New Hope has been seen from endless angles since it was first depicted in the first film.

Those are all mapped out – there’s a document with all of it laid down. The “Great Disaster” that opens Light of the Jedi is one of those. I thought it would work because of the things you cited — the idea of having a lot of people involved in one event that operates on a galactic scale seemed very appealing. I could introduce a large cast in a very organic way, in various locations from the highest levels of galactic government to the “Jedi on the street” as they respond to the disaster.

Plus, it’s a chance to show heroism in many different ways. Light of the Jedi has plenty of lightsaber action, but that’s not the only way to solve problems, and you don’t need the Force to be a good person. There’s a sort of slogan that pops up in the book: “We are all the Republic,” and the Great Disaster seemed like a perfect way to reflect that idea."

Lastly, Soule gave an intriguing tease on what lies ahead for The High Republic and how Light of the Jedi will set the tone for the story to go into "incredible places" down the line:

"I hope I’ve conveyed that The High Republic is a huge story, multifaceted, meticulously built to give anyone who experiences it that real deal Star Wars we all love. We’ve had some of the legends of the franchise contribute to its design and visual storytelling — Iain McCaig, the Lucasfilm Art Department and more — and the intricate details of the world-building have been given the full support and power of the mighty engine that is the Lucasfilm Story Group. A lot of people who care very much about Star Wars have been involved — and we’ve swung for the fences.

I mean, we’ve barely scratched the surface of the story here. We haven’t talked about the Nihil — the main villains of the piece, who are a group of anarchic marauders with some unique abilities that make them very powerful and very dangerous in this era. I wanted to paint them as truly frightening — the villains we’re used to seeing in Star Wars at least have some sort of loyalty to an ideology or code… the Nihil do not, except perhaps to do whatever they want whenever they want, and to destroy anyone or anything that opposes that goal. They have a deep and detailed history that will be explored throughout the initiative — the Nihil and what they get up to is one of the coolest parts of the whole thing.

It all begins with Light of the Jedi. The heroes, the villains, the worlds, the concepts, the weirdness (Ensign Peeples!), the sacrifice and heroism and tragedy and inspiration… it all starts with this book, and it goes to incredible places. The scale of this whole thing is wild. This is not small. It’s an epic, from start to finish. Can’t wait to see what folks think."

With so much to unpack, it's clear that Lucasfilm Publishing is going all-in when it comes to expanding the lore of Star Wars through The High Republic. Soule's revealing comments indicate that The High Republic has a massive scope, and it presents an opportunity for the writers to freely explore the franchise in surprising ways.

Based on Soule's remarks, it's safe to say that Light of the Jedi will serve as the catalyst of the major events of the narrative that The High Republic will explore. Given the interconnected nature of storytelling that will be adapted, it appears that a unique kind of world-building will be in play, and this certainly treads new ground for the franchise.

Part of the fun of the Star Wars franchise is telling stories from a different perspective, and it seems that The High Republic will follow that proven formula. It remains to be seen if this golden age will serve as the blueprint of future live-action stories, but it clearly has the potential to be explored in the future.

All things considered, it's possible that The High Republic will change the franchise in many ways since it provides more story opportunities for other avenues in the future.