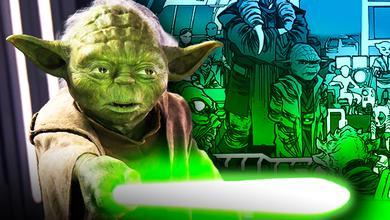 One of the newest projects at Lucasfilm is the story of The High Republic, a period in the Star Wars timeline set 200 years before the Skywalker Saga, when the Jedi Order was at its peak. Lucasfilm intends to tell a canonical overarching story of this particular time through both comics and books.

The High Republic launched January 5, 2021 with the release of two novels titled “Light of the Jedi” and “A Test of Courage.” While this era may be new to Star Wars fans, there is one familiar character from the Skywalker Saga who readers can expect to see, particularly in The High Republic Adventures comics.

A LOOK AT HOW YOUNG YODA'S LEADS HIS PADAWANS

StarWars.com has featured a preview of IDW Publishing's Star Wars: The High Republic Adventures #1 comic, offering a peek at the story and a look at how a younger Jedi Master Yoda taught his Padawans.

In Star Wars: The High Republic Adventures #1, Yoda, a promising Padawan named Lula Talisola, and several other Jedis-in-training are aboard a Padawan Academic Cruiser when they receive a distress call that only they can answer.

Apart from the absence of a few wrinkles, so far these panels show the Yoda fans know right down to his signature style of syntax.

From these few panels, it appears young Yoda isn't only similar to older Yoda in how he speaks, but also in how he leads. In both the films and Star Wars: The Clone Wars animated series, Yoda doesn't pretend to know all the answers but is always gathering information while being patient. So far, that's exactly what we're seeing in this new comic as well.

Using Yoda in any capacity is a major risk, especially seeing as he's one of the most popular and identifiable characters in movie history. His look in these comics has raised some eyebrows amongst fans, but the real question is whether these comics are willing to show the Jedi Master in his prime in a way that's not strictly limited to appearance.

The High Republic Adventures #1 will be available for purchase on February 3.